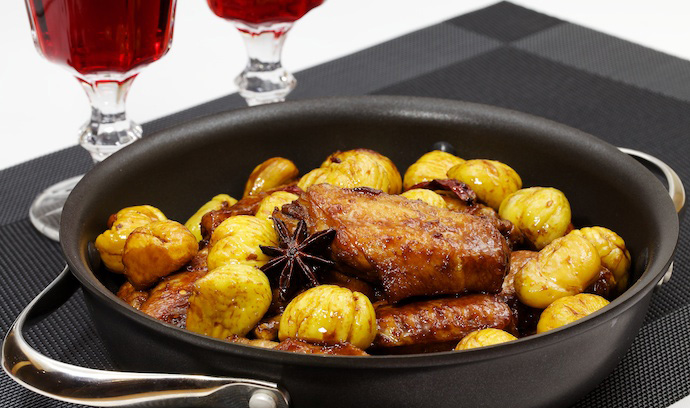 Let’s begin with a story. Chestnuts appear in many Chinese legends, but the most famous one is about Empress Dowager Cixi.

It is said that in the Gengzi years when the Eight-Nation Allied forces invaded the city of Beijing to put down the Boxer Rebellion, they defeated the Qing military causing a great humiliation. This caused the Empress to flee the royal capital and in so doing she neglected to take any food for her journey.

As she traveled she became very hungry after a while, and upon meeting some peasants on the road, they graciously gave her some of their Wotou. Back then, Wotou, a poor man’s meal, was made of ‘stick’ noodles (steamed sticks) and red potato noodles.

Empress Cixi was so hungry, and putting all dignity aside, she grabbed the food and stuffed the welcome meal into her mouth. It was the best thing she had ever tasted! Later, after negotiations were signed and a memorial service held, Empress Cixi returned to the Forbidden City.

Upon her arrival, she was reminded of the fragrant and opportune meal of Wotou she had been given by the peasants when she first fled Beijing and commanded the Royal kitchen to prepare it for her.

The Royal kitchen knew that Wotou was really steamed sticks and red potato noodles, and were afraid to offer this to Empress Cixi lest it offends her. Racking their brains, they finally thought of a palatable substitute – chestnuts! Cixi was very happy with the result, and from then on this dish spread beyond the palace taking on the name of the old Beijing.

Compared with other starchy ingredients, chestnuts are no doubt the best loved. It is said that sweet potato tastes like chestnuts, but it is never said that chestnuts taste like sweet potato. Chestnuts are often added to dishes as a finishing touch, and today I am introducing you to Chestnut Chicken as one example.

How to peel  chestnuts

Although chestnuts are delicious, it is universally known they can be difficult to peel so, here I have a challenge for you and your classmates. However, if you are having trouble you can buy peeled chestnuts.

Here are some tips for successful cooking with chestnuts. There are two steps you must take before you can use the chestnuts.

Some methods use a knife to cut a cross-shaped incision in the top of the chestnut, but this is dangerous and poses too much risk to the hands. My way is to put the chestnuts flat face down on the chopping board, and cut off the tail. 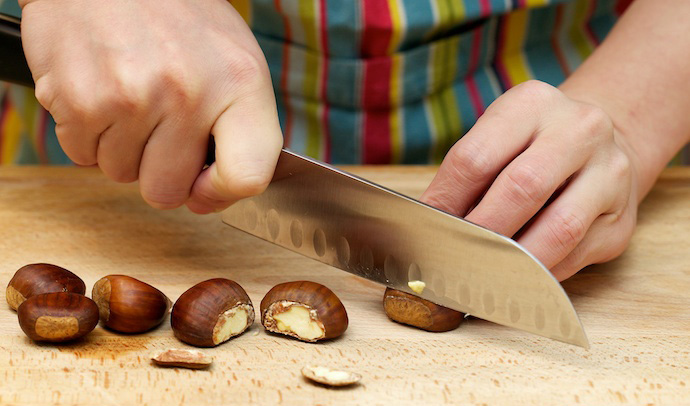 Then, insert the tip of a small knife at the tail of the chestnut and gently pry, cracking the skin, enabling it to peel away. Now, some of you might wonder what I’m talking about when I said peeling chestnuts can be challenging, but the most difficult step is yet to come! 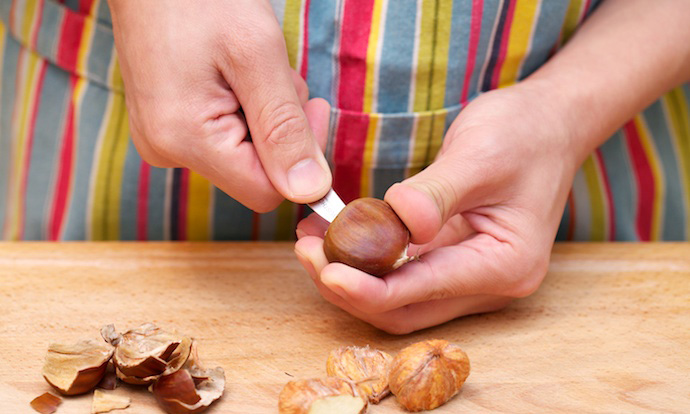 The chestnut skin which wraps the outside of the pulp is very fragile, and you must be gentle with it so as not to tear it. The solution is to half-fill a small pot with water and heat it to about seven or eight degrees celsius, then turn it to low. Put five or six chestnuts into the water, blanching for about 3 minutes, which expands the skin making it easy to peel off.

This must be done quickly, however, because as the chestnut cools the skin tightens. Only five or six chestnuts should be heated at once so they heat quickly and won’t crack from being in the water for too long.

In most cases, this approach is easy to do, but every now and then you will encounter some varieties of chestnuts that are more difficult to peel. 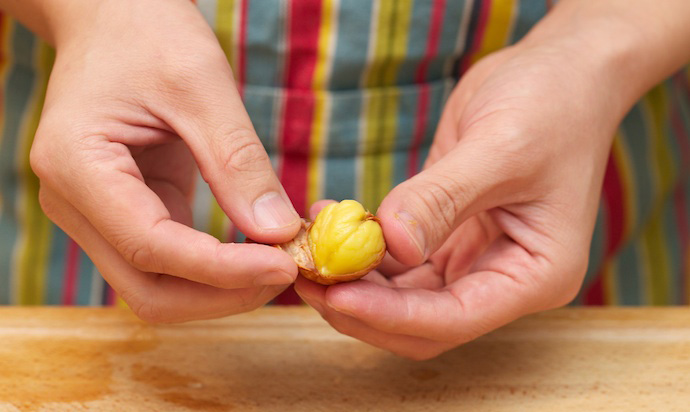 And now to the recipe!

You will need the following ingredients for Chestnut Chicken:

Now let’s talk about preparing the chicken wings. Fresh chicken has a smell, and after freezing this smell will be more obvious, but high-temperature treatment is a simple and effective way to rid the smell. Wine is sometimes used in Western meat cookery to rid the ‘fishy’ smell from raw meat, but the most conventional way is to put the meat in a very hot pan to make it color, that is, to “brown” the meat.

This shallow frying is effective in dissipating the fresh meat smell, however, the oil tends to spatter which can be annoying. Deep frying is more effective, but some students are concerned about the excess oil use, but the process of deep frying causes some of the oil in the chicken skin to be lost, and so the two offset each other.

Take a relatively small pot, pour in enough vegetable oil, to cover the chicken wings. Heat the stove to 180 degrees Celsius, and deep fry the chicken wings in batches, for 1-2 minutes each until the chicken wings turn slightly golden. Smell the fried chicken wings and you will find the effect of frying is more effective in getting rid of the smell than boiled water. 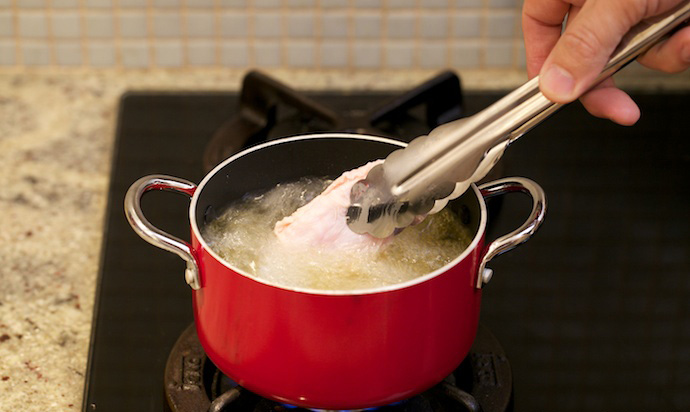 After the chicken wings have all been fried, take a heavy-based, non-stick pan, and preheat for 1 minute. Add the ginger, garlic, star anise and red pepper, and stir-fry constantly until fragrant. 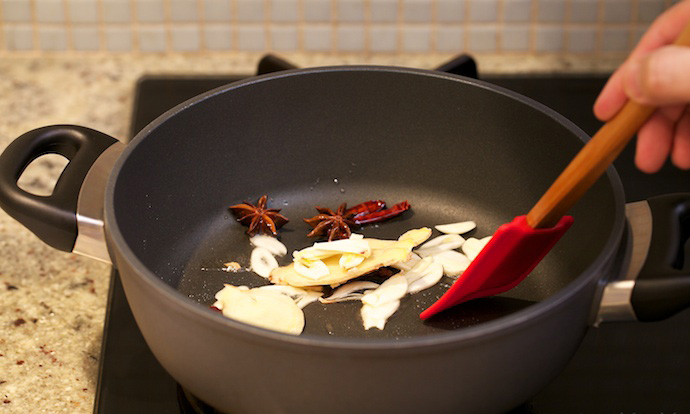 When the edge of the garlic is golden yellow, put the fried chicken wings into the pot and stir-fry evenly. Add 30 g of sugar and continue to stir-fry until the sugar dissolves. 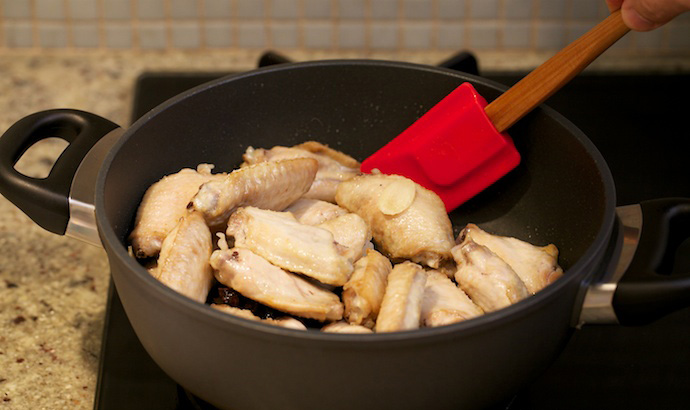 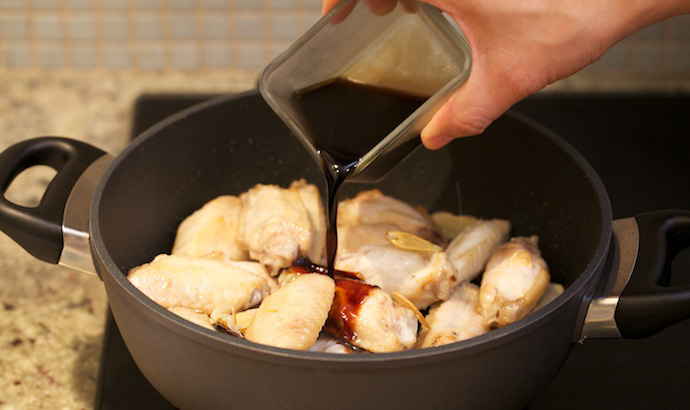 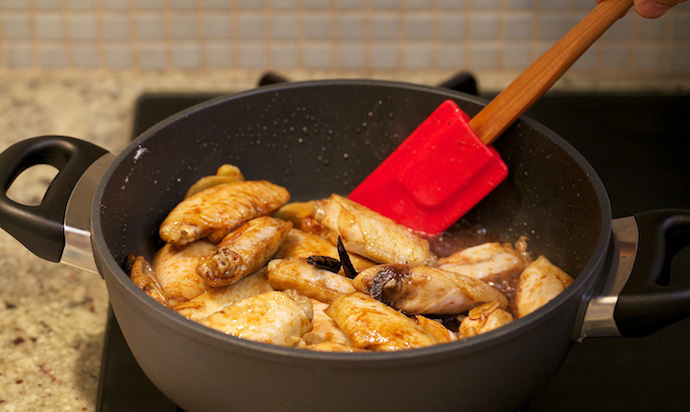 Add 300 g of peeled chestnuts (do not stir-fry, let the chestnuts sit on top of the chicken wings), cover and cook for 11 minutes. While heating, open the lid every 2-3 minutes and flip a few chicken wings and chestnuts, and quickly replace the lid. 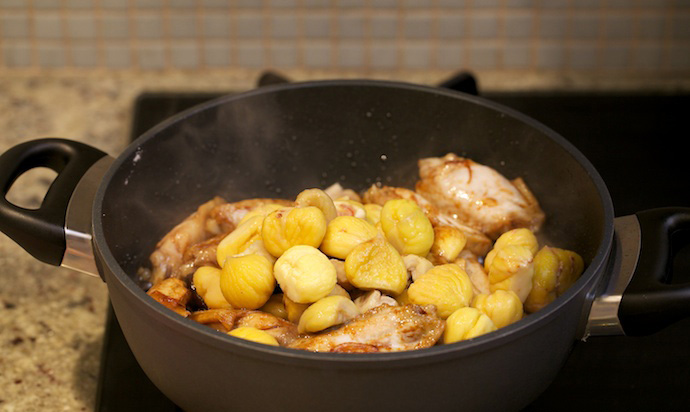 After 11 minutes remove the lid and cook to reduce the liquid to a small amount of transparent grease and brown caramel for serving. Take the pot to the table and serve straight from the pot.

Although the chestnuts taste sweet, the texture is compact and smooth. In ordinary cooking, it is difficult to integrate chestnuts with other flavors, but using this method of reducing the liquid and forming a sticky caramelized sauce they easily take on a variety of flavors as the sauce coats the surface of the chicken wings and chestnuts.

11 minutes cooking (covered) is just right for chicken wings, and brings out the taste of the soft waxy skin with Huanen chicken, making this home cooked dish bursting with amazing flavor. 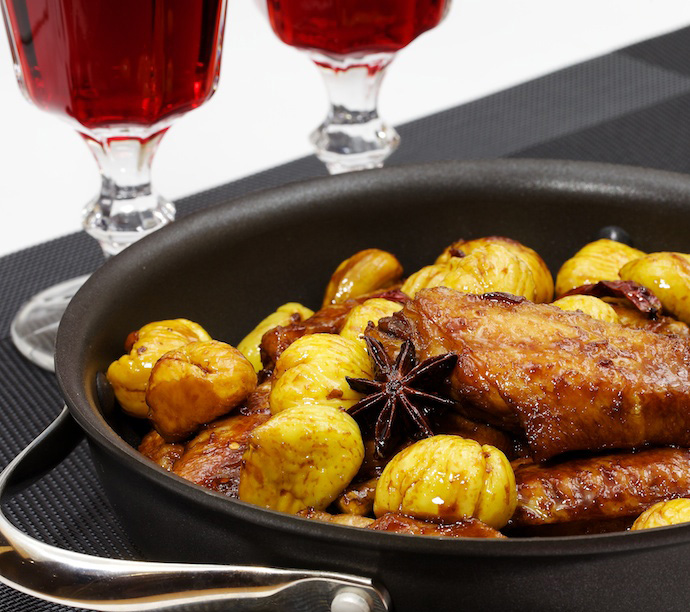