A fantastic meal for any seafood lover! This fried shrimp recipe is guaranteed to please everyone who tries out and shares this recipe!

This particular recipe originated in the Typhoon shelter. In China, when talking about typhoon shelters, everyone will be tempted to think of all kinds of delicious Hong Kong-style teas and dishes.

In fact, not only is it very important in the culture, but throughout Chinese history. 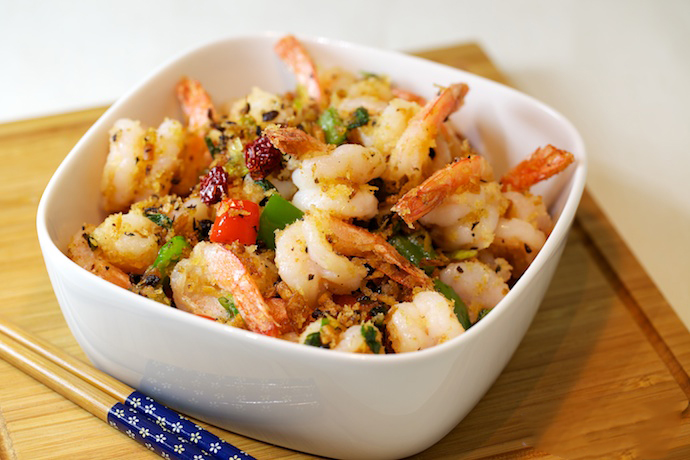 In order to help small fishing vessels avoid typhoons, the Hong Kong government successively built about 20 typhoon shelters along the coast for their ships.

When the typhoon arrived, the surging waves on the outskirts were stopped by the breakwater. The water in the typhoon shelter would be calm.

The original intention of the government was only to provide shelter for ships for a short period of time. However, for many poor fishermen, Hong Kong bays, which were very expensive, had no place for them.

They could only live on boats. Many immigrants from Vietnam in the 1960s and 1970s would also join their teams, and the typhoon shelter gradually became an independent small society.

They had their own unique language and customs, as well as foods. 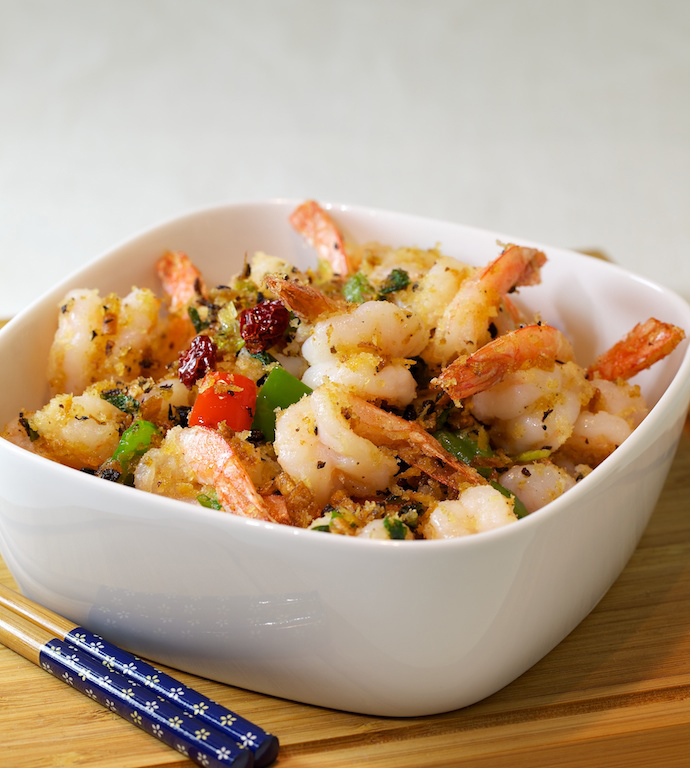 Before the improvements made in the 1990’s, the fisherman and their families were very limited in the commodities they had access to.

For example, they had to live on their boats, there was no system for clean water or properly dispose of waste and the children had no access to the formal schools of the city.

As a means of livelihood, many boats in typhoon shelters also provided catering services. In such a developed place in Hong Kong, cooking methods will naturally be affected by the West and immigrants. 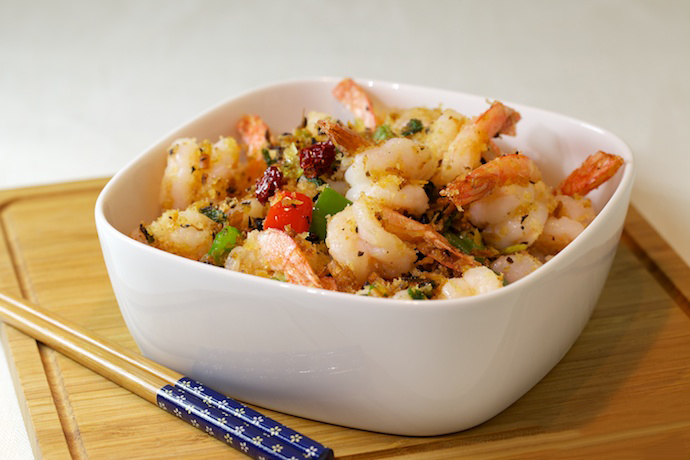 The traditional typhoon shelter fried shrimp is made of whole, peeled, shrimp.

Many flavors are attached to the shrimp shell, so here I use shrimp with the head removed but retaining tail.

And now the production:

Step 1) Dice the Garlic, then soak in clean water and rinse, otherwise the garlic will become black and bitter after being fried. Then cut the dried red pepper and green onions into small pieces. 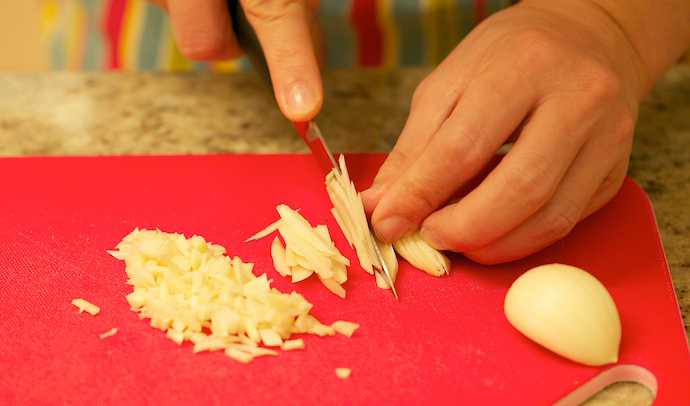 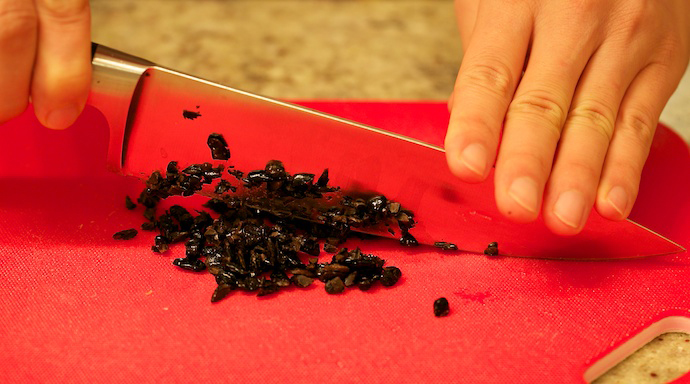 Step 3: Cut the green peppers and red peppers into small 1 cm squared pieces and set aside. 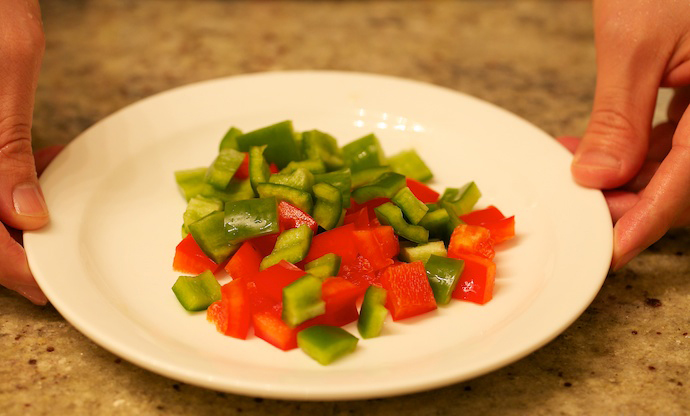 Step 4: After soaking the garlic for about 30 minutes, drain and squeeze out the excess moisture. Because the garlic will be fried as well, lay on a paper towel so that it will soak up any extra moisture still there. 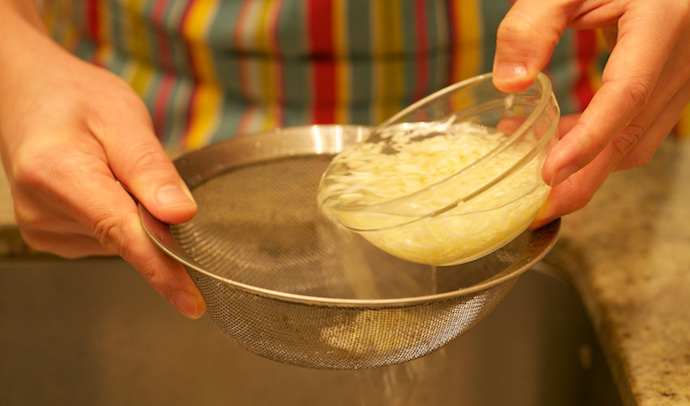 Step 5: The same process for the garlic must be done with the shrimp. Rinse, then pat dry with a paper towel. 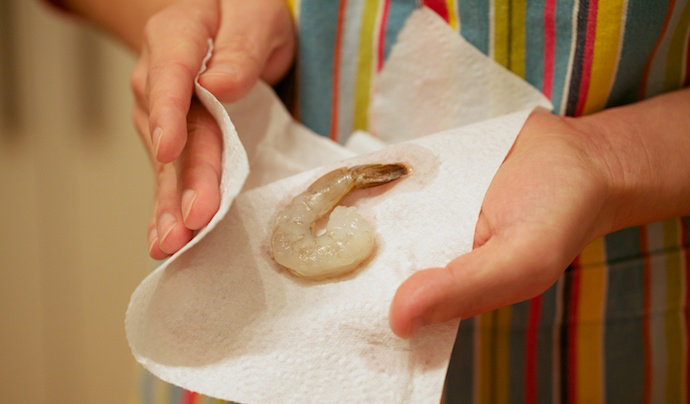 To get some extra flavor into your shrimp, you can cut, using a knife, the back of the shrimp, which is roughly equivalent to about 1/2 the depth of the shrimp body, so that when it is heated, it will inflate the shrimp to look larger and absorb more flavors. 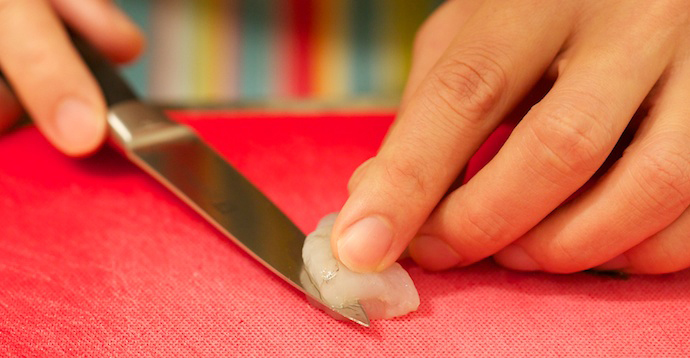 Step 6: Place the shrimp on a large plate, sprinkle about 10 grams of flour, and mix well by hand. The flour will not only absorb the extra moisture, but also give the shrimp a crispy outside layer. 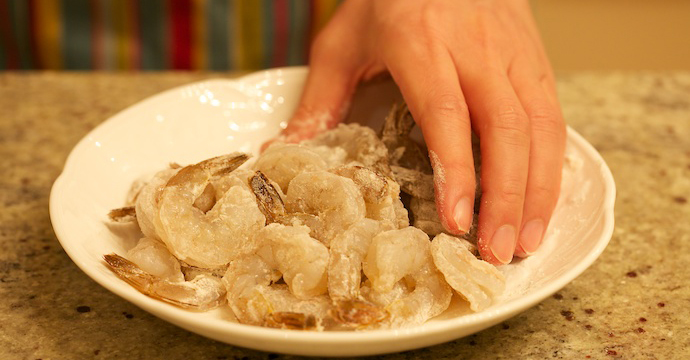 Step 7: Next, we fry the shrimp, garlic, and breadcrumbs. Take a small, non-stick pot and fill it about half full with peanut oil. Heat it to 160 degrees Celsius on the stove. (How to determine the temperature of the pan, a very simple and straightforward answer, buy a thermometer!) 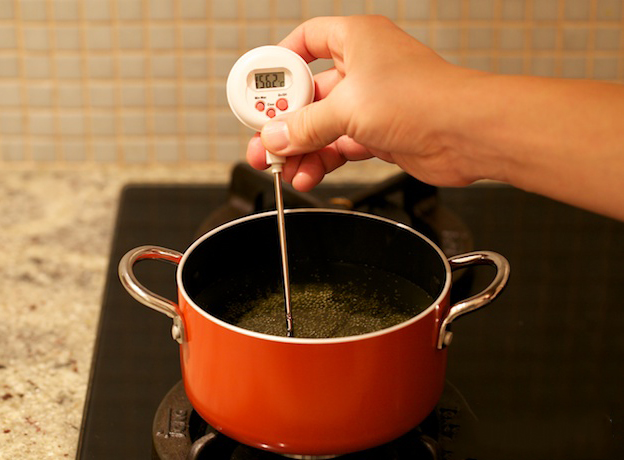 Step 8: Use chopsticks to put the shrimp in the pan. Because the pan is relatively small, don’t put too much at one time. About 5 or 6 will be enough. 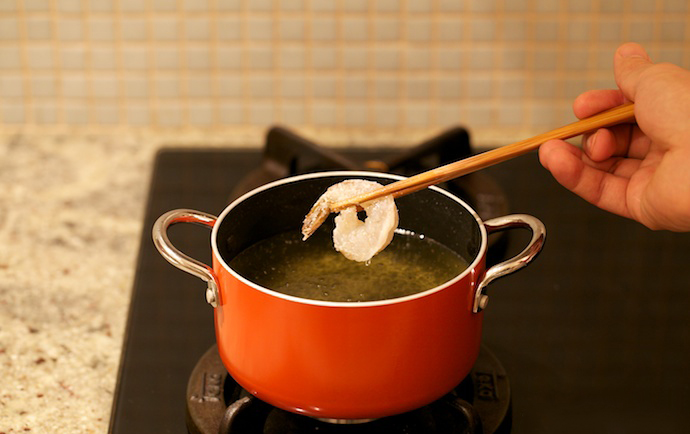 Step 9: When the shrimp is no longer translucent, and the body of the shrimp is curled (which only takes about ten seconds), it can be removed and placed on a paper to remove excess oil. Then repeat the above process and fry all shrimp. 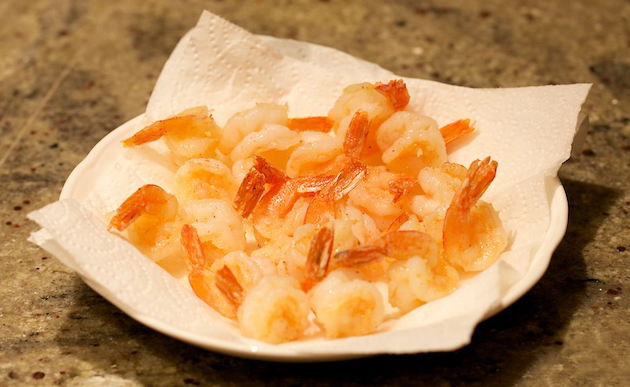 Step 10: Now we begin to fry garlic. After being fried, you will notice the strong smell. Add the garlic into the pan and observe closely as it will cook very quickly. 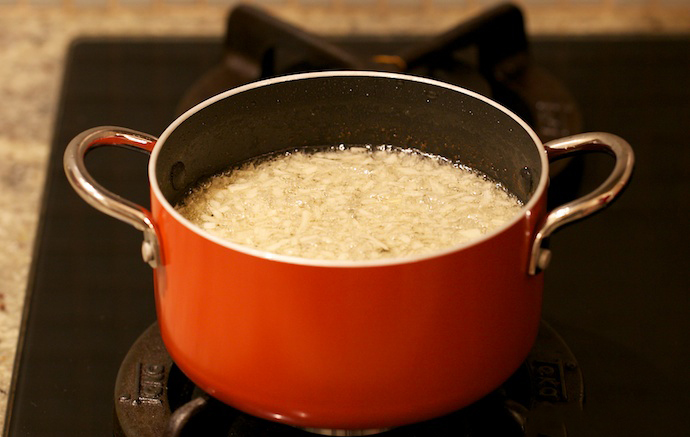 Step 11: Wait until the garlic begins to look dry, and when the surface begins to change color, then pour in the bread crumbs and fry it together.

When garlic and bread crumbs begin to turn a golden color, use a handheld sieve to remove the contents and place on a paper towel to dry. The time it takes for the bread to fry in the pan is related to the moisture content.

If the moisture content is high (such as the bread crumbs that have just been tossed out with fresh bread), you need to put it in early. 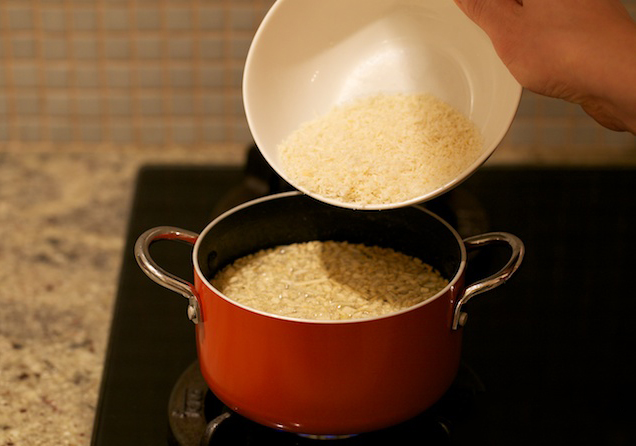 Step 13: Add the green peppers and red peppers, and stir fry quickly until they begin to soften. 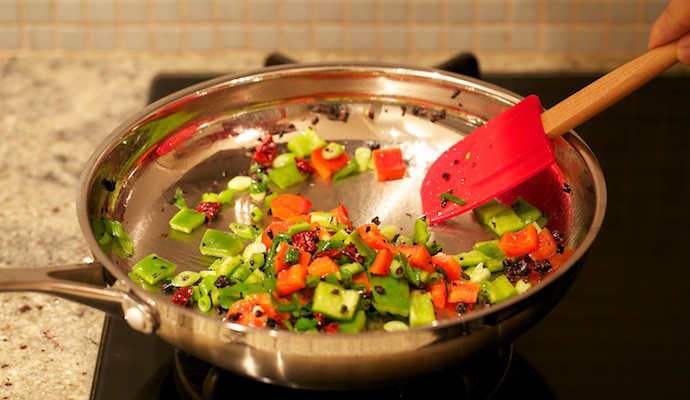 Step 14: Add salt according to your liking (because the fermented black soybeans themselves are salty, be careful when adding salt, don’t put too much), then add 10 grams of sugar. 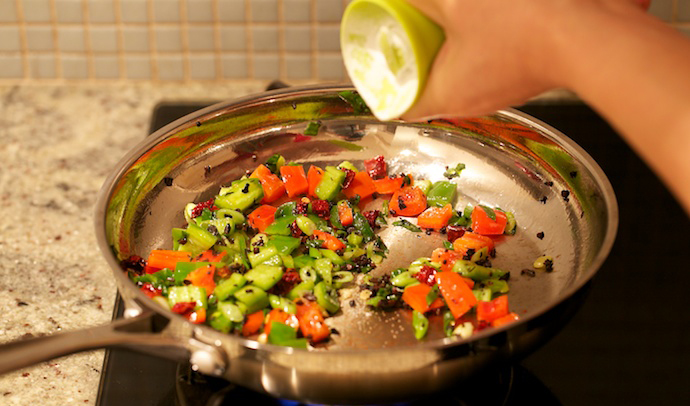 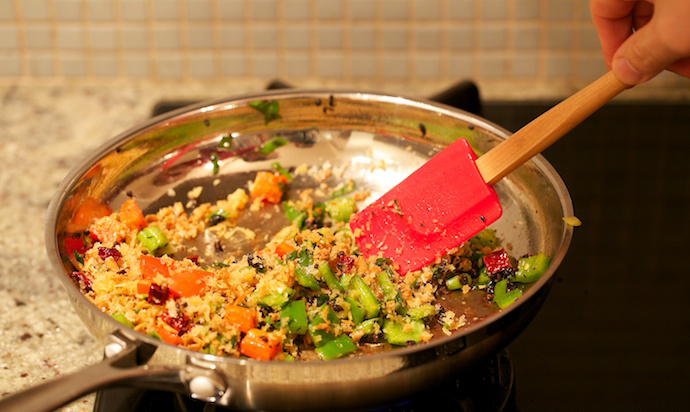 Step 16: Put the fried shrimp and gently flip it to make the shrimp and bread crumbs, garlic crisps, and other seasonings fully incorporated.

At this time, you need to taste, and if necessary, you can add some salt to taste. 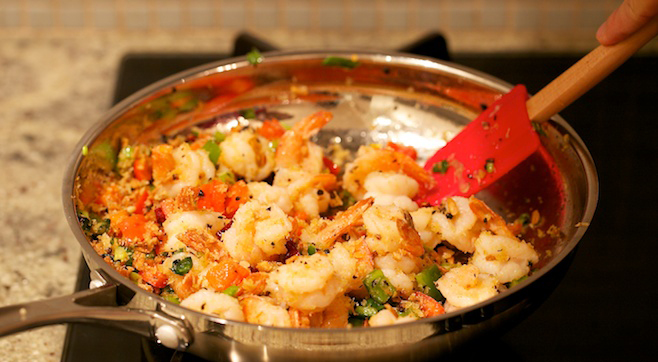 This dish is positively going to please your taste buds, from the first bite until the last.

Note that this dish is best eaten hot and as soon as possible. Once cool, the flavor will begin to diminish.