Chinese cuisine is very popular throughout the world, especially in Japan where it graces many a dinner table. Dishes such as Mapo Tofu, Green Pepper Pork, and Twice Cooked Pork are all well loved in Japan.

Refreshing and nutritious Chinese Cold Noodles are also very popular in Japan, especially in the summer, often served in homes as well as hotels, and restaurants all over the country. 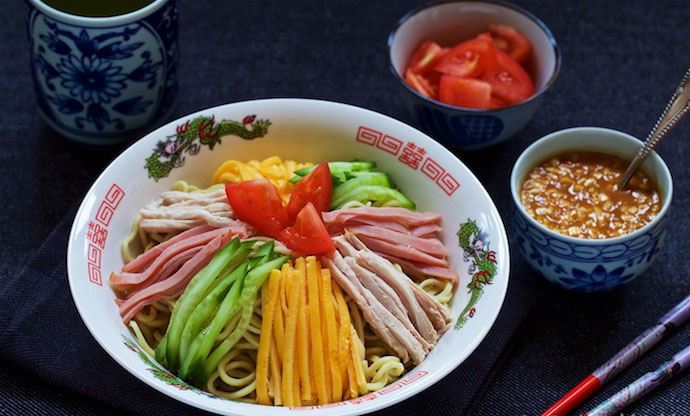 As its name suggests, Chinese cold noodles come from China. In 1859, under foreign pressure, Japan’s ruling Edo shogunate near Yokohama, sectioned off a region for foreigners, which had the same concessions as China at that time.

During this period, the concessions of Shanghai and Hong Kong were quite substantial causing many foreign businessmen to cross the sea to Japan to expand the flour market. 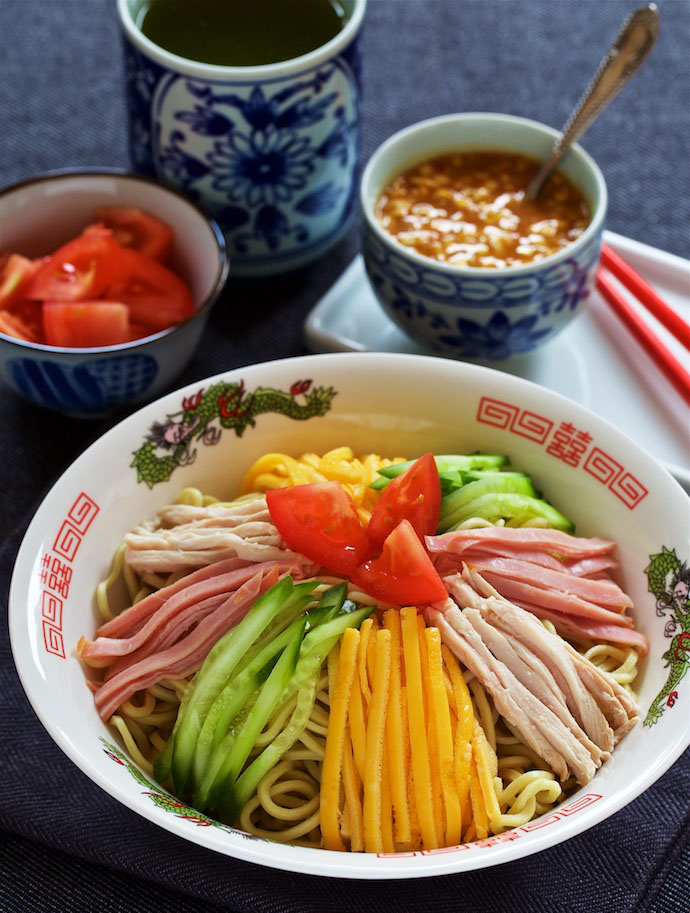 The Chinese people began settling mostly in Yokohama which eventually became Asia’s largest Chinatown. The summer heat and the absence of air conditioning, meant cooking was kept to a minimum, and so eating cold noodles become the best option for Chinese people.

In 1936, “Nutritious Food” magazine published an article on “Three Strip Cold Noodles with Sesame Sauce,” which is probably one of the earliest forms of cold noodle dishes, where the “three strips” are chicken, pork and cucumber strips. Chinese cold noodles served today have not departed much from this.

After the defeat of Japan in 1945 and its subsequent economic collapse, rice became a luxury, and the people were reliant on the US supply of flour. Repatriated soldiers and immigrants also influenced China’s eating habits and cooking methods, so that China’s cold noodles gradually become a staple. 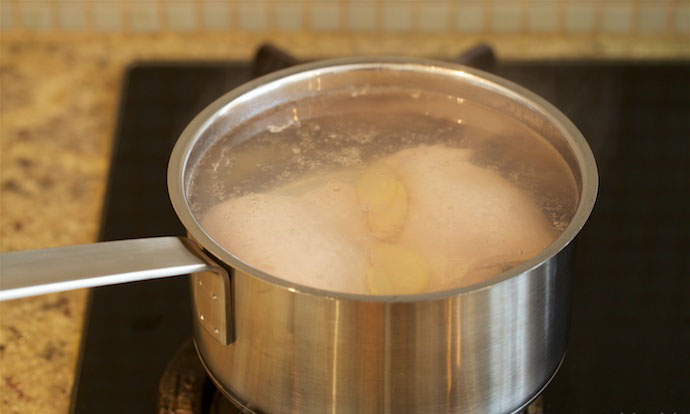 Take an 18 cm soup pot and add 1 liter of water. Bring to the boil and add the two chicken thighs and ginger, turn to low and simmer for 20 minutes.

Turn off the stove and replace the lid, and leave to stand in the hot liquid for 30 minutes. The chicken skin and chicken bone protect the meat making it softer and juicier. 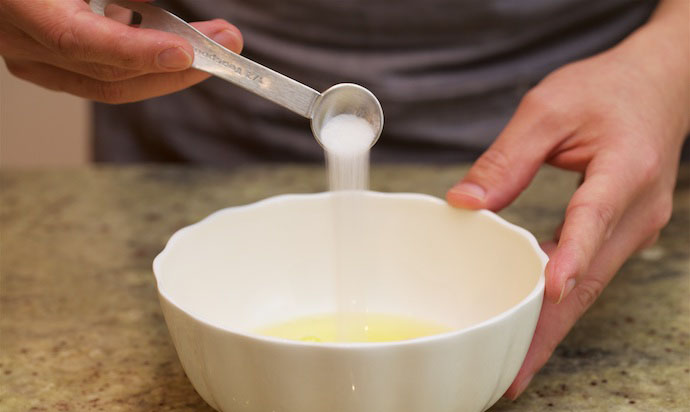 While you are waiting for the chicken to cook, prepare the other ingredients. First, fry the eggs. Place two eggs into a bowl and add ½ teaspoon of sugar. 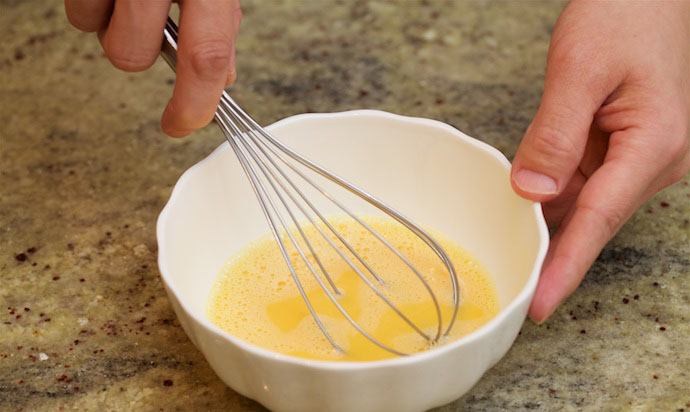 Beat the eggs evenly with a fork.  Uneven mixing of the protein and yolk will produce an uneven thickness and a yellow and white appearance to your cooked eggs. You want an even yellow color throughout. 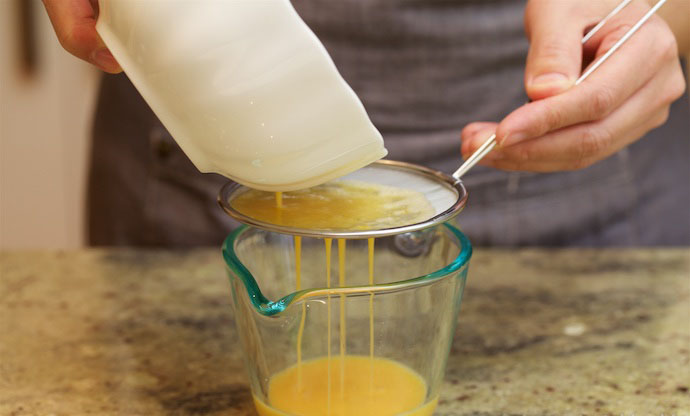 The eggs will take a while to beat to a uniform color and consistency, and thus a foam will form on the surface. You want a smooth surface with no bubbles on the cooked eggs. Strain the eggs through a sieve to remove the bubbles. 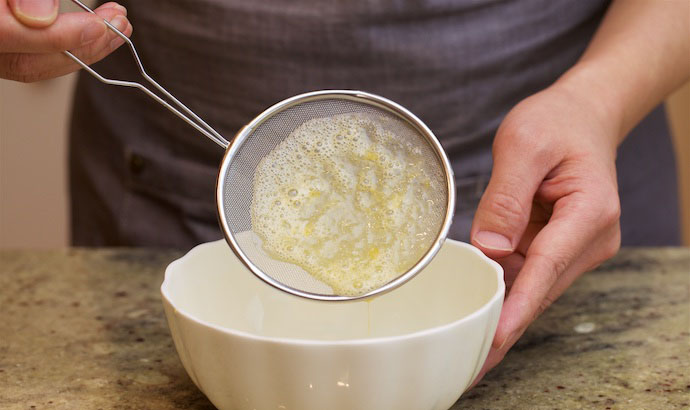 Look, the foam is all collected on the sieve. 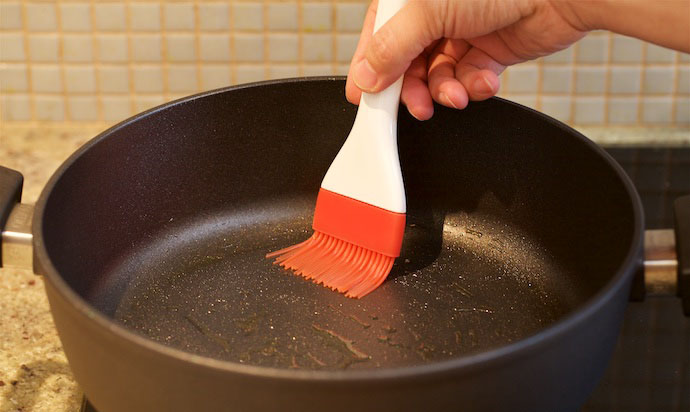 Omelet making takes a while to master so you get a nice even mixture that does not stick to the pan. Heat a 28 cm, heavy based non-stick pan, and heat on low to 60 degrees Celsius.

If you can hold your finger on the bottom of the pan for 3 seconds, the temperature is 60 degrees. Any longer and the pan is not hot enough, shorter and it is too hot. Brush 1/2 teaspoon of sesame oil on the surface of the pan. 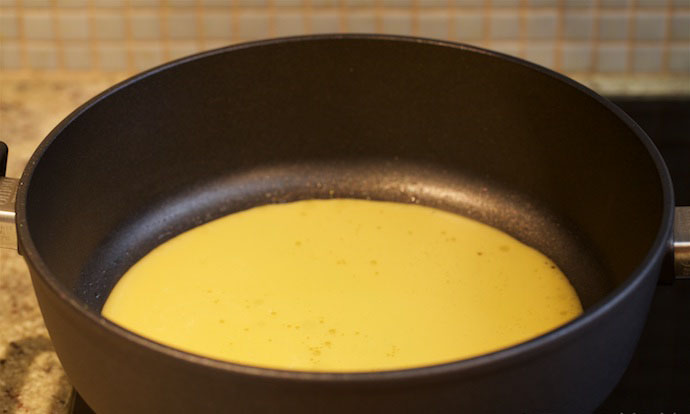 Slowly pour the egg into the pot, continuing to heat on low. It takes a while for eggs to form a skin on the top, so you will need some patience. If the pan is too hot, the egg will wrinkle, affecting the finished product. Once the eggs have fully solidified on the top, slide the omelet onto a plate to cool. 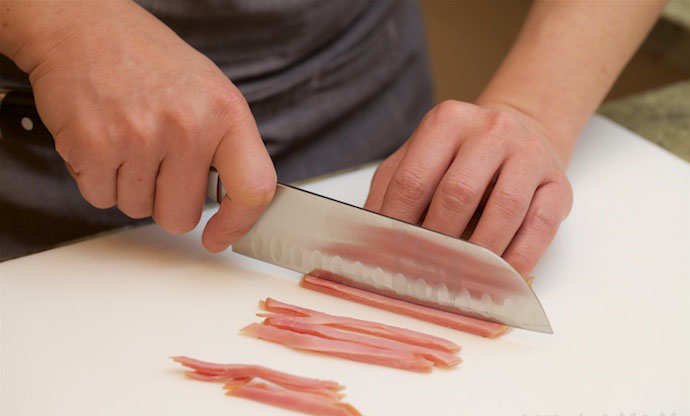 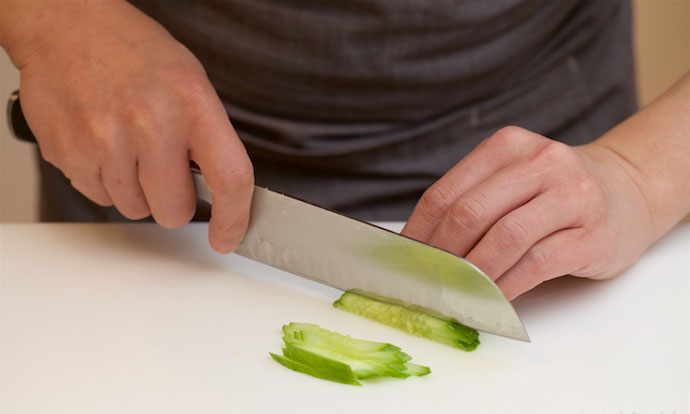 Slice the cucumber and then slice these into 3 mm thick strips. 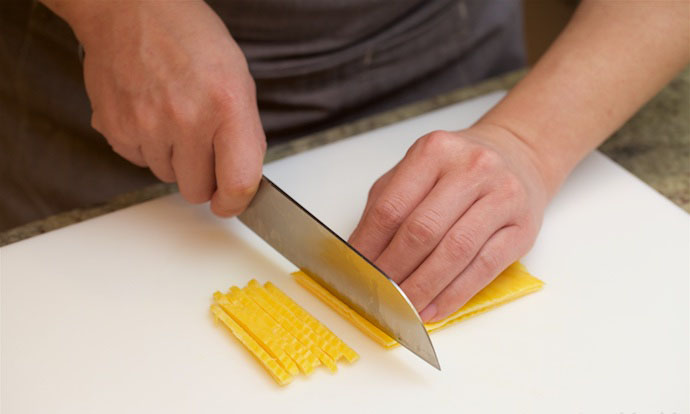 Cut the cooked eggs into three equal parts according to the width, stack them together and cut into 4 mm wide strips. 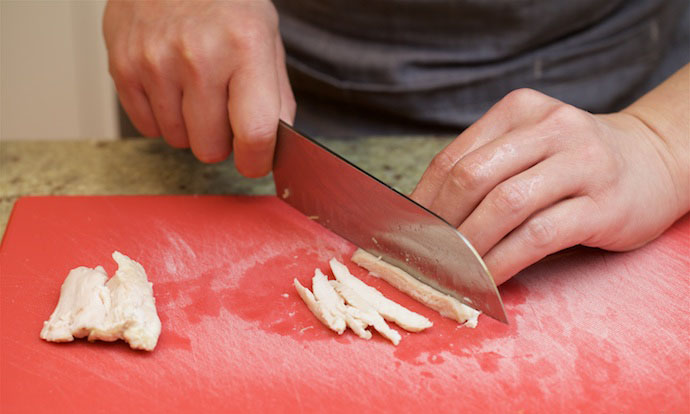 Slice the cooked chicken into strips. 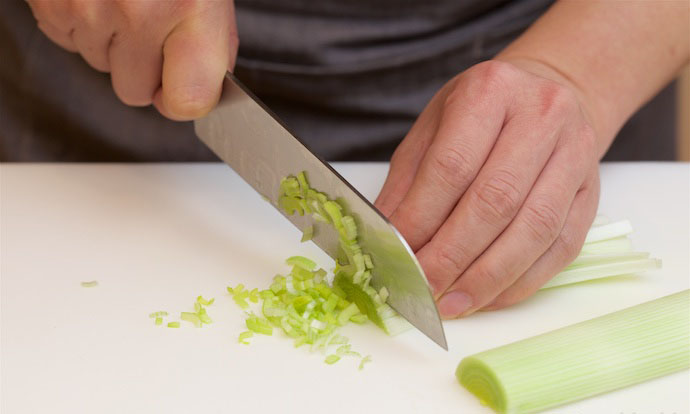 Now to the cold noodles sauces. Cold noodles are so delicious to eat mainly because of the sauces served with them. Chinese cold seasoning is mild and well balanced, and not as intensely flavored as cooked dishes. Hence the use of leek instead of green onions in this recipe.  Finely chop the white part of the leek. 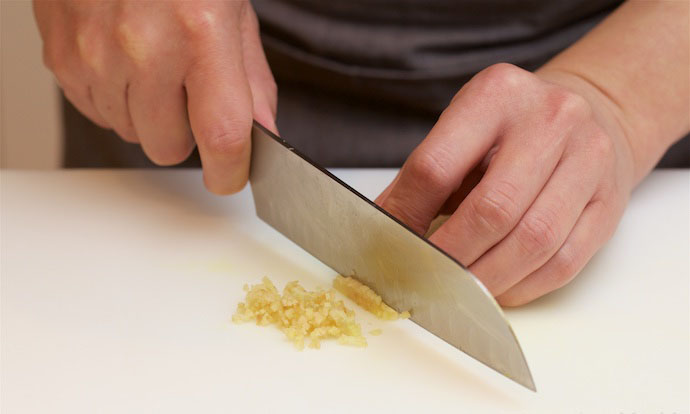 Slice the ginger thinly and then dice, or chop finely. 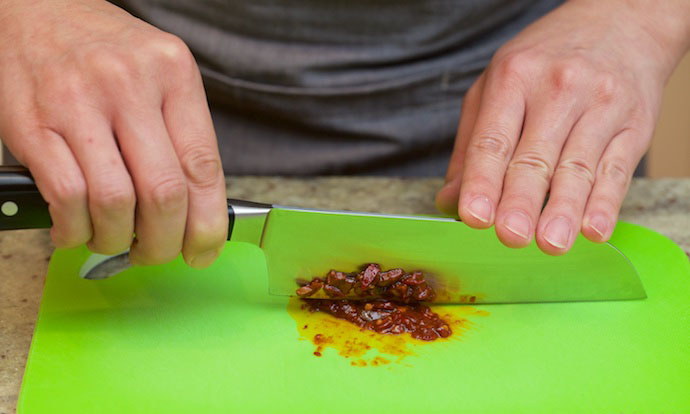 Chop the bean paste carefully. Japanese cuisine is very open to foreign ingredients, as long as they think that it can enhance the flavor of the dishes, whether it is Western-style milk or soy sauce. 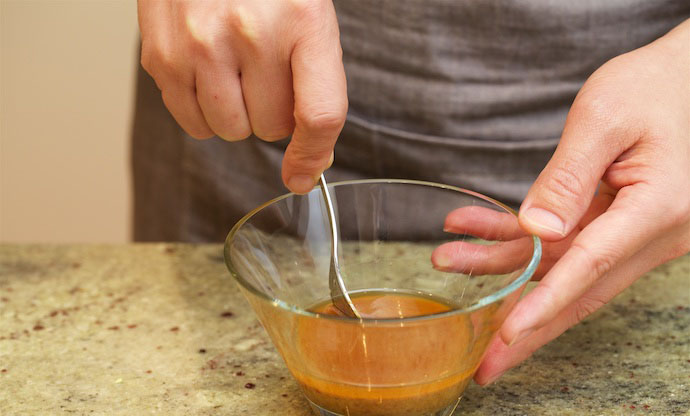 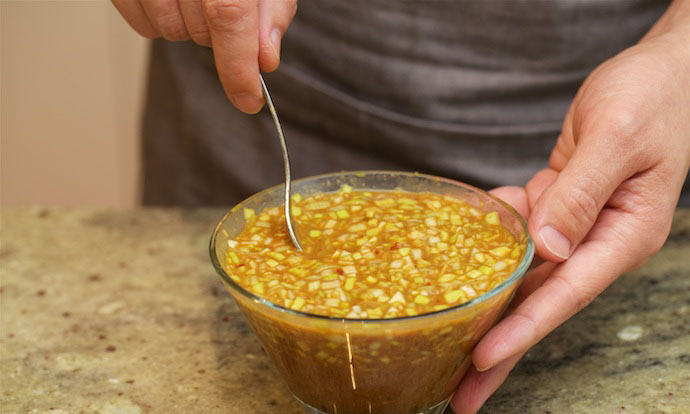 To this mixture, add the Japanese soy sauce, Japanese rice vinegar, chicken stock (from the stock formed from cooking the chicken), sugar, leek and minced garlic.  Stir evenly, and there you have the Chinese cold sauce. The sauce will settle after it has sat for a while, so will need to be stirred again just before use. 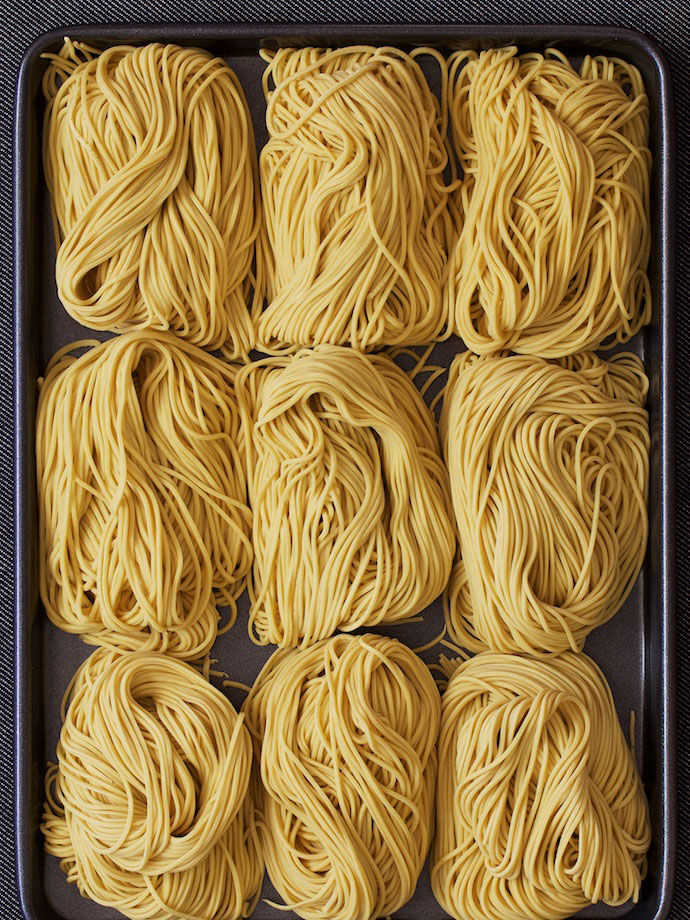 Now you have all the cold ingredients ready; it’s time to cook the noodles. 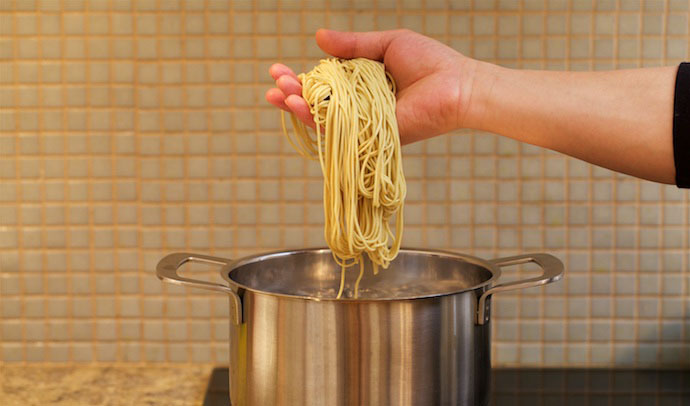 To a 20 cm soup pot, add 2 liters of water and bring to the boil. Add two teaspoons of salt and gently place the noodles into the pot. The cooking time of the noodles depends on their thickness. I have used 1.6 mm noodles which should be boiled for 1 minute 30 seconds, which is slightly longer than hot soup noodles, because they will be rinsed in cold water immediately after cooking. 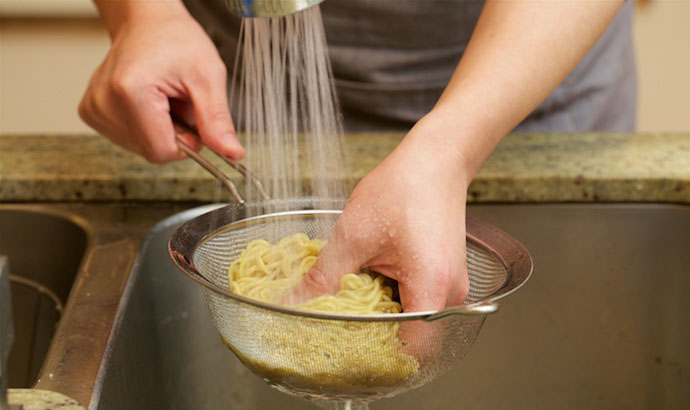 Wash the cooked noodles and gently rub with your hands to smooth the surface of the noodles. 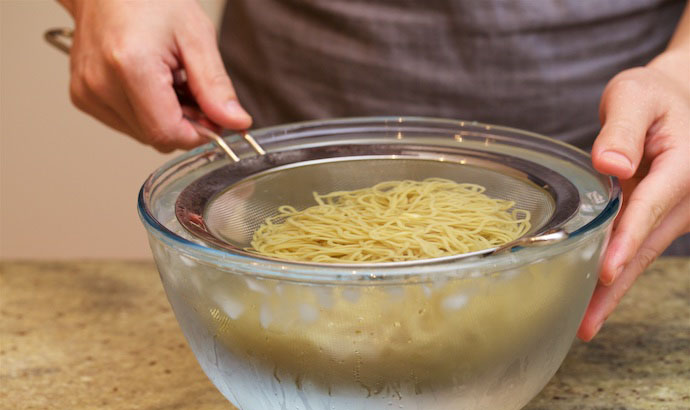 The noodle temperature would have dropped to room temperature, but you need to then quickly immersed them in ice water for 1 minute, to enhance the taste and flavor. Chinese cold noodles are indeed meant to be eaten “cold” not at room temperature, and that is why they are a favorite in summer, and not eaten much in winter. 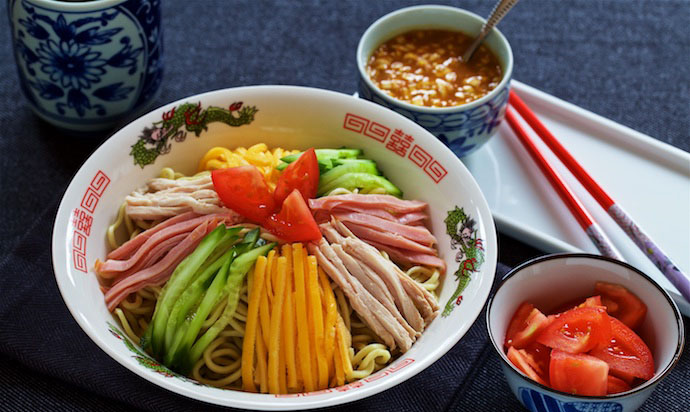 Gently strain and shake out excess water from the noodles, as this will dilute the flavor of the sauce. Place the dry noodles in a serving bowl and arrange the eggs, ham, chicken, cucumber around the edge and decorate with tomato in the center. Give the sauce a quick stir before serving.

Pour it over the meat and vegetables and stir through the noodles and your meal of Chinese cold Noodles is ready! 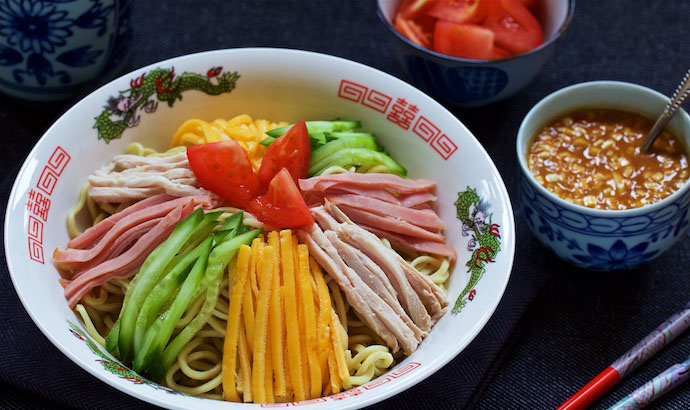