Xinjiang lamb, known throughout the country, is not only tasty and tender but is also milder in flavor than lamb found throughout the rest of China. Lamb kebabs are popular all year round and can be found sizzling away on street stall barbecues along the streets of Urumqi, costing as little as three dollars. It’s not just the price that has everyone eating them, it’s the rich cumin flavor that goes so perfectly with lamb. 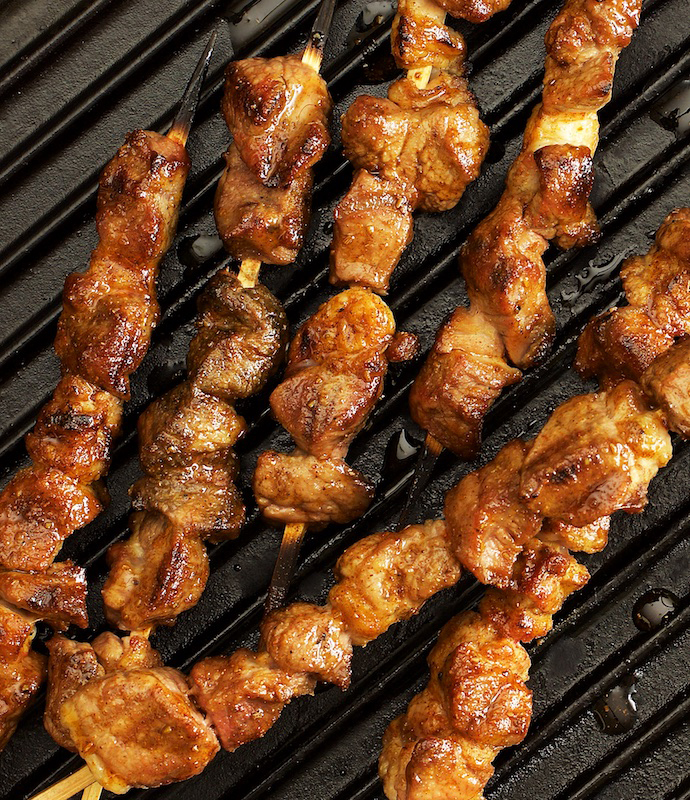 There is no direct succession of roast lamb in Xinjiang from that of the Central Plains. In Xinjiang‘s native ethnic language, roasted lamb is called “Kavapu.” And, grilled meat (mainly roasted lamb) is called “Kebab” throughout Central Asia, South Asia and the eastern shore of the Mediterranean, which is probably attributed to the early Mongol Empire during the Western Expedition which helped to promote the regional culture, especially in the exchange of food. 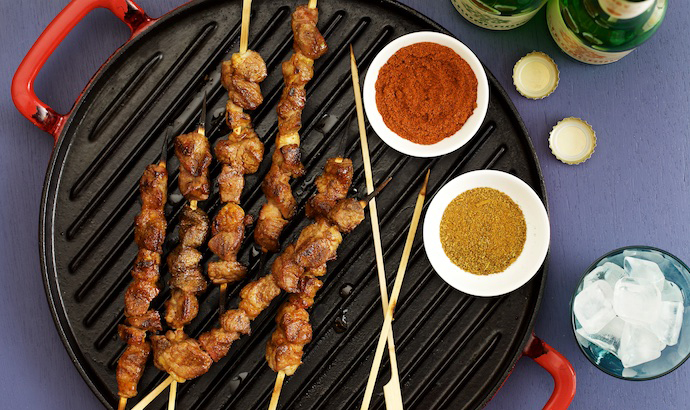 Many countries claim to have been the first to invent lamb on skewers. The Iranians say that the lamb on a skewer was invented early in their history by the Persian warriors. They cut their meat into small pieces and strung them onto their swords to roast over the campfire.

Not exactly high-tech, and it isn’t any wonder that other peoples thought up the same thing, so it cannot be determined where the idea of skewered meat originated. Evidence of cooking meat on skewers has been found from Ancient Greek pottery excavated more than 3600 years ago from the Mycenaean civilization (equivalent to the late Xia Dynasty in China), but no “Persian” name is mentioned! 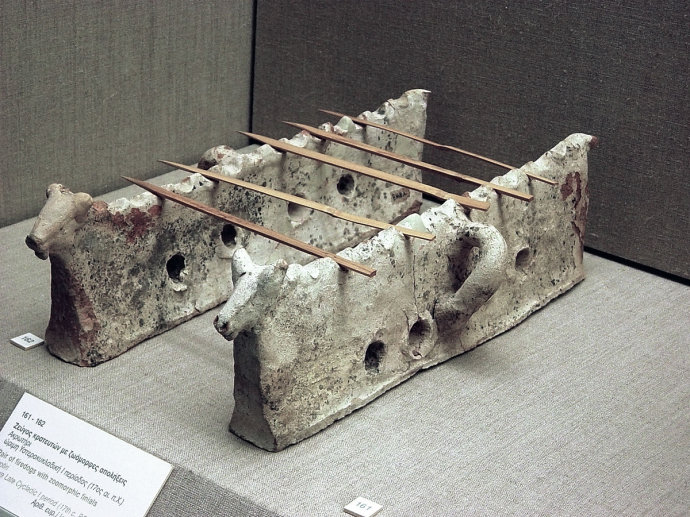 With the improvement of living conditions, it is no longer an elusive task to use a charcoal barbecue at home. It appears that most people like and will continue to eat Xinjiang lamb skewers. 3600 years on, even though man has gone to the moon, and conquered the Antarctic, barbecue equipment has not changed much.

Barbecue stoves are essentially a brazier, square or round, into which the coals are put, and a grid over the top for cooking the food on. Most have a lid to keep the heat in and vents to allow circulation of air. Whether it’s of metal or pottery construction, they all work essentially the same. 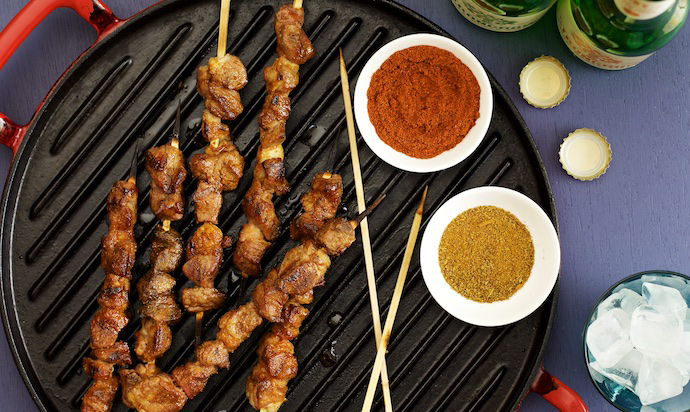 The key to successful kebab cooking at home is the coals, not the lamb. Coals are a tad tricky to light on their own, but thankfully there are fire starter cubes available to take your flame from lame to blazing in seconds. You can see the fire starters in the figure below, the white block surrounded by the coal.

Of course, you could also use some old newspapers, wood, or the like, but you might get more smoke than flame, and you don’t want to annoy the neighbors.

Place the fire starter on the bottom rack and arrange the charcoal around it in a circle, and then pile some on top. 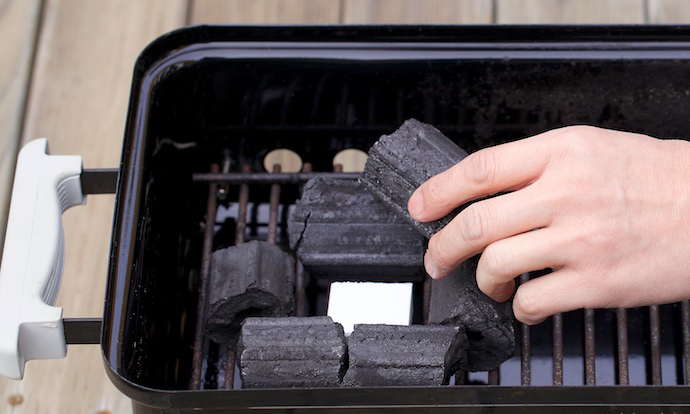 Light the fire starter with a match to ignite. 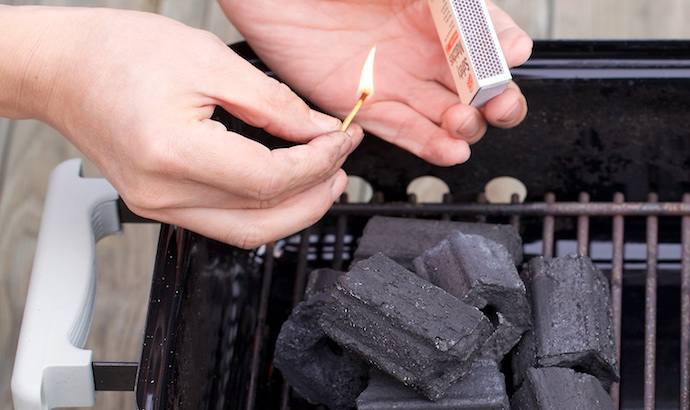 Then add a few pieces of charcoal above the flame. Charcoal takes at least 20 minutes to fully ignite, so be generous with the fire starter cubes. 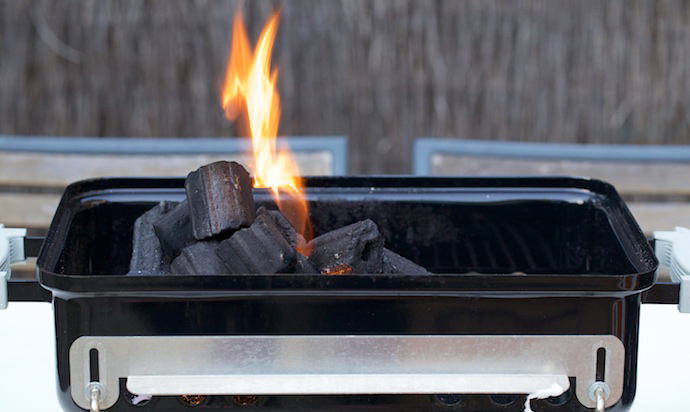 The open flame will gradually die down and the coals will begin to hold a glow. 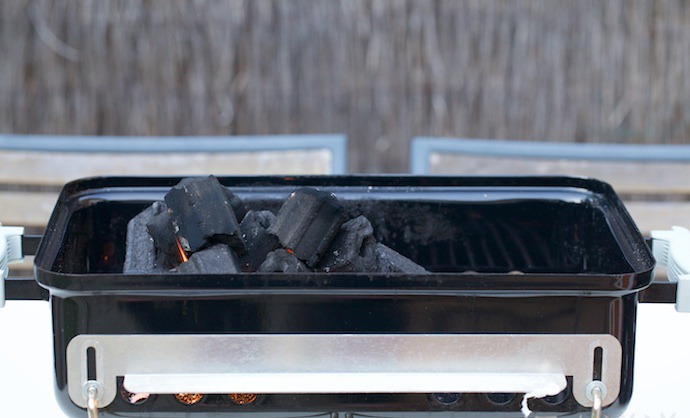 When part of the charcoal surface has turned gray, indicating it has been lit, then quickly put the barbecue lid on and open the upper and lower vents, so that sufficient heat and air is maintained to keep the charcoal alight. 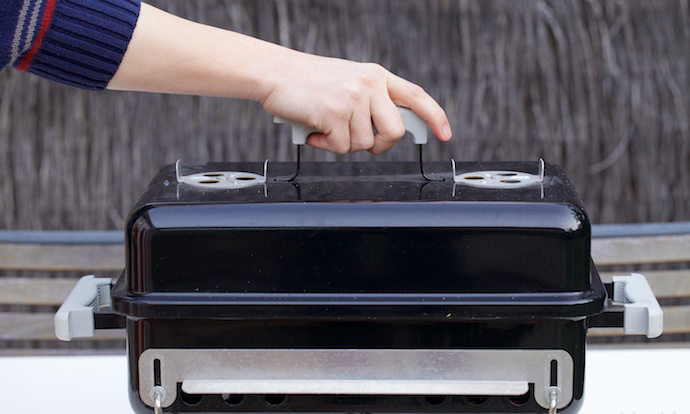 The coals are ready to cook on once all surfaces of the charcoal have turned gray. While you are waiting for this, prepare your lamb kebabs. 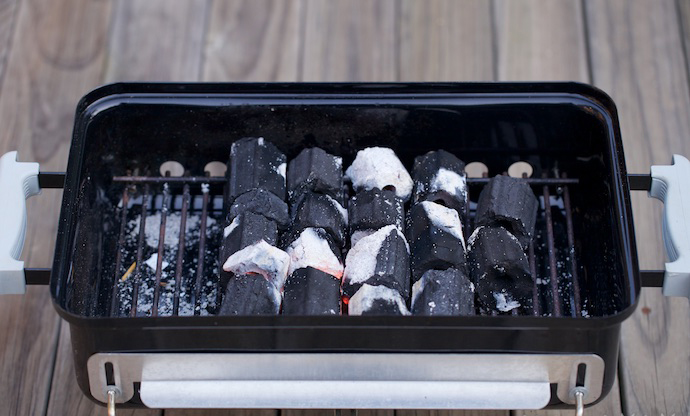 Many parts of the lamb are suitable for kebabs, except perhaps the lower leg, where the tendon is too tight and is really only used for slow cook stewing. Today, we are using forequarter chops, which are from the shoulders. These have moderate fat, and they are very reasonably priced. 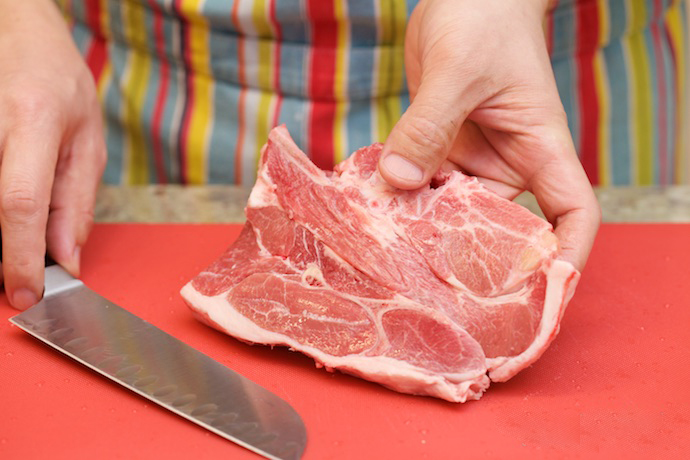 Cut the lamb into 1.5 cm square pieces, and then thread each piece onto bamboo skewers. Soak the bamboo skewers in advance for two hours to avoid them burning and, gulp! catching fire on the barbecue. 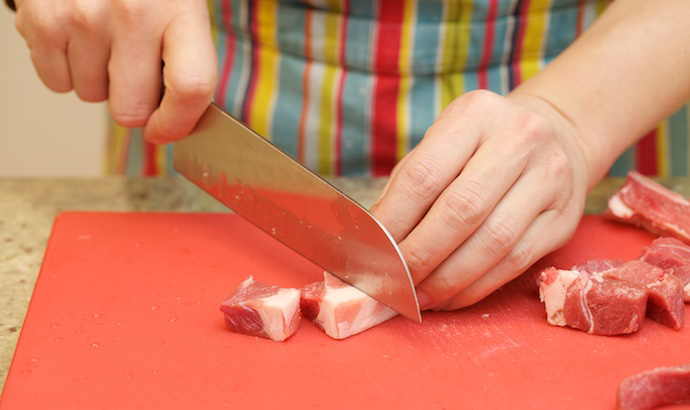 Try not to put too many fatty pieces on the skewers because the fat will drip onto the coals and blacken the meat. 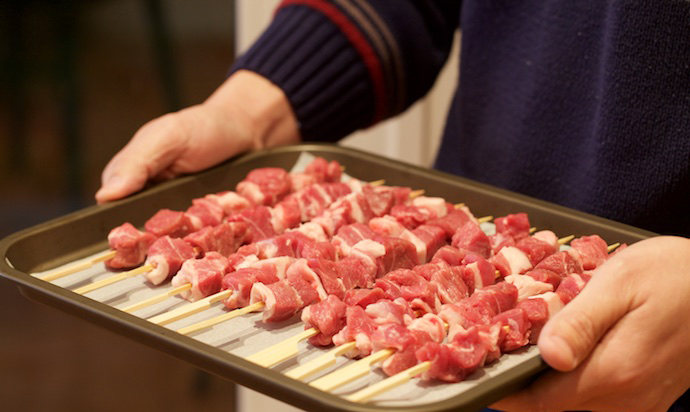 Kebabs can be enjoyed by all, whether it is the simple process of barbecuing or the eating, they are a feast of pleasure. In Australia, kitchens are still the domain of women, but when it comes to a barbecue, the men are in control. The women happily prepare the food and leave all the outdoor cooking to the men. I’ll leave it to you to decide which is the more enjoyable activity. 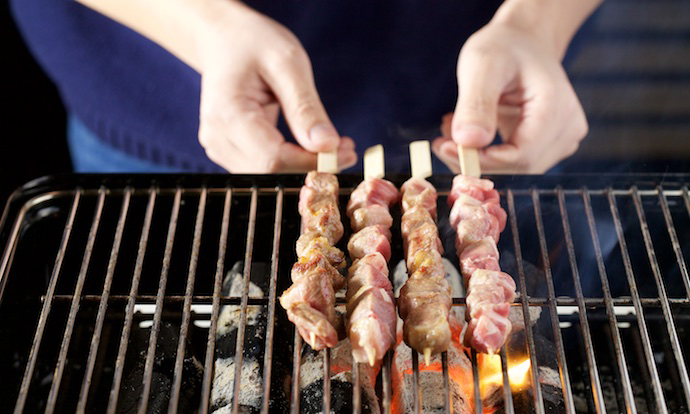 Turn the lamb skewers periodically to make sure they cook on all sides evenly.

And now for the flavoring (I know you’ve been wondering). Xinjiang flavored lamb skewers are very simple: salt, cumin powder, paprika. Nothing more. The seasonings need to wait until the lamb changes color. First, add the salt. 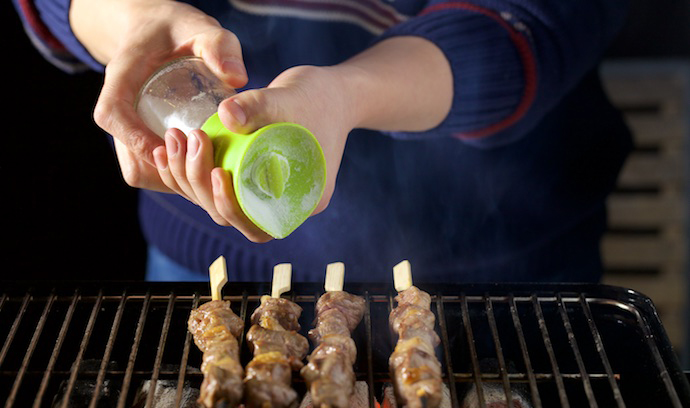 When grinding your own cumin, heat it first in a pan, let it cool, and then grind in a small food processor or spice grinder. If you are worried about the cumin powder falling onto the hot coals and smoking black smoke onto the skewers, take them off the barbecue and put them on a plate to sprinkle with cumin. 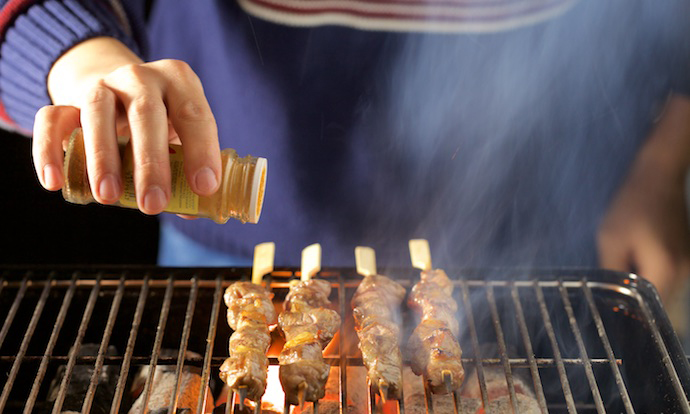 When the lamb is a beautiful golden yellow, it is ready to eat. Serve with yogurt and your favorite salad. 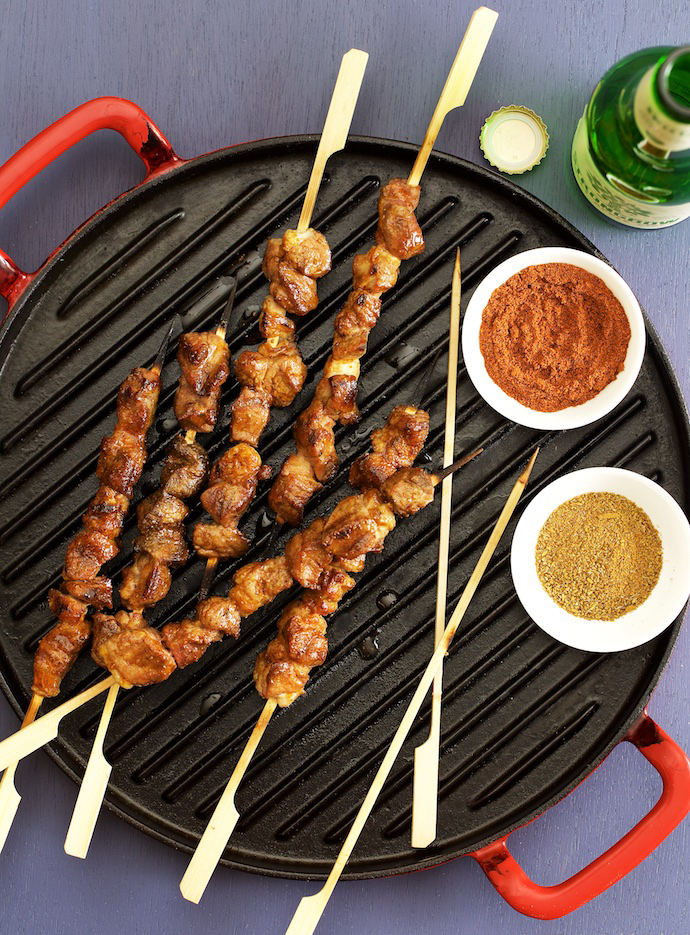