Exotic Lion’s Head Meatballs served in a dark sauce are representative of classic Huaiyang cuisine. Whether stewed or braised, the heavenly aroma and delicious taste of these meatballs will have your family begging for more!

Even more awe-inspiring is that there are no secret or expensive ingredients in Lion’s Head Meatballs (if you don’t like meatballs, check here), or any unusual spices; it is a simple, yet amazing dish anyone can make at home. 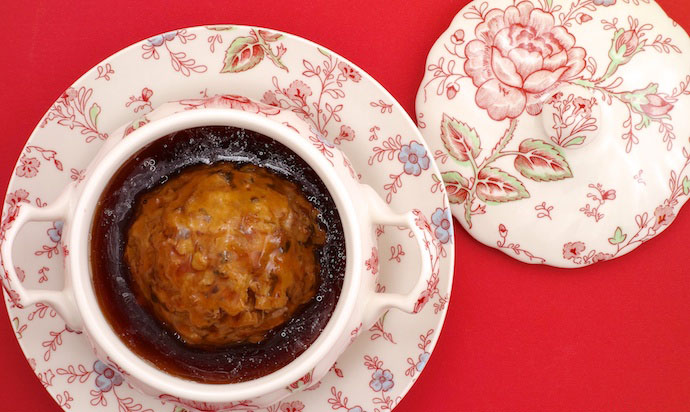 So, what’s in a name? Along with many others, I was intrigued as to why this dish is called ‘lion’s head.’ The lion we are familiar with today dwells on the African savannah, but over a thousand years ago, they were plentiful in India, Persia and surrounding areas.

Asian lions are now on the verge of extinction, only a few surviving in an animal park in India. 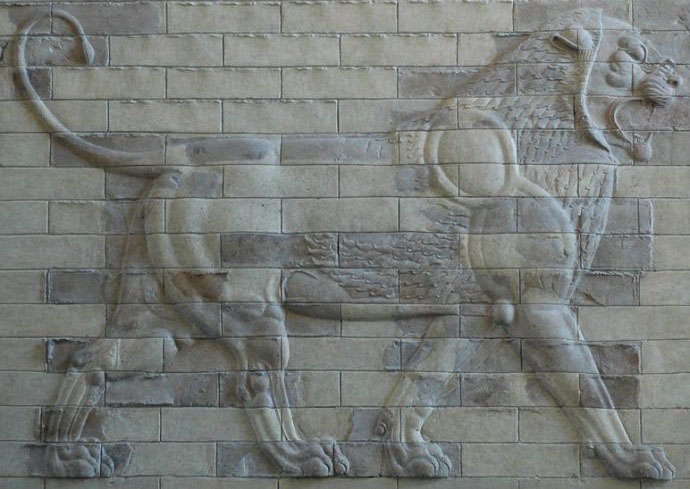 The Asian lion is portrayed realistically and profusely in ancient Persian architecture and art, however, in China, the situation is completely different. Rare in China, lions were more legendary, and so craftsmen and artists relied heavily on descriptions to reproduce their likeness.

During the Han Dynasty, Buddhism spread from India into China, along with many of India’s artwork portraying highly stylized images of lions. The lion enjoyed a high status in ancient Indian culture, with many gods taking on its image.

Legend has it that during the An Shi uprising in the Tang Dynasty, Wei Zhi, of noble birth, was appointed as governor of several provinces. He was on good terms with governor Gao Shi of Yangzhou.

While banqueting together one time, the family cook made a special dish for the guests called “sunflower meatballs.” The guests, wanting to flatter their host, called it “lion’s head” meatballs as it resembled a lion’s head surrounded by a great mane.

Here is what you will need to make Lion’s Head Meatballs:

The first step is to make the lion’s head.

The pork should be diced to get the best flavor from the meat. Cut the pork into 4-5 slices (freezing for 3 hours makes it easier to cut) and then dice into 0.5 cm cubes.

Keep the slices you are not dicing yet in the refrigerator until you are ready to cut those or they will thaw too quickly. 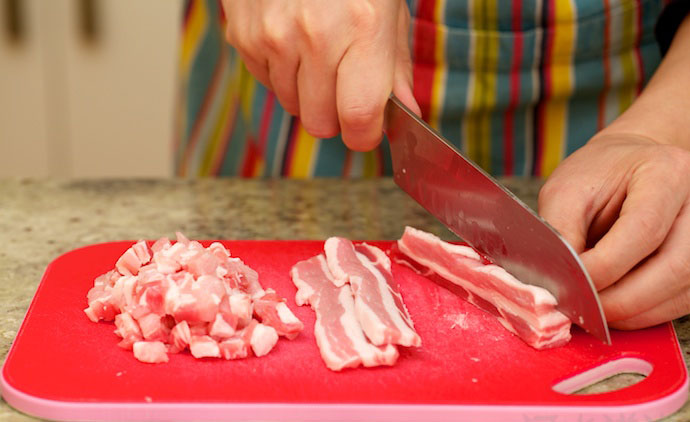 To be honest, dicing the meat yourself requires patience, but it is all part of the traditional process and will help you appreciate this ancient recipe! 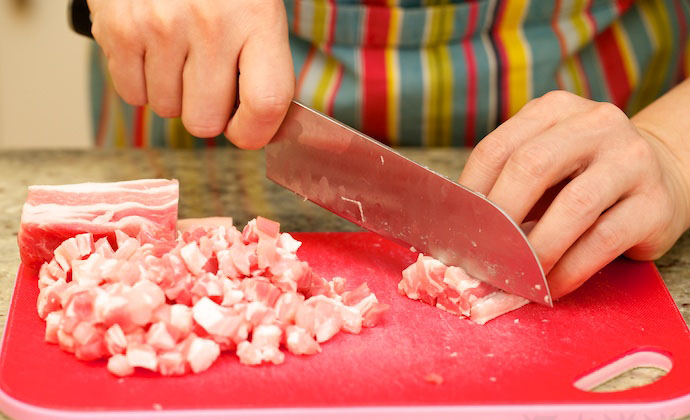 Once the pork is diced, chop it a few more times, but not too much – you do not want a minced consistency. This extra chopping just makes it easier to mix.

The consistency of the diced and chopped pork should still look quite coarse. 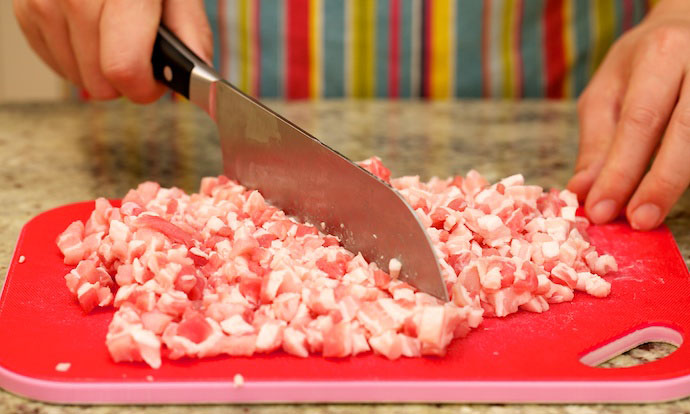 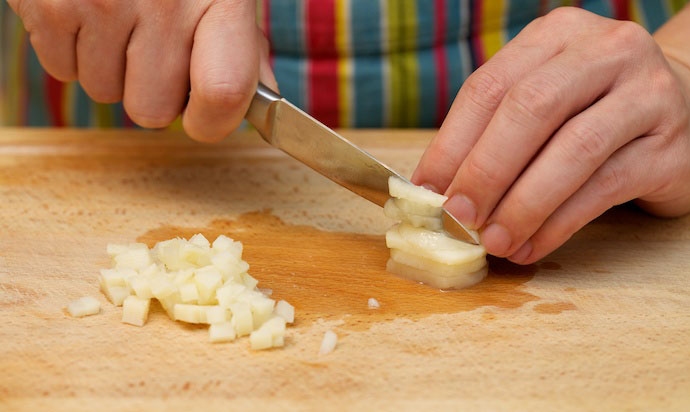 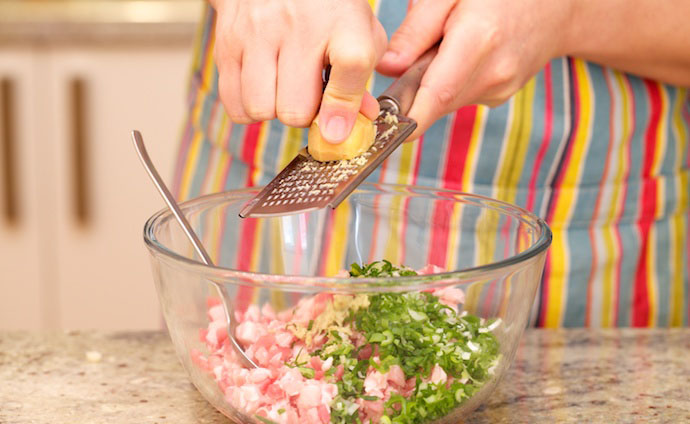 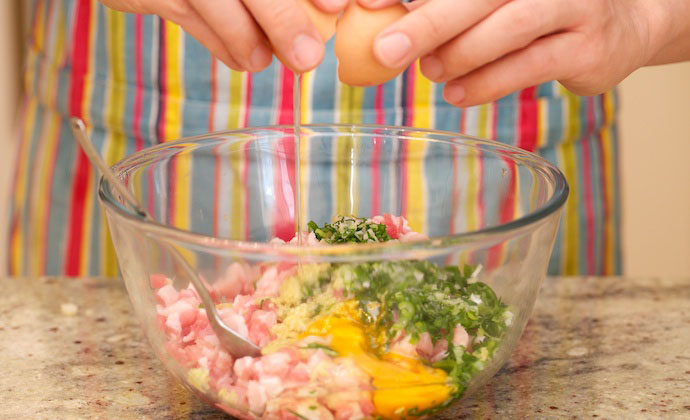 With a metal spoon or chopsticks mix rapidly in one direction. As you do so, you will gradually feel more resistance which means the mixture is strengthening. 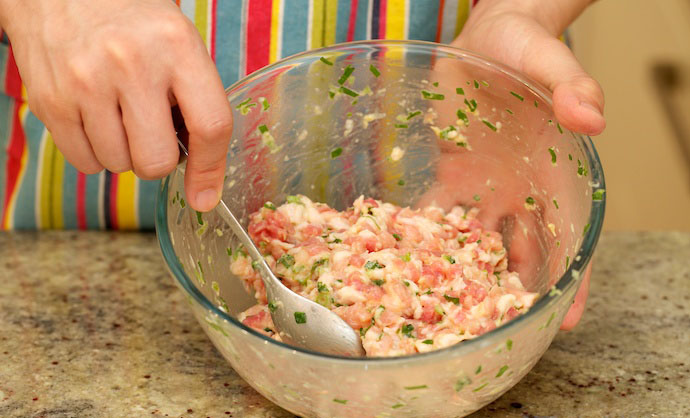 Once the ingredients are well combined, add the chopped water chestnuts and stir in. At this point, the mixture for the lion’s head is ready. 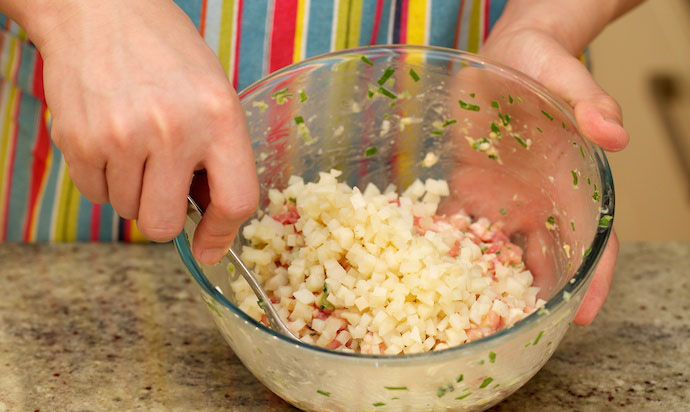 Divide it into four equal portions and place onto a plate in preparation for cooking. 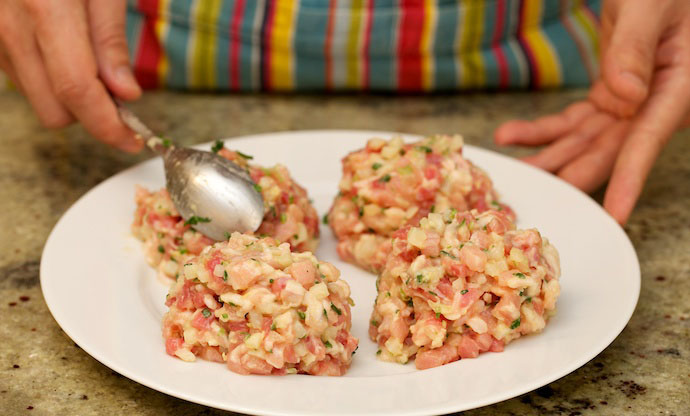 Grab one of the portions (If you are using gloves, dip them in the water), and toss and pat it from one hand to the other 60- 100 times to let the air out and shape it into a tight ball. 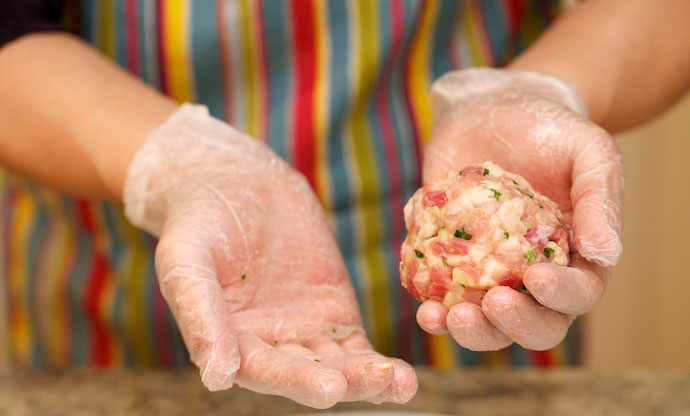 The second step is to fry the lion’s head. Take a small non-stick pan, and pour in enough vegetable oil to completely cover the meatballs, but far enough from the pot’s rim to not flow over when cooking. Heat the oil to 130 degrees Celsius. Here again, I strongly recommended that you buy a digital thermometer; they are not expensive and will save you a lot of guess work. 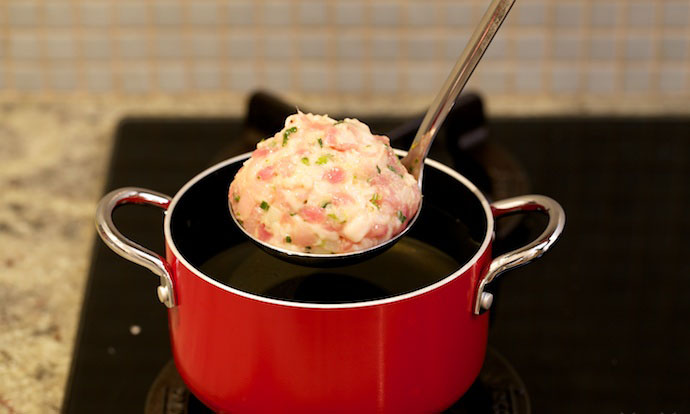 Toggle the lion’s head around gently every 1-2 minutes, to ensure it cooks evenly. When the meatball is golden, remove and wait for the oil to reach the desired temperature before frying the next one. Deep frying the lion’s head adds aroma that stewing does not achieve.

You can also shallow fry, which saves on gas and time by frying all four together, however, the lion’s heads will flatten, and you run the risk of them falling apart. The buoyancy of deep frying gives support to the lion’s head, ensuring it maintains its shape, and the heat is more uniform. 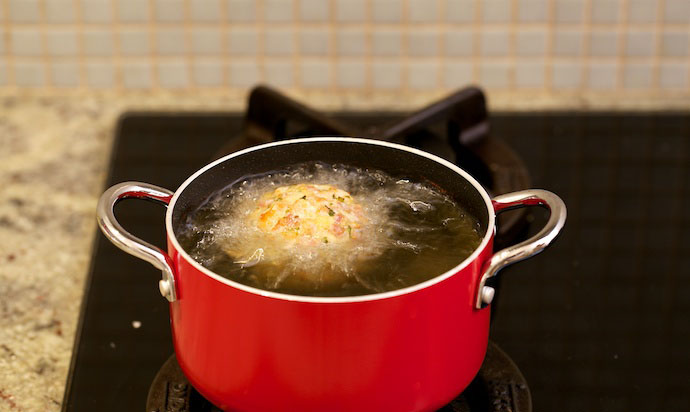 The third step is to braise the lion heads. Take a suitably sized deep pot that will fit the four lion heads, (about 18 or 20 cm diameter pot).

A casserole, stainless steel or cast-iron pot will do, so long as it has a good thick base to allow even cooking. Add both the soy sauces, oyster sauce, sugar, cooking wine, sliced ginger, green onion pieces and salt to the pan.

Place the lion heads at the bottom of the pot, and add enough hot water to almost cover. 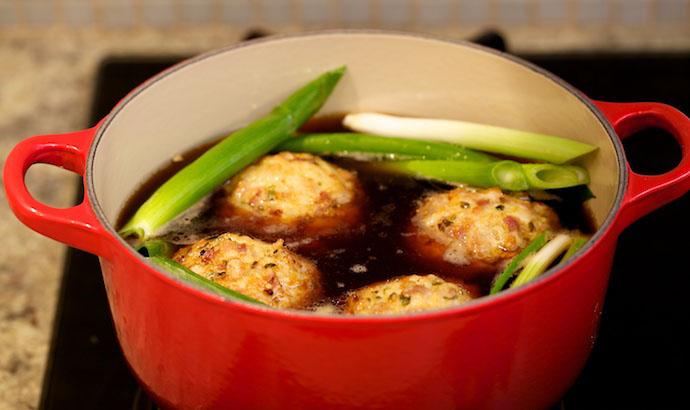 Cover the lion heads with three large Chinese cabbage leaves. Heat to the boil and then simmer on low for two and a half hours.

Two and a half hours later, remove the cabbage leaves, and serve the lion heads into a deep plate or bowl. Pour the sauce over and enjoy! 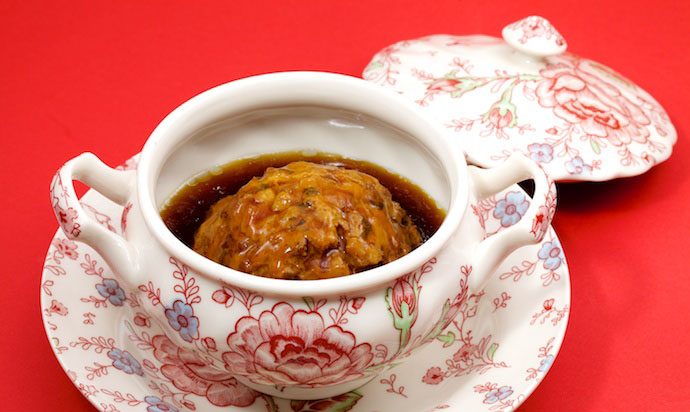 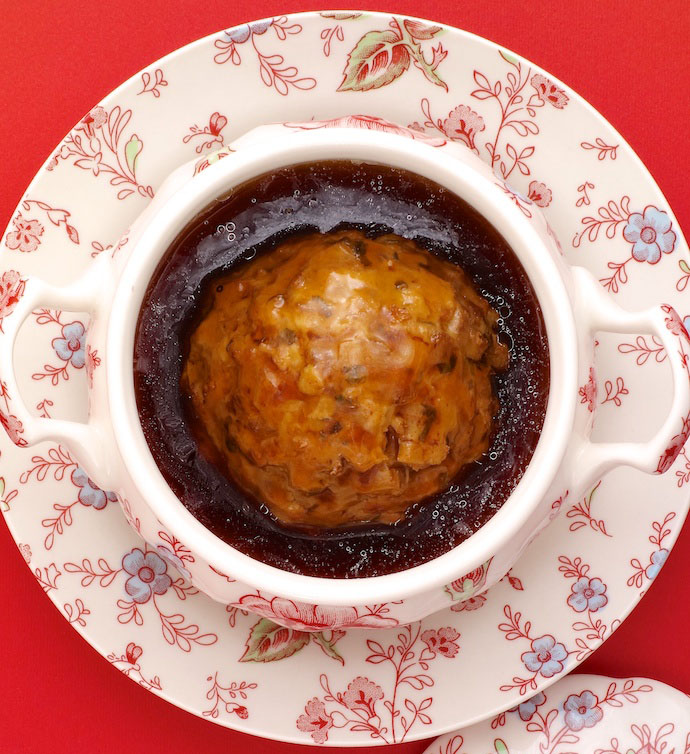