In Japan, curry is a real national food, from the classic curried rice to the ever popular curry Udon, and not to forget the incredible curry bread known all over the world. Statistics show that the vast majority of Japanese families eat a curry dish at least once a week. 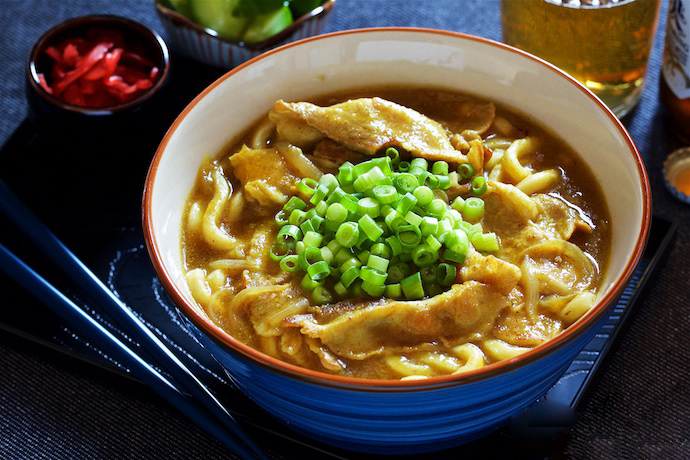 Like many Japanese dishes, curry is also an exotic dish. It is said that the president of the Imperial University of Tokyo, after visiting the United States, tasted a curry meal for the first time on the return ship. It was so strange to him that he scraped the curry from the rice and only ate the rice.

At the time of the Japanese Meiji Restoration period, the development of the Navy was a top priority, and to recruit soldiers, the naval officials offered them superior conditions. Free white rice was an offer many young men from poorer families could not refuse as they could send their pay home to their families, and so they rushed to the Tokyo Bay Yokosuka and joined the Imperial Navy.

However, the joy of free rice in the stomach did not last long, and many sailors began to suffer from beriberi, showing symptoms of apathy at first, and then losing the ability to walk, and finally death.

In 1883, the Japanese Navy carried out a training voyage, starting local and traveling all the way to New Zealand and South America, and finally, after arriving in Hawaii after nine months, of the 376 sailors on board, 169 arrived sick, and 25 were dead.

At that time one of the naval medical officials, Takagi, noticed a difference in living conditions between the naval officers, who were rarely sick, and the poorer, ordinary sailors, who were prone to the disease.

He immediately realized that the disease might be related to diet: officers enjoyed a variety of food, however, ordinary sailors only ate the white rice which was free, and could not afford to pay for other food, as they saved everything they could to send back to their families.

Takagi, a Naval doctor at the time, applied to the Meiji Emperor for funding to study the issue. On the following year’s training voyage, the Japanese navy improved the sailors’ diet providing them with meat, milk, and vegetables, resulting in only 16 sick of the 333 sailors, with no deaths.

Ten years later, the Dutch doctor Eijkman carried out a more in-depth study and determined the cause of beriberi was lack of vitamin B1, for which he subsequently won the 1929 Nobel Prize in medicine.

Although the cause was found, it was still a challenge to change the sailor’s general eating habits. You can lead a horse to water, but you can’t make it drink, so the saying goes. And so Japanese curry rice came into being in 1908 when the Japanese navy issued their “Navy Cooking Reference Book,” which recorded the curry rice recipe including ingredients such as vegetables, meat, flour, and butter, etc. as well as curry powder, of course, which they served with the rice.

The curry was adapted to Japanese taste, making their curries milder with a trace of sweetness as opposed to the traditional Indian or British curry which was more spicy.

The tradition continues today, and the Japanese Maritime Self-Defense Force is required to supply curry rice on all ships every Friday. The streets of Yokosuka are adorned with restaurant signs advertising “naval curry,” with some of them still using the naval recipe which originated in 1908.

Using curry powder in cooking was a new skill the Japanese people were a little reluctant to take up, and were more inclined to eat it at a restaurant or hotel.

In 1926, House Foods launched a powdered ready-to-eat curry, and in 1956 another company, S & B, launched their ready-to-eat curry. (Two years earlier than the invention of instant noodles!). And so was that finally the curry horn was sounded to the ordinary Japanese family giving them access to Japanese curry powder so they could make it at home.

In 2008, according to the data provided by the Japan Curry Production Association, Japan produced 5 billion portions of ready-to-eat curry blocks, equivalent to the consumption of at least 3-4 times a month for every person.

In addition to rice, udon (thick Japanese wheat flour noodles) also pair well with curry, which is what I use in today’s recipe. I also show you how to use a ‘curry block’ to flavor the dish. Look forward to a treat for your taste buds! 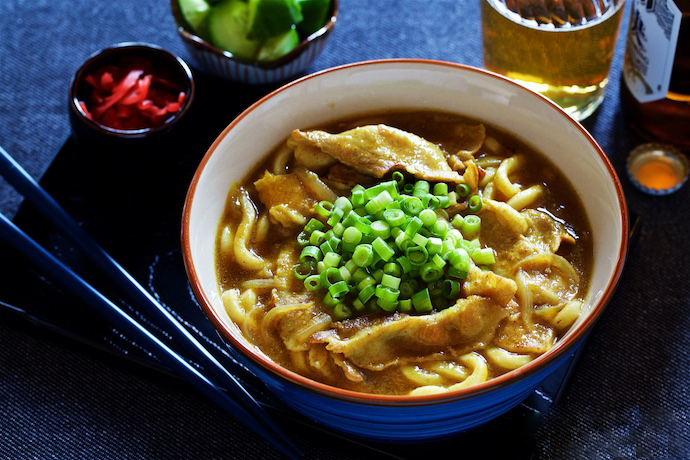 Japanese-style fish stock, or Dashi, is made from kelp and bonito flakes, adds a salty flavor to dishes and really should not be left out or replaced. It is the secret ingredient giving authenticity to many Japanese dishes. If you do not want to make your own, you can buy ready-made Japanese fish stock, which is a red color.

Slice the pork thinly. You will need a good sharp knife for this.

If you can’t slice the meat to your satisfaction, you could buy it already sliced, or ask your butcher to do it for you. 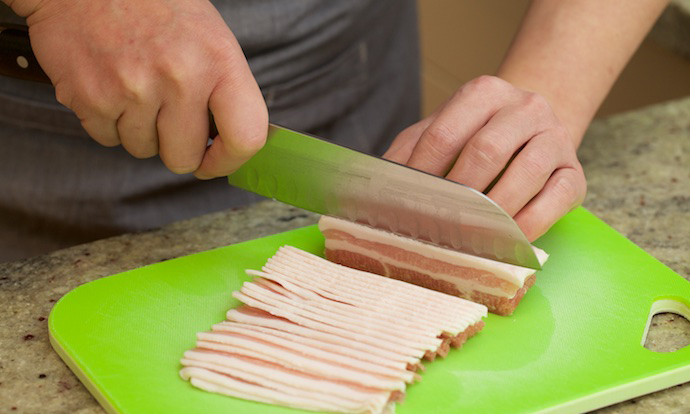 Cut the onion into 5mm wide slices vertically. The Japanese changed to this method of slicing onions, rather than the Western method of either dicing or cutting across the grain, as it saves  time. That’s Japanese efficiency for you! 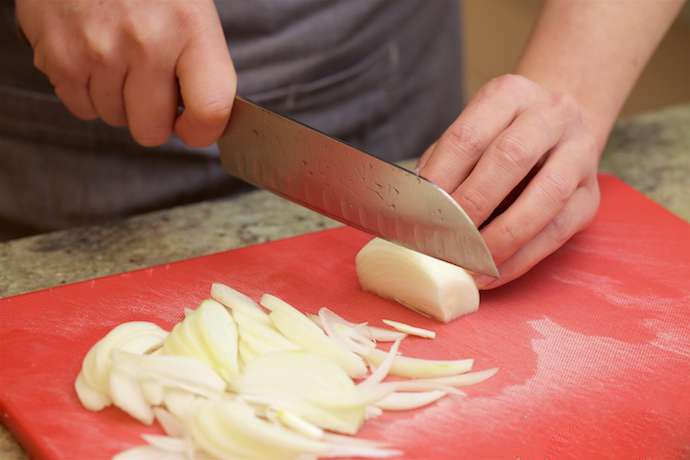 Chop up the curry block so it will dissolve more easily. 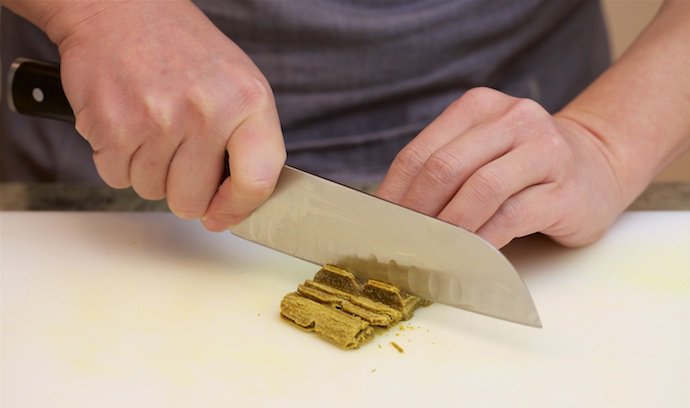 Preheat a 24cm flat non-stick pan for 2 minutes and add the grape seed oil and pork slices. Stir quickly with chopsticks until all the meat changes to a lighter colour. 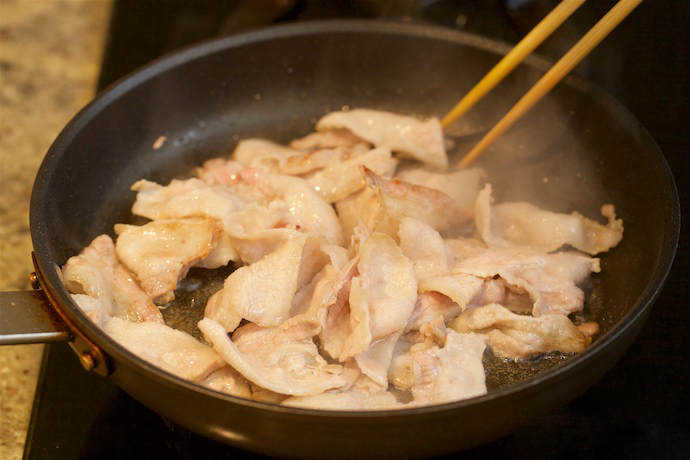 Toss in the sliced onion and stir for 1 minute. 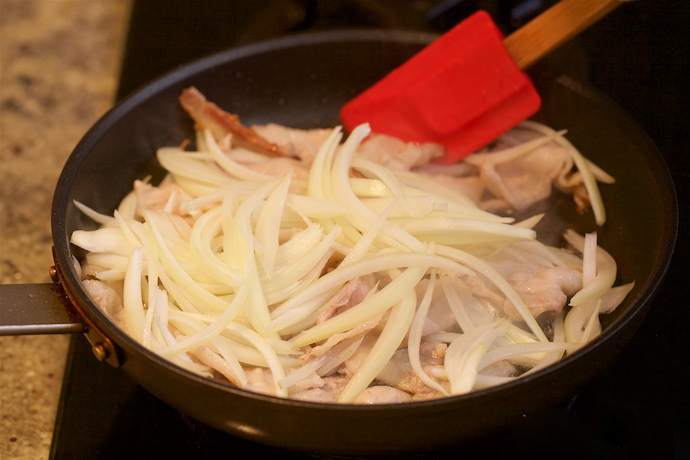 Add the fish stock, which is the basis to build the other ingredients on for a full flavored curry.

Add the mirin and Japanese soy sauce, which both season and colour the dish.

Boil the soup, and then turn the hotplate to low and continue simmering for 10 minutes, until the onion becomes soft. This step is very important so the sweetness of the onion is fully released into the dish. 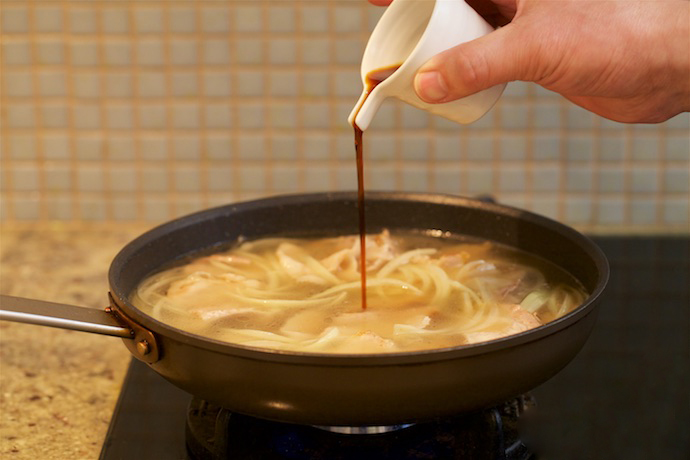 Add the chopped curry pieces to the pot and gently stir to help the curry dissolve and thicken the soup. 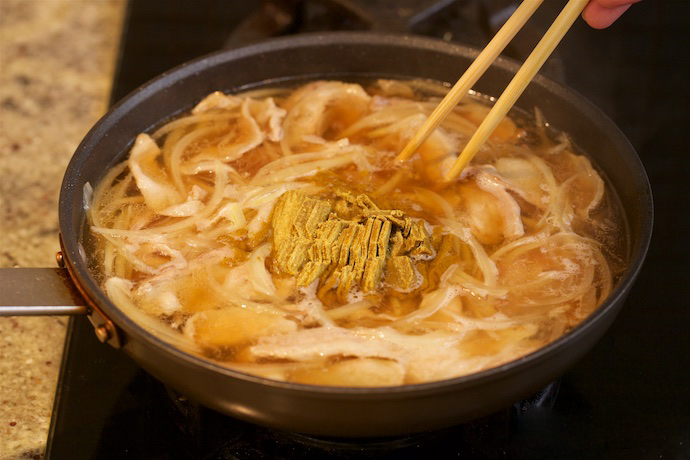 Put two portions of ready-made udon into the pot and heat for 3 minutes, gently separating the noodles with chopsticks. Sprinkle the chopped green onions on top and serve immediately.

If you do not want to eat instant noodles, you can cook fresh or dried noodles in another pot and then add them to the curry.  Strain them well so as not to add any water to the dish, thereby diluting the flavor. Heat for about a minute before serving. 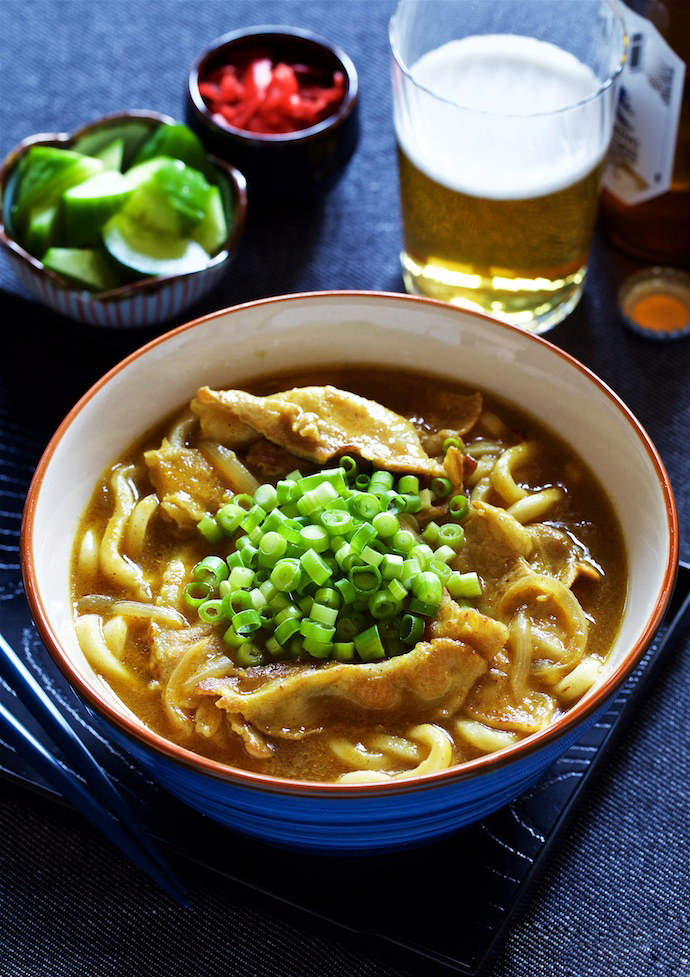