Whether you are new to working with raw chicken, or deep-frying: follow this easy recipe to learn to cook like the greats with an iconic dish from the American South!

Deep Fried chicken one of the most iconic foods in the south of the United States.

Its popularity has been matched as with Chinese tomato eggs.

It’s so well known, that some people can even make fried chicken with their eyes closed!

The American blind singer Ray Charles was born in Georgia, where he made great fried chicken.

Quincy Jones, a famous music producer, said that Ray’s fried chicken was the best thing he had ever eaten. Ray Charles learned his recipe for making fried chicken from his mother. 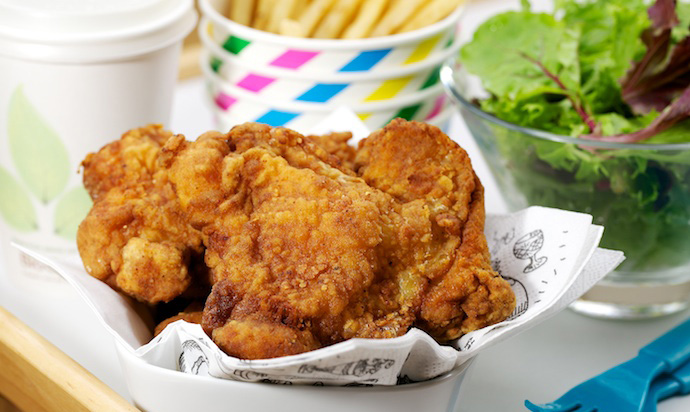 During this generation, there was also the legendary man Harland “The Colonel” Sanders, an iconic figure in the South.

Sanders was born in 1890, and when he was 7 years old, his father died from a fever, so his mother had to work full-time in order to support the family, and he learned how to cook for his family.

When he was 13 years old, Sanders had moved to Indiana to paint carriages. Living this far from home, he began the most colorful career in his personal life.

He worked hard, went to Cuba as a soldier, worked as a boilerman on a train, sold insurance, and worked as a correspondence teacher, as well as Lawyer of the Year.

In the 1930s, he settled down and started operating a gas station under the jurisdiction of the Shell company in Kentucky. In addition to fueling trucks, Sanders also cooked his fried chicken for drivers.

He served fried chicken, biscuits, and country ham, and steaks. His so-called “restaurant” had only one table: Sanders’ own dining table.

For people who are content with this type of life, they would have worked like this until they retire; but Sanders was not one of these people.

The love of fried chicken made him constantly explore new cooking techniques. In the 1930s, the pressure cooker had just been invented, which people used to quickly cook vegetables.

Sanders had great success in re-purposing the pressure cooker to make his fried chicken, and therefore the cooking time was greatly shortened, and so he was able to make many more meals.

As a result, he gradually expanded the small restaurant at the gas station into a chain-operated fast-food empire, which is now known today as KFC. In 1962, Sanders’ health was beginning to deteriorate, and he began to be mainly used as an image, or spokesperson, for KFC to appear before the public.

In 1980, Sanders died of acute leukemia, and KFC began to employ actors to continue his this iconic form.

One of KFC’s business gimmicks is the secret recipe: the “11 herbs and spices”.

It is said that Colonel Sanders had never changed it after it was established in the 1940s. Of course, there are also people who do not believe this. Someone took KFC’s fried chicken to the lab for testing.

The ingredients that are detected are flour, salt, black pepper, and a secret ingredient that would surprise you is MSG. From my point of view, the influence of the recipe of the spices’ influence on the flavor of fried chicken is very limited. 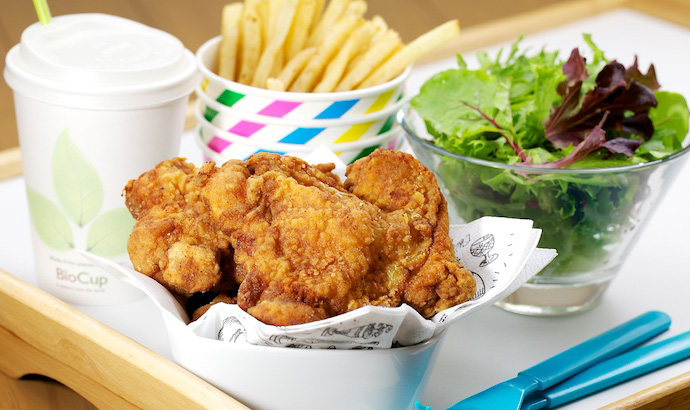 The quality of the chicken itself, the control of oil temperature, and the length of cooking time seem to be most important.

In this recipe, we are going to talk about how to make crisp, tender, and juicy American-style fried chicken. 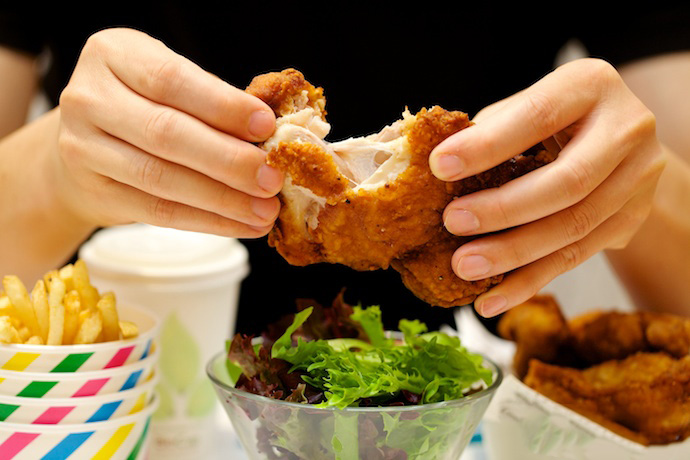 We can’t do that without chicken, so let’s start there!

The choice of chicken.

As everyone probably knows, different parts of the chicken have a different flavor, and each part is suitable for particular dishes.

Personally, I think that the chicken thigh is the most suitable piece for making fried chicken, and the chicken breast is the least.

The chicken thighs bought usually with the bone still in, I prefer to remove it. This will shorten the cooking time and better preserve the moisture inside the chicken.

The most chicken you get at the grocery store is mass-produced, so it is better to trim the large amounts of fat beforehand, otherwise the fried chicken will be very greasy. 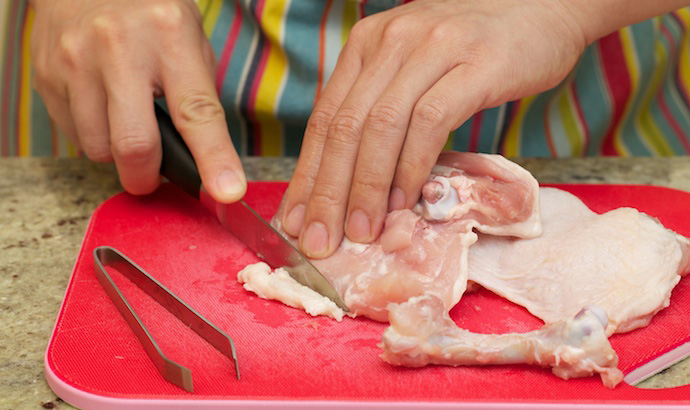 After the bones have been removed and the fat trimmed from your chicken thigh, it should look like this: 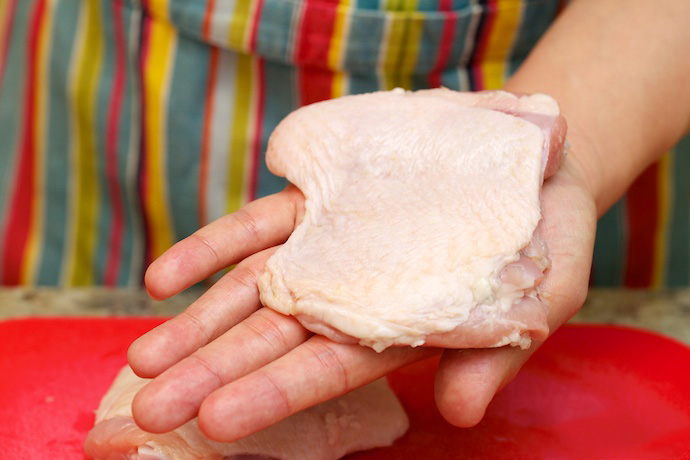 Now it is time to start getting the chicken ready for frying, and then the actual frying process itself.

Step 1: Brine the chicken. KFC’s practice is to put a batch of chicken in a sealed plastic bag and pour in brine and let rest.
Such industrial plastic bags are not easy to find, so at home you can use tupperware.

The salt water formula is 14 grams of salt per 250 grams of water and must be stirred thoroughly before use to ensure that all of the salt has dissolved.

Put the chicken into the sealed box first, then add the salt water until it is submerged. Cover the lid, shake lightly it a few times to ensure all of the chicken has been covered by salt water.

Then, put it in the refrigerator and let sit for 2 hours. Take the box every 30 minutes and shake to make sure that the chicken is evenly coated and tasty. 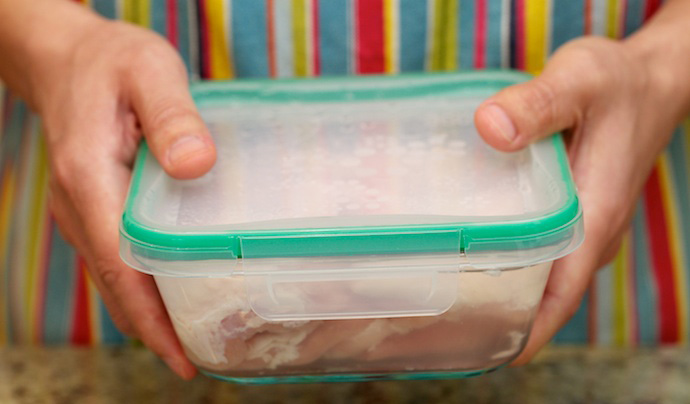 Step 2: While waiting for the chicken, we now prepare the fried chicken flour as follows (for 6 chicken thighs): 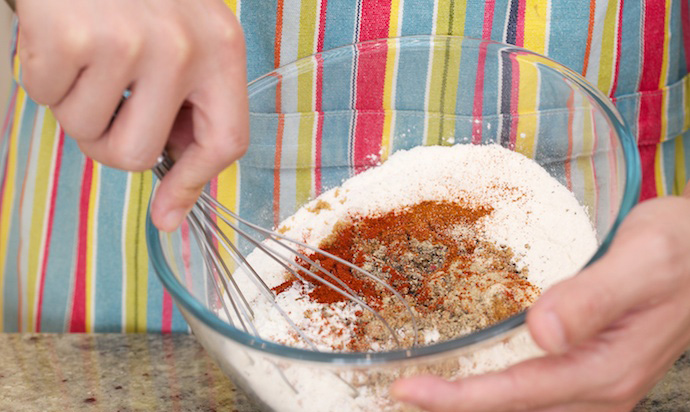 Step 3: Put the above ingredients into a large bowl and mix well. If brown sugar is used, it must be done by hand to break up the brown sugar.

The chicken drips off excess water and put it in the flour. Press the chicken into the flour, flip it over, and press it in again. You cannot over-do this step, as the entire chicken thigh must be evenly coated with flour. 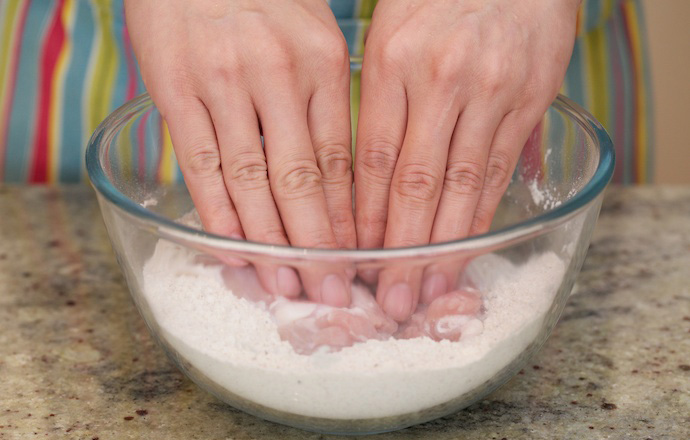 Step 5: The coated chicken is placed on a plate and allowed to set for 20 minutes. The moisture inside the chicken legs will seep out, allowing the surface to become moist and create the conditions for a “Double Dip”, which is used in the KFC.

If there is not enough moisture, you can quickly dip in some water, being careful not to wash off the flour, and then coat the chicken again. 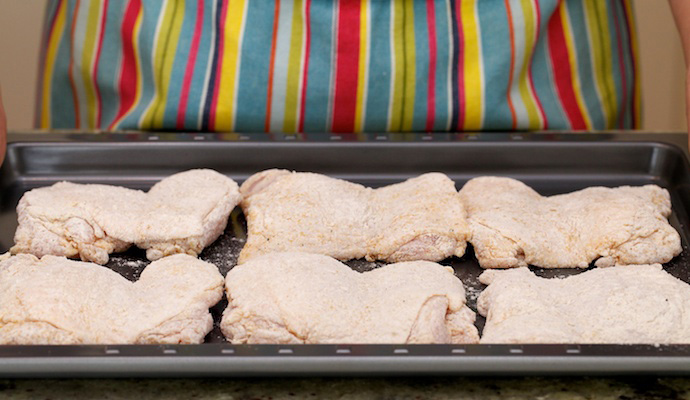 Step 6: Prepare your pot for deep frying. Add oil into your pot and begin to heat. Here is an 18 cm pot with 600 grams of oil added. The should reach 190 degrees Celsius, which is also the temperature used by the KFC. Here, I recommend that everyone buy an electronic kitchen thermometer, as it is the most accurate. 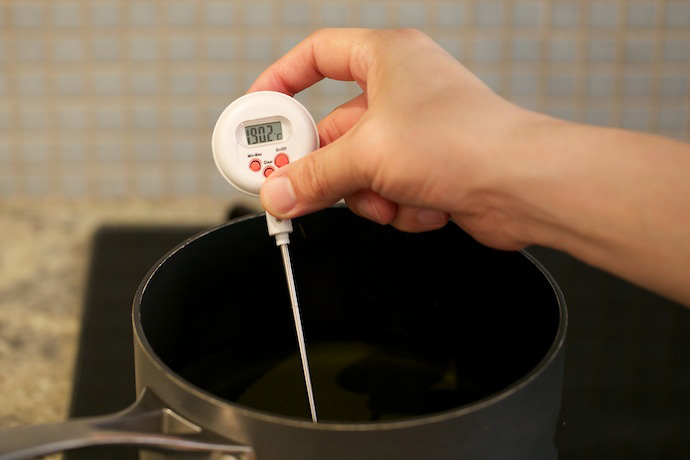 Step 7: Make sure every chicken thigh is still evenly coated after picking up, and give it a little shake to rid it of any excess flour, as it will dirty your oil faster. Then VERY GENTLY place the chicken into the oil.

If you do not feel confident doing this, you can use tongs to gently lower it into the pan. If the oil temperature is accurate, you should start to see the bubbling and hear the cracking of the oil, which is quite a satisfying sound.

During the frying process, it is necessary to constantly monitor the oil temperature to adjust the stovetop accordingly to ensure that the temperature is maintained at 190 degrees Celsius.

The frying process for the chick thigh described in this article takes 14 minutes. The fried chicken legs are then placed on a plate with a paper towel and cooled for 3-5 minutes. As tempting as it is, do not stuff the freshly fried chicken into your mouth! It can cause serious burns. 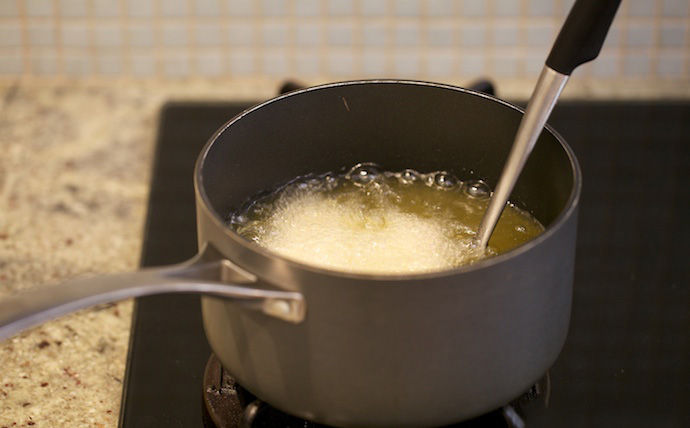 1) Each chicken piece needs to be “double-dipped” before it is fried.

2) Be sure to wait until the oil temperature rises to 190 degrees Celsius before putting the chicken into it.

3) If there is residue in the pan, be sure to remove it as soon as possible, otherwise the oil will become darker and darker.

4) PAY VERY CLOSE ATTENTION. Hot oil is not a joke. If any water gets into the oil, it will start to violently pop and can cause a grease fire, as well as if it is spilled. You should read how to handle a grease fire online if this is your first time deep-frying.

If the pot is relatively small and only one piece can be fried at a time, you can preheat the oven to 70 degrees Celsius, half-open the oven door, and put the fried chicken on oven rack, this is also the practice inside the KFC.

The chicken is best enjoyed after about 5 minutes of cooling, as it will be the most crunchy, warm, and moist!

This fried chicken recipe is guaranteed to keep people coming back for more and more of this succulent, crispy, savory chicken, that will taste just as good as “The Colonel’s!”