The king of fried noodles in soy sauce (Hong Kong style chow mein) is a well-known Hong Kong-style snack. In Guangzhou, it is a favorite dish to eat alongside a cup of morning tea and is popular for breakfast. 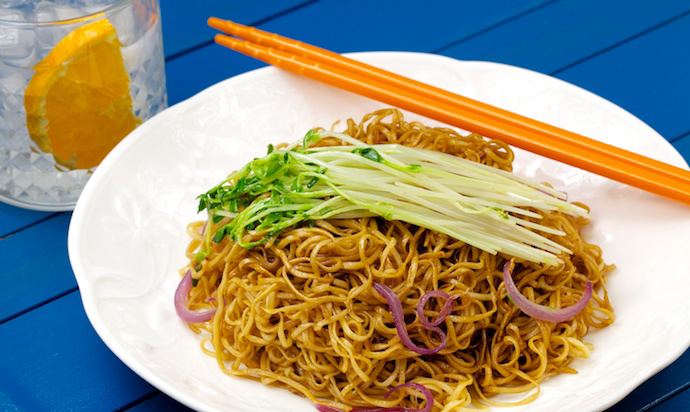 As its name implies, the main flavoring of stir-fried noodles is soy sauce. Although soy sauce is not unique to Cantonese cuisine, the chefs in Guangdong and Hong Kong did indeed make the soy sauce taste superb.  They not only cooked all kinds of delicious Chinese dishes, but they even introduced it into Western cuisine. It is no wonder to discover that Western food has also now taken on the soy sauce flavorings once popular and traditionally rooted in Hong Kong.

Why do they say it is the “king of soy sauce?” It is because a top-quality soy sauce is used, prepared with a variety of seasonings. Each Cantonese chef has their own classic recipe for cooking a series of Cantonese delicacies, such as fried noodles with pigeon or chicken, etc.

Making the noodles is always the first step in making this dish. The quality of store-bought noodles is often not very good, and the result is usually unsatisfactory. I have drawn a lot from my experience in making alkaline noodles to making the whole egg noodles in today’s recipe. Fresh homemade noodles taste much better than bought noodles, and you do not have to worry about any bizarre ingredients.

Let’s talk about the dough for the stir-fried noodles, beginning with the flour.

First, we’ll make whole egg noodles (two serves). Take a bowl and weigh it on the scales. Clear the weight (we need to find the tare weight) and break two eggs into the bowl. You are weighing the egg whites and yolks (without the shell). The amount of flour to be used in this recipe is double this weight of the eggs used. For example, if the liquid of the eggs weighs 105g, then you will need 210g flour. 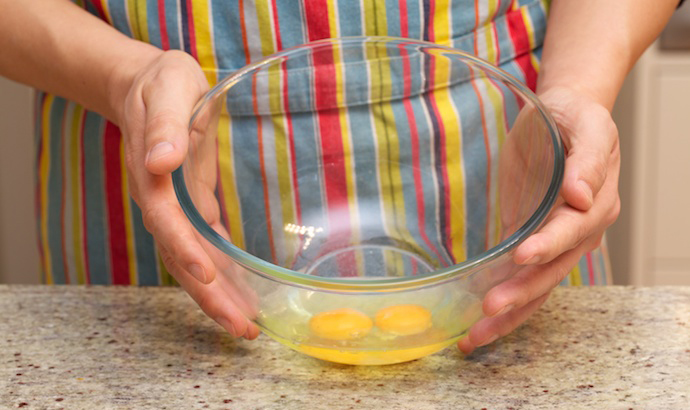 Add the required amount of high-gluten flour (bread flour) into the bowl and stir with chopsticks. 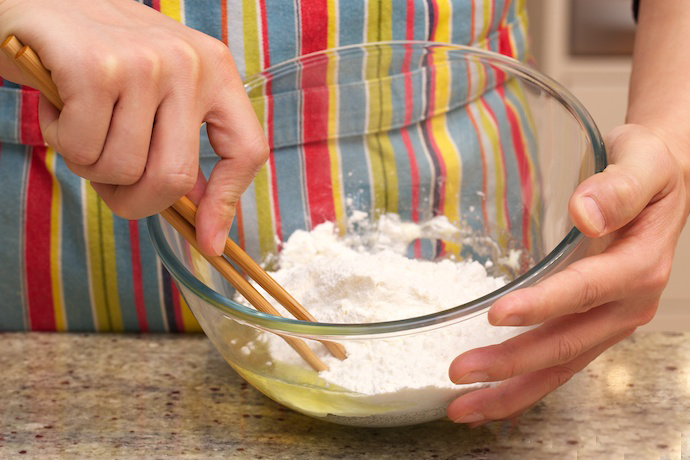 Tip the egg and flour mixture out onto the countertop, as shown in the following picture. You might think it is too dry and doubt whether it can be made into dough, but don’t worry. 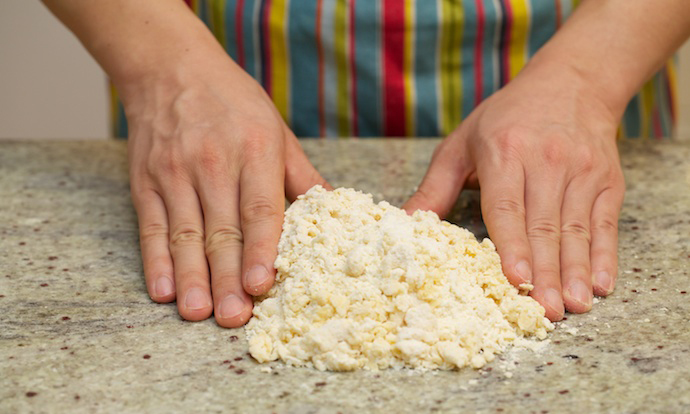 After you knead the mixture together for about three to five minutes, it forms a hard and slightly crumbly dough like the one shown below. 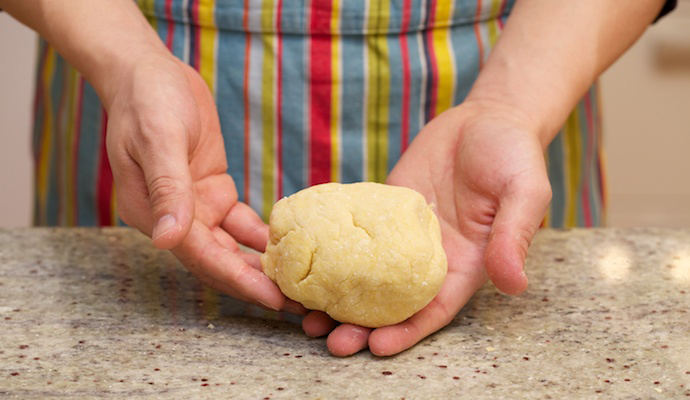 Do not knead the dough too much, as the pasta machine will do the work of smoothing the dough, and making it more flexible.

First, you must adjust the settings for the thickness of the dough to the maximum. Cut the dough in half and wrap one half in cling wrap and set aside. Flatten the other half by hand and feed the piece through the pasta machine. Fold it and pass it through again. By repeatedly folding and flattening it with the machine, the dough quickly becomes softer and smoother. 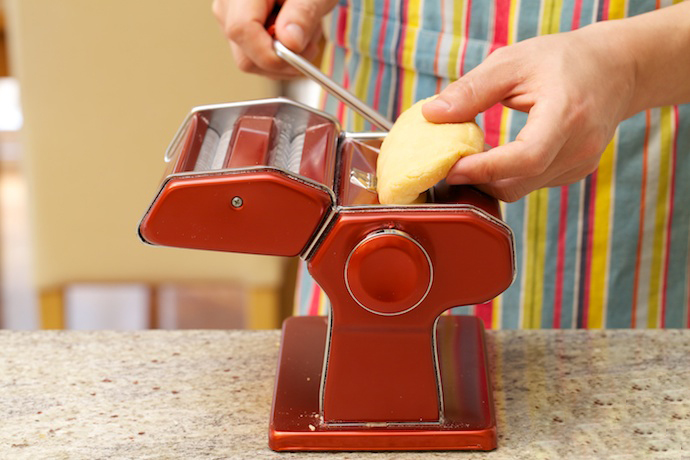 Looking at the picture below and comparing it with the one above, you can see a world of difference. 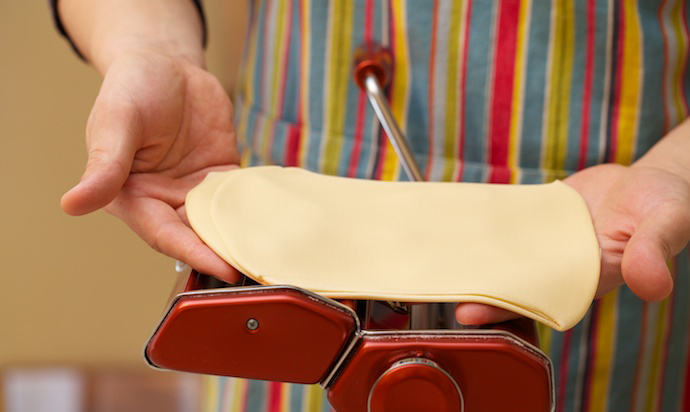 There are 10 notches on the machine to adjust the thickness of the dough. Zero is the thickest and nine is the thinnest. If you are making Hong Kong Style Fried Noodles, it is more suitable to use fine flour. For this recipe, we have pressed the dough through to eight notches on the machine. When it is pressed to four to five notches, the dough will become soft and very long. This is the time to dust some flour on both sides of the dough to avoid it sticking to the machine.

Cut it into two equal pieces with a knife. Change the thickness setting after you pass the pastry through each time until you reach the eighth notch. Then you can cut the dough into noodles. 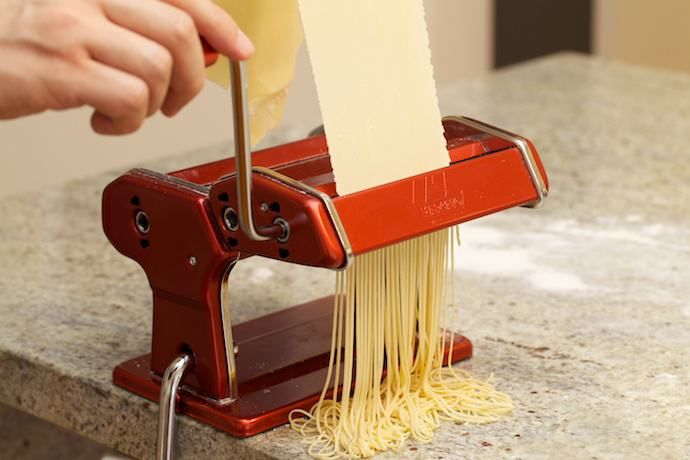 The final step is to pass the noodles through the machine to cut them. Hold the noodles gently with one hand and use the other hand to continually turn the handle. The noodles will fall into a neat bunch. Sprinkle them with a little bit of flour so that they do not stick together. Start working on the remaining dough. 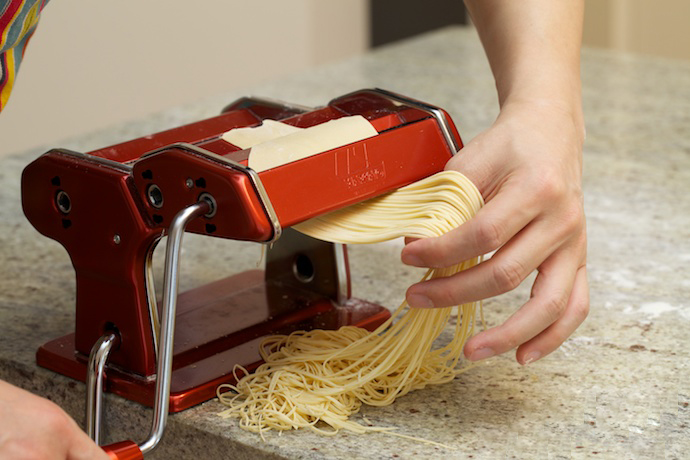 Take a pot, fill it with some water and heat it on the stove.

We are now ready to prepare the other ingredients for the stir-fried noodles.

Let’s begin with the ingredients (this recipe serves one person).

The reason we make only one serving at a time is because it is easier to cook smaller amounts of noodles to get them crispy. Larger quantities of noodles crowd the pan and it is difficult to blend in the flavors; you really need larger equipment to get the same results if you want to cook all the oodles at once. Cooking one portion at a time means you’ll get a good result with better flavor.

Measure both portions of soy sauce and oyster sauce into a small bowl and add the sugar. 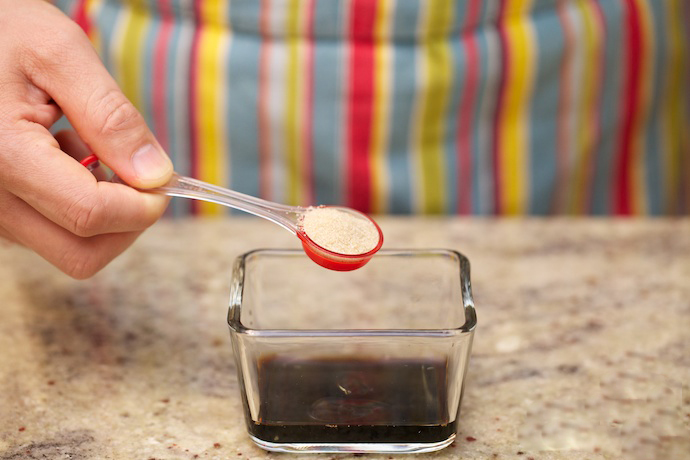 Pour in the sesame oil in and stir well. The king of soy sauce is now ready. 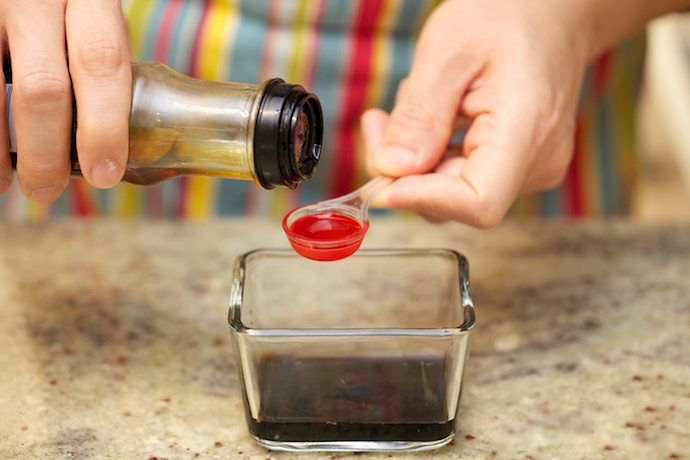 The ingredients for stir-fried noodles are relatively simple as only onion and pea sprouts are essential. For each serving of fried noodles, only ¼ of onion is required. To prepare the onion, wash it and slice it lengthways with a knife. Generally, ordinary pea sprouts are used; wash them after removing the top and base, keeping the middle part.

Here we are using the Holland pea sprouts which are more fragrant and aesthetically pleasing compared to mung bean sprouts. However, they are not as crisp. You can adjust the amount of bean sprouts to your liking, although generally a small handful is sufficient. 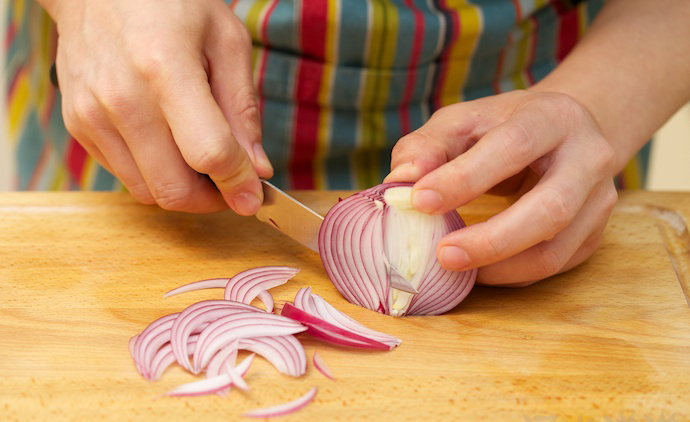 Take a flat-bottomed, non-stick pan and heat it a little. Add a teaspoonful of peanut oil and stir-fry the onion until it is translucent. Take it out of the pan and set aside. Leave the leftover oil in the pan for later. 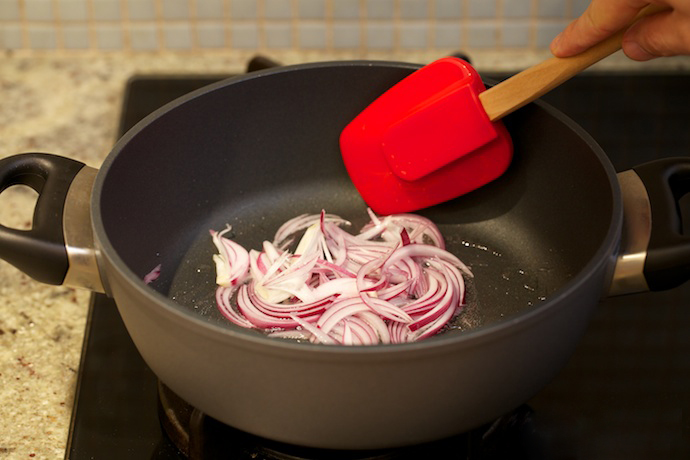 After the water is boiling in the pot, take one serve of whole egg noodles and place them into the boiling water, immediately beginning to time the cooking process. For fresh minced meat, 60 seconds is enough, the same goes for the noodles. Gently stir the noodles with chopsticks so that they do not stick together. When the time comes, remove the noodles and rinse them with cold water, flipping them constantly by hand so that they cool evenly. Turn the tap off and continue to turn the noodles over, allowing them to drain. You will need to do this two to three minutes. 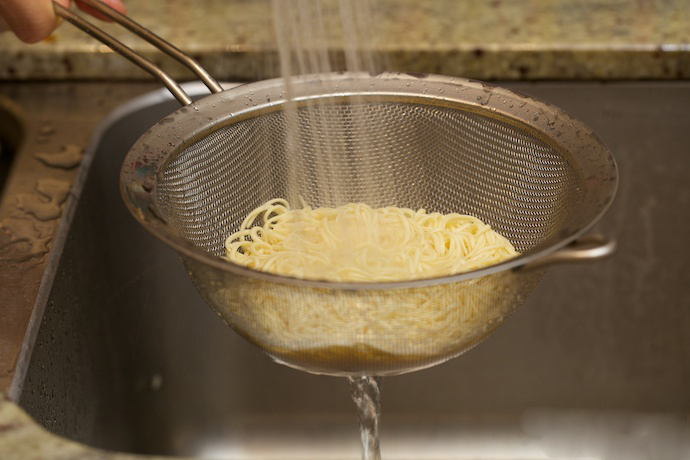 Preheat the pan, previously used for frying the onion, for one minute. Pour the noodles into the pot and start frying them. This is the most crucial part of the dish. Fried noodles contain very simple ingredients, the full flavor is gained by frying. The most effective way to cook noodles is to use a wok and heat the oil until it is almost smoking. This is a big challenge in the family kitchen, so I would recommend using a non-stick pan. Just like Dry Fried Beef Ho Fun, the recipe is not as simple as it looks.

Once the noodles are in the pan, immediately twist and stir them with chopsticks to ensure that they heat evenly. Chopsticks (check out my guide about Using Chopsticks) are the best tool for stir-frying noodles, you can use a spatula or other tools, but they are less effective, as you can’t turn the noodles evenly. The noodles must be fried on high heat to allow rapid evaporation of the water. Turning the noodles every 15 seconds is best.  Continue to use the chopsticks to stir the noodles, so that they don’t stick to the pan, which will also speed up the evaporation of the water. 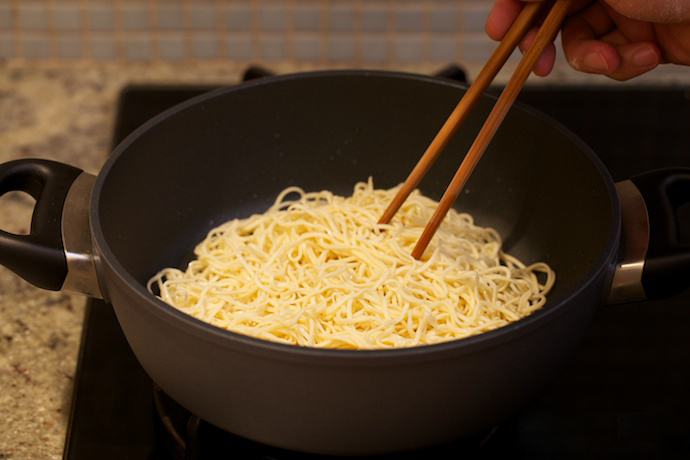 After heating the noodles for eight minutes, the water should have evaporated. Slowly pour the king of soy sauce you made over the noodles, distributing it evenly. The sauce will quickly absorb because the noodles are so dry. 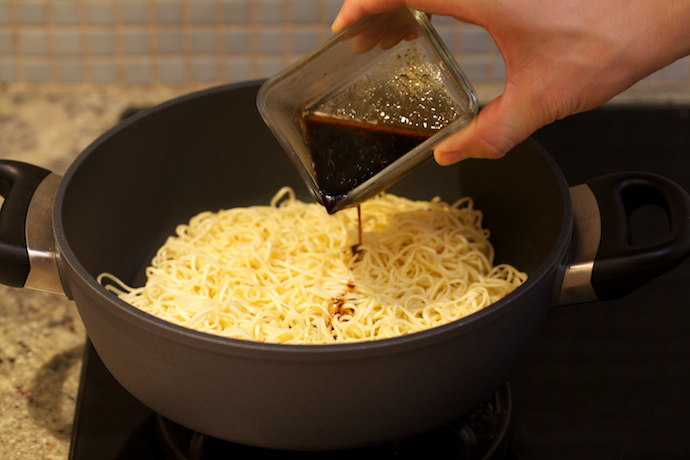 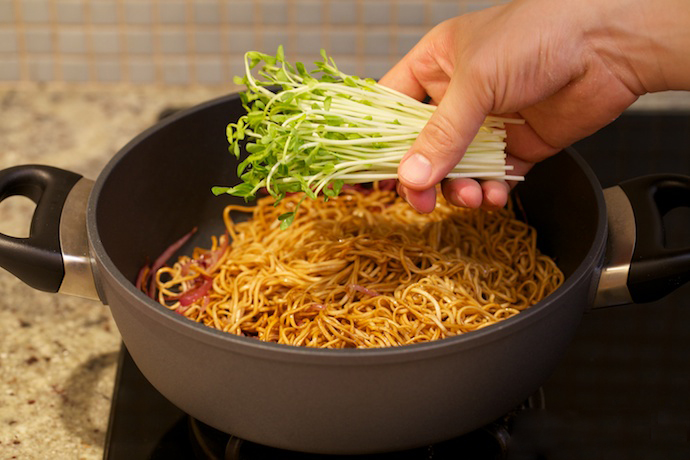 Because we are only frying one portion at a time, I strongly recommend that you don’t rush to eat it. First sit down slowly, and quietly enjoy the fragrance of the dish while everybody’s noodles are cooked. Then, enjoy!

More noodles recipes you can find below: 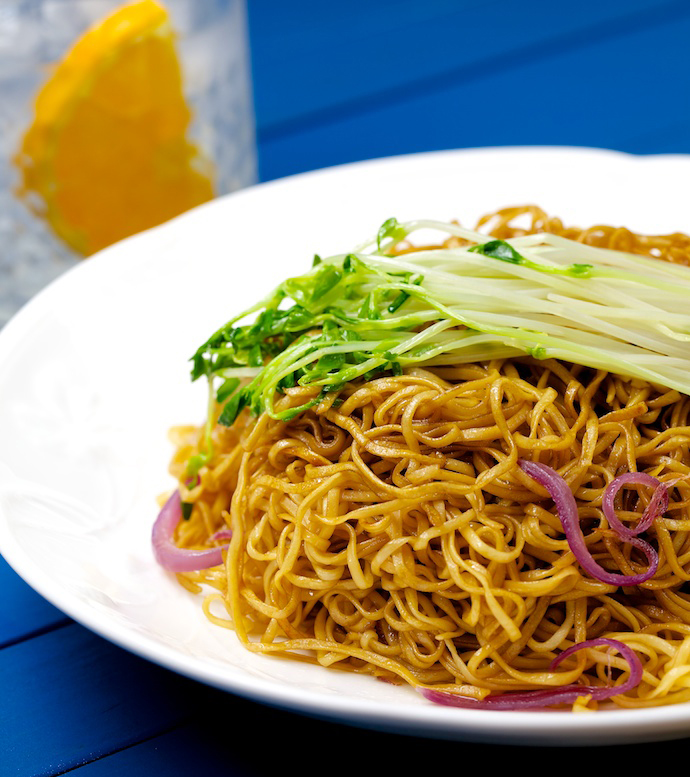 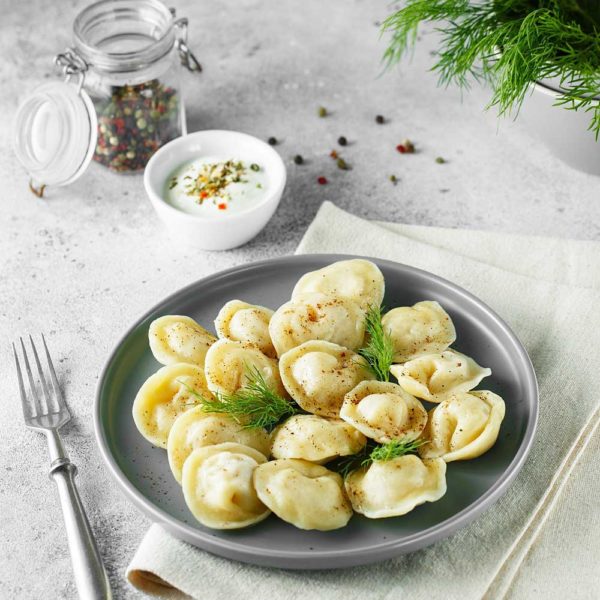 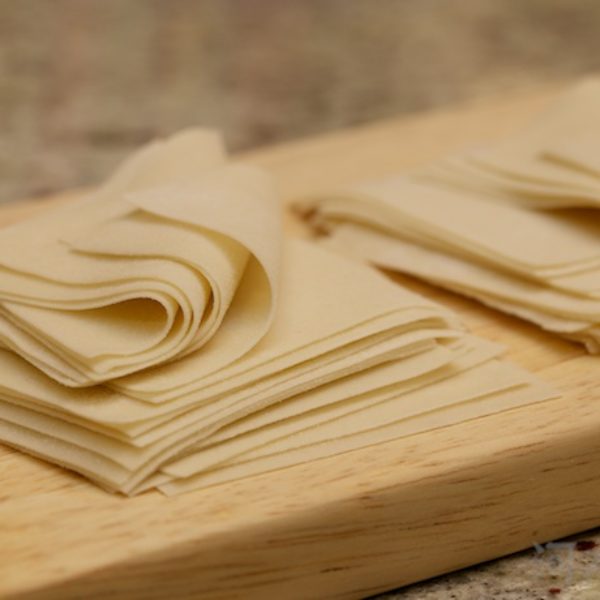 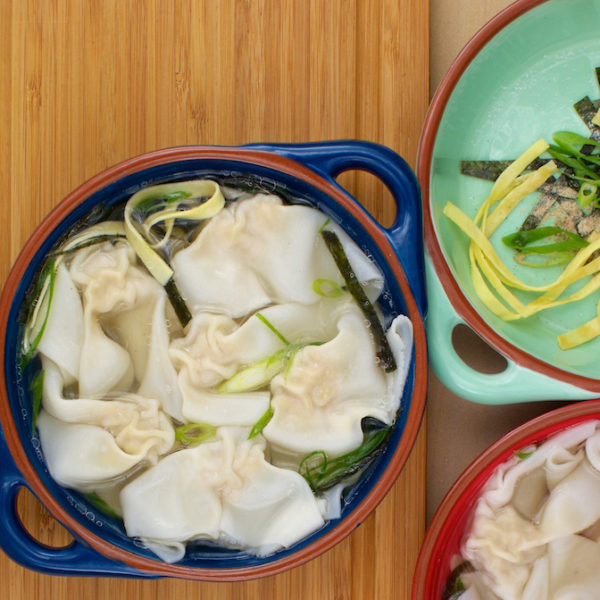 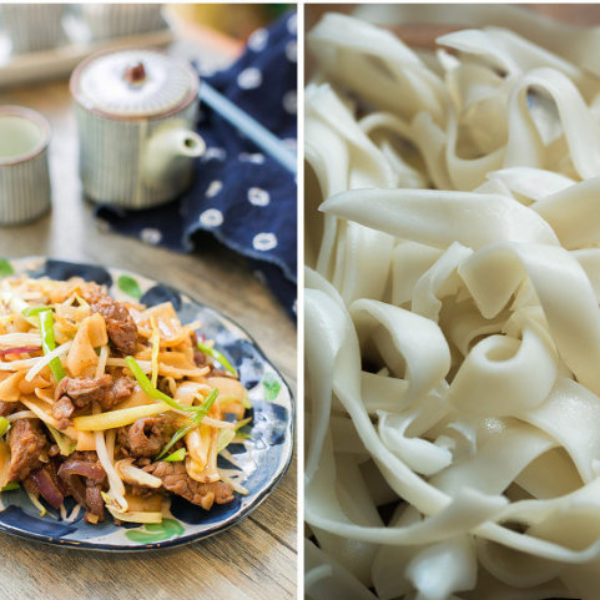 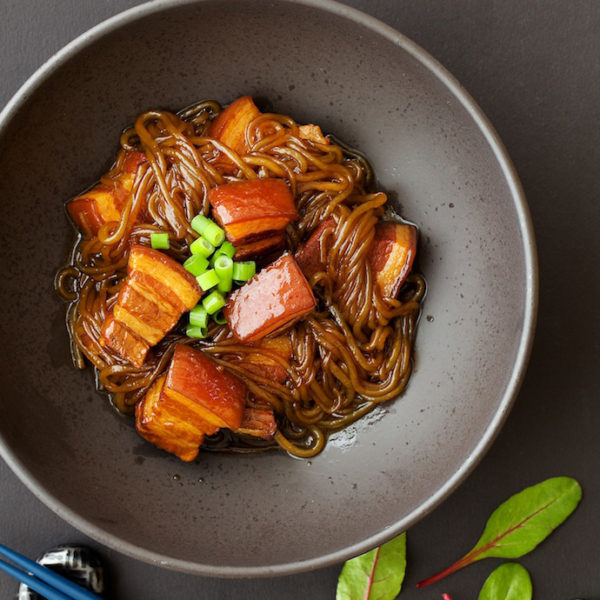