Udon Noodles are one of the most popular Japanese noodles; along with Japan’s buckwheat noodles and green tea noodles- are of the three major Japanese noodles, and are a staple of all Japanese grocery stores. 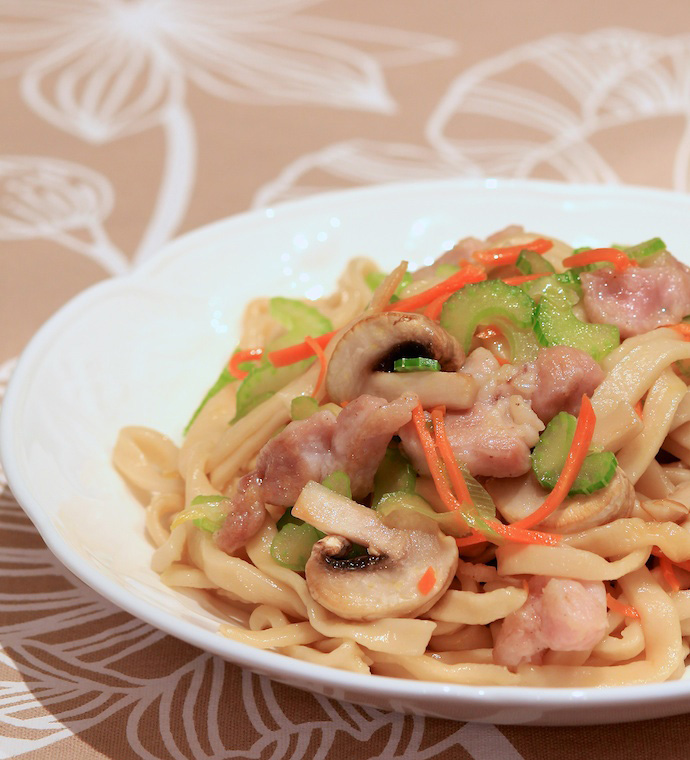 There are many sources of udon noodles, even the Japanese themselves have divided opinions.

One argument is that in the 9th century AD, people introduced pastries and other pasta from China. After several changes, by the early Eighteenth Century, udon noodles have been sold in noodle shops all over Kyoto and Osaka. However, the name of this noodle in Japanese at the time was called “餛飩.”

China actually has a similar pasta, but the name is completely different. Japan’s Ministry of Agriculture and Forestry also specializes in the specification of the udon noodle, which is roughly the surface of a round-noodle cross-section no less than 1.7 mm, and the surface thickness of a rectangular-noodle cross-section no less than 1.7 mm. The primary ingredients are flour and salt.

Like other noodles, udon noodles are also fun to make and eat. In order to achieve this effect, I found a lot of online information. After all of my research, I tried out the noodle recipes and the effect was great. Then I started experimenting with my favorite pan fried dishes.

The ratio of water and flour is very crucial when making a noodle, which directly determines the taste and texture. Many people on the Internet use the cup as a unit of measurement, which is quite inconvenient in practical use (it is not easy to accurately measure the volume of the flour). After several attempts, I concluded the following formula for noodles works best for the following dish (2-3 servings):

Of course, you can replace part of the flour with tapioca flour, which can make the noodles white and translucent.

Other ingredients needed for this fried noodle dish are as follows: 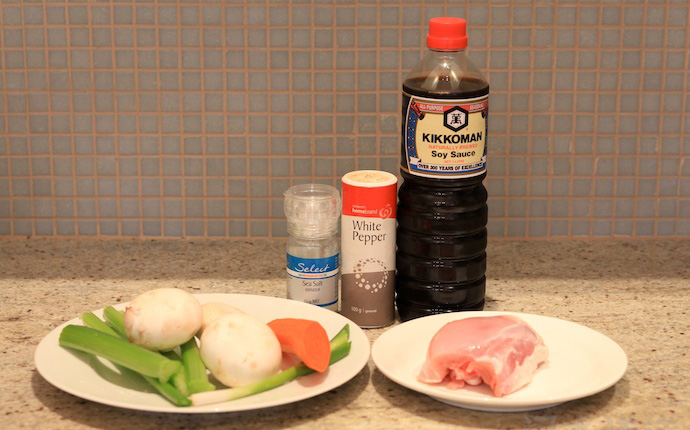 Step 2: Add 265 grams of flour, stir with chopsticks until the dough looks like this: 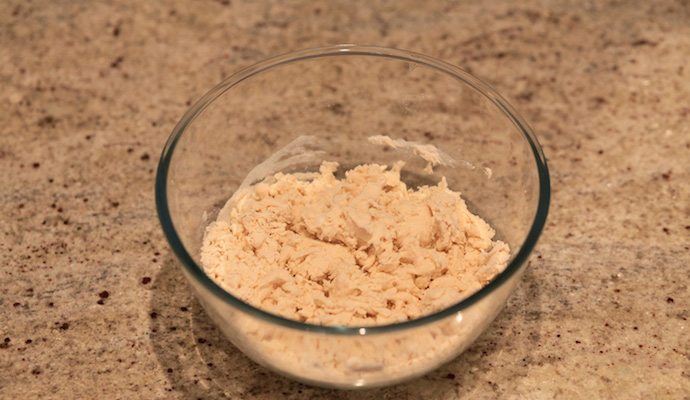 Step 3: Then pour contents of the bowl onto a clean countertop and knead with your hands: 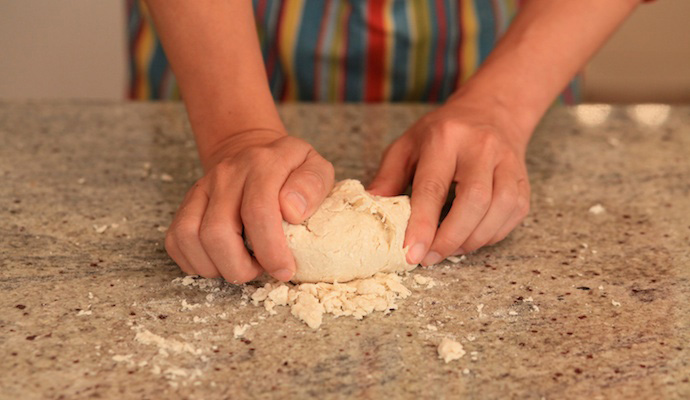 Step 4: Because the water content of the dough is relatively low, it can be done by hand. However, if you insist on continuing with your hands, the dough will get harder and harder, and you will be kneading the dough for quite a while. It is a waste of time. Of course, dough in this state cannot be used directly, this is the time we must come out our secret weapon: the bread machine. 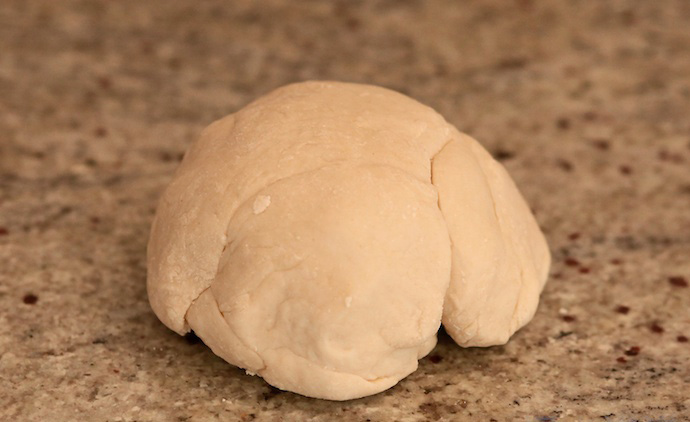 Step 5: Throw the dough into a bread machine, put it in the “dough” position, and then let it begin to work tirelessly for you. Because the bread machine uses a paddle, the kneading of the dough is relatively quick, and the toughness of the dough is no longer an issue. After about 30 minutes, it can be taken out. Now, the dough has become very smooth and uniform:

If you do not have a bread machine or noodle machine, I am afraid I can not help but take a more extreme approach. Place the dough inside a food storage bag, and then wrap in a thick towel and place on the floor. Then, take off your shoes and socks, and press down on it with your foot until the dough becomes even and smooth.

Step 6: Place the reconstituted dough on the countertop and press it into a pancake-shape by hand: 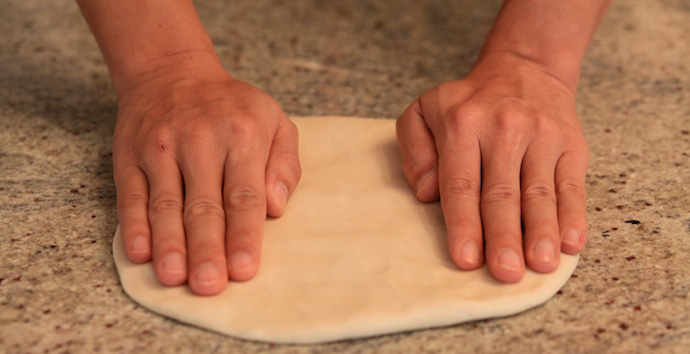 Step 7: Then fold it back in half, turn, and fold it in half again (like the year-end sale in the mall). 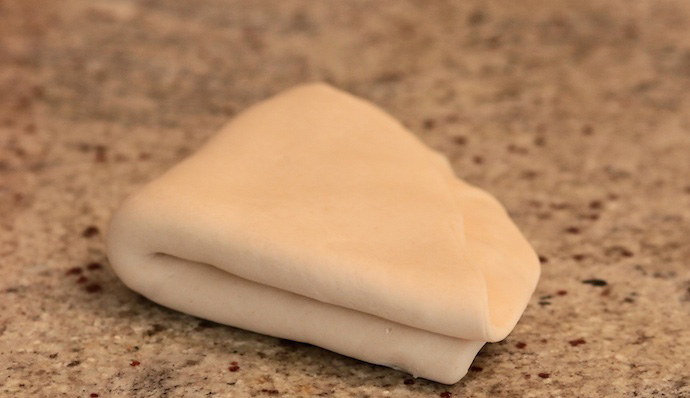 Step 8: The above process is repeated two more times (It should only be done twice because the dough will just get harder and harder). Rest for 1-2 minutes (if you are afraid that the dough surface will dry, you can cover it with a bowl or plastic wrap). Then, start rolling out with a rolling pin. Because the dough is harder, it will take some patience to roll it out:

Step 9: Roll the dough until it looks around 35 cm (the average thickness of the dough is about 2 mm at this time), and dust a small amount of flour on the top and bottom of the dough. 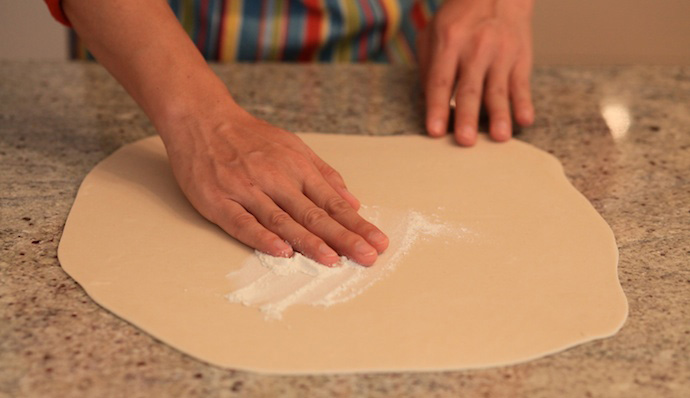 Step 10: Fold the dough until you have 4 layers, and then cut into your preferred width: 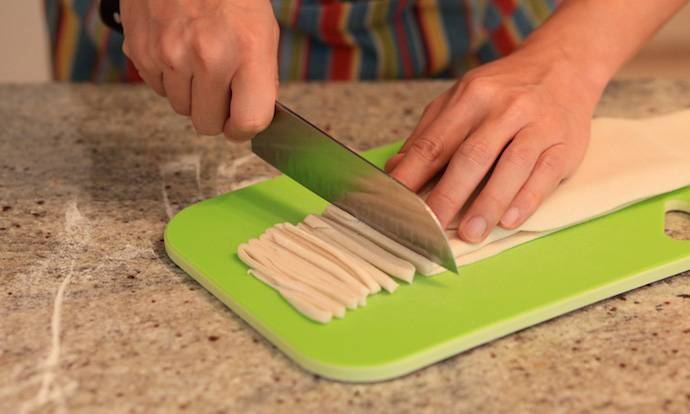 At this point, the fresh udon noodles have taken shape and are finished. I have to say that the dried noodles bought from a store will never compare with freshly made noodles.

Now we are ready to start preparing the rest of our dish.

Step 1: Cut the chicken into small, 1cm cubes. Place in a bowl, sprinkle with some white pepper and salt. In a separate, smaller bowl, whisk some egg white and flour to create a batter. Pour onto the chicken and mix until evenly coated. Put aside for 30 minutes to rest.

Step 2: Cut the celery and green onions width-wise, and the carrots length-wise: 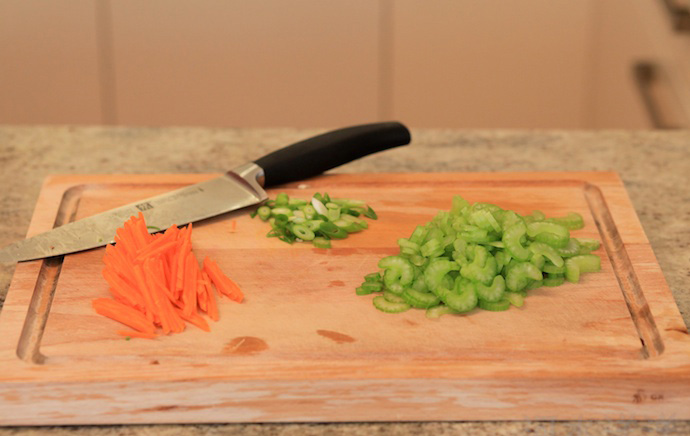 Step 3: The mushrooms are cut into 8 equal parts with the head of the mushroom laying flat on the cutting board.

Step 5: Using the same pan, arrange the mushroom in the pan evenly. Sprinkle some salt and pepper for seasoning. Wait until the bottom of the mushrooms are golden, turning them over to continue cooking. When the mushrooms are a golden color on both sides, put on a plate and also set aside. 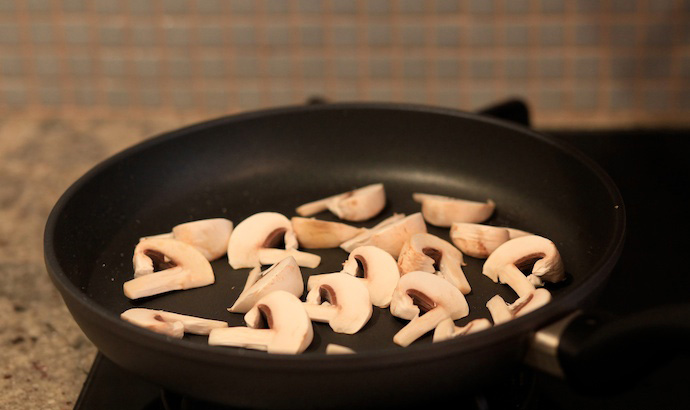 Your set-aside product should look somewhat like this so far:

Step 6: Using a deep pot- add water to 1/2 capacity, and bring to a boil. Put the udon noodles in gently. While using a wooden spoon, constantly stir the water in the same direction so noodles also flow with the water, making sure they will not stick together.

Cook for 3 minutes and 30 seconds, strain the noodles, and then give them a cold-water shower to wash away the starches on the surface. 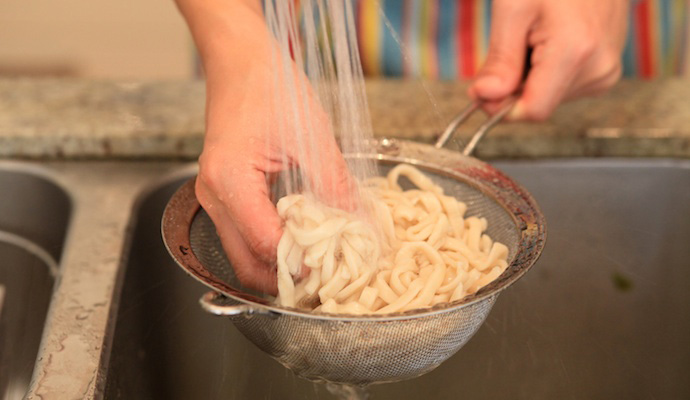 Step 7: Heat a pan and add a small amount of vegetable oil. Sprinkle in the green onions, stir-fry slightly. Then add the carrot and stir until the carrot is slightly softened with no raw flavor and sprinkle with a little salt for seasoning.

After, add the sliced celery. Stir fry celery until the surface is somewhat translucent. You can then add the strained udon noodles and stir-fry with soy sauce. Because soy sauce is the main seasoning for this dish, try to use the best you can find. 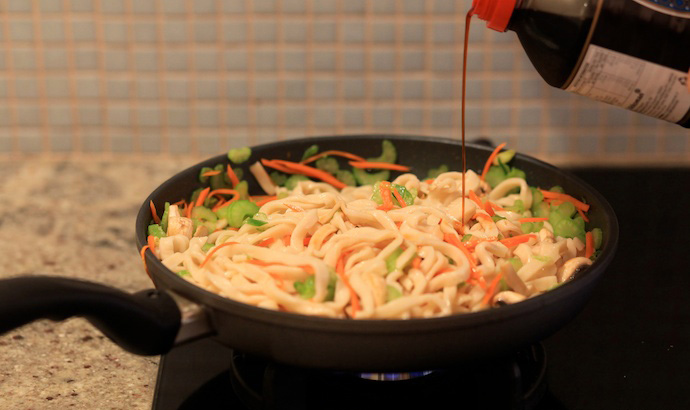 The utensil is very important when frying! It is best to use a flat, silicone tipped utensil, so it does not smash or break the noodles. The stir-fry process must also continue to try to ensure that the udon noodles in the pan absorb your favorite seasonings and flavors.

Step 8: Finally, put in the fried chicken and mushrooms, stir well until cooked.

To properly enjoy this dish, I use chopsticks. To say that these udon noodles quiver and dance along your taste buds with explosive and delicious flavors and textures is not an exaggeration.

1) Udon noodles texture depends on the formation of the dough, so a bread machine or noodle machine is strongly recommended.
2) The time to cook fresh udon noodles is somewhat quick. Too long and the noodles will lose strength, and could turn mushy when stir-frying.
3)Cooking with a non-stick pan can reduce the amount of oil, so that the whole dish becomes healthier! 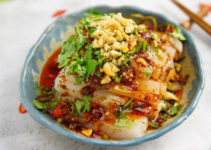 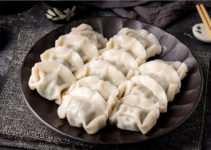 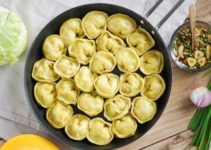 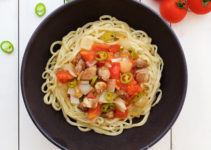 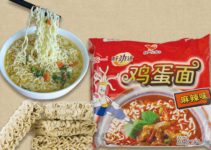