A few years ago, my husband made dumplings, but I always felt the stuffing was too dry, unlike the ones you could buy, which were deliciously juicy. I told him it would be better to add some water to the meat, but unfortunately, he said that the water might leak out.

On doing some research, he found that adding meat skin stock was the secret to juicy dumplings. The way it works is very scientific: when the meat stock is frozen it remains jelly-like, and so will not penetrate the dumpling dough. When the dumpling is cooked, the meat skin stock becomes liquid, encapsulating the delicious juice.

Since then I endeavored to master the technique for perfect meat skin stock, which I will share with you here.

Firstly, the main raw material of my meat skin stock is pig skin. A few years ago, the skin used to make meat skin stock was from the pork trotters, which is not ideal, because they don’t have the best flavor.

But then I found a supermarket selling ready-made meat skin at only $4 per kg, so I bought some.
Ingredients for pig skin stock are pictured here: 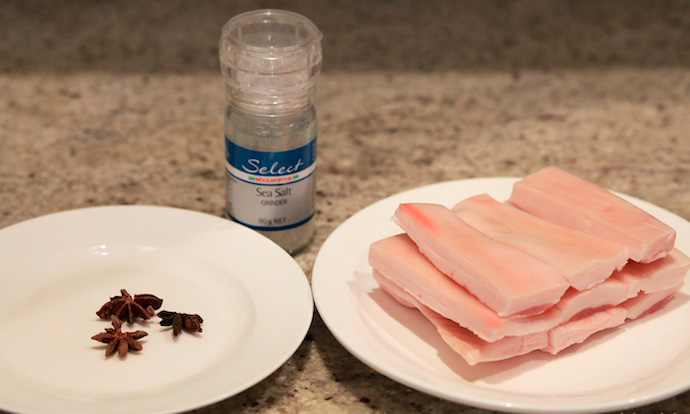 The main ingredients are 350 g pork skin, which is the amount shown in the photo. It was in one whole piece, but I have cut it into 10 x 3-5 cm pieces to make the cooking easier.

The only other ingredients are sea salt and a few star anise, which are not essential but do make a tastier meat skin stock.

The next step is very simple, first place the meat pieces into the pot filled with water inside and bring to the boil. 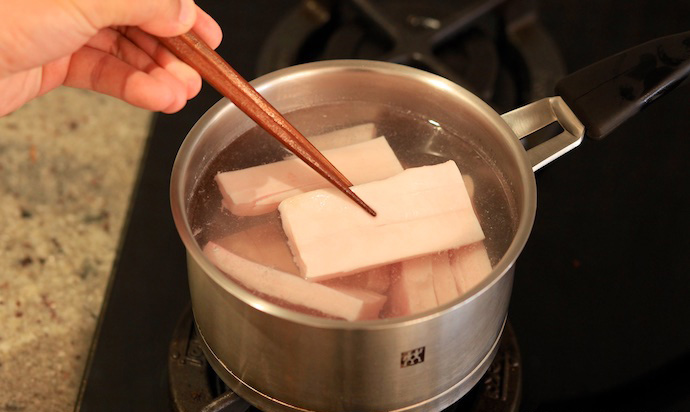 Turn the stove to low and continue to cook (about 5-10 minutes) until the pig skin color darkens, becoming slightly translucent, looking like this: 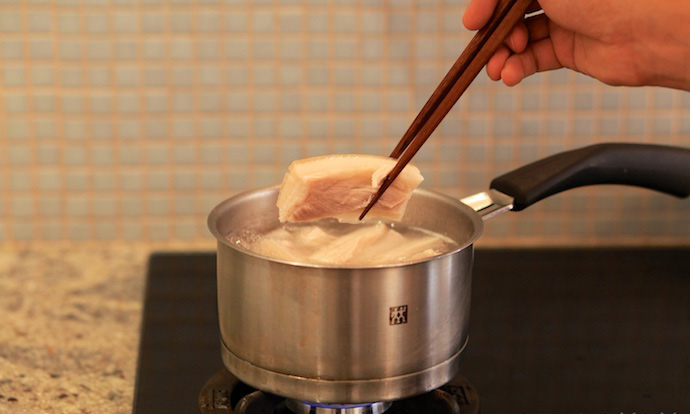 Remove the pot from the stove, take the meat out and plunge it into cold water to wash away the foamy residue. Wash the pot to remove the foam.

The following process is to remove the fat attached to the flesh, otherwise, a layer of white lard will form on the surface of the frozen meat, which does not impact the taste too much, but is mainly for a better look.

The other reason for doing this is that cooked meat skin is easier to cut than raw pig skin. Use a good sharp knife (sharpen if necessary) to remove the rind. 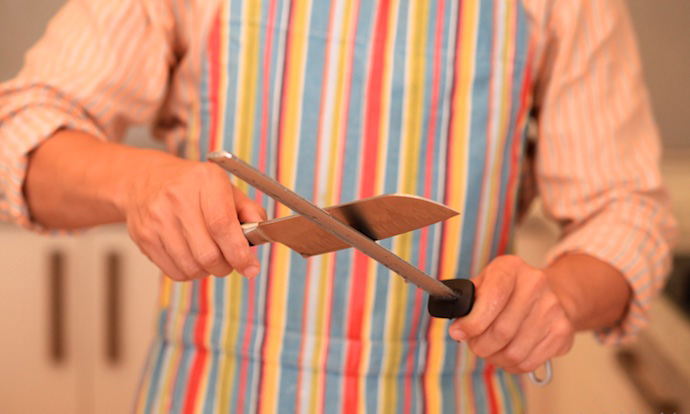 For safety reasons, it is best to hold the flesh with a fork instead of your own finger. The fork will prevent the meat slipping on the cutting board, and not block the line of sight. Align the knife horizontally where the fat and rind join. 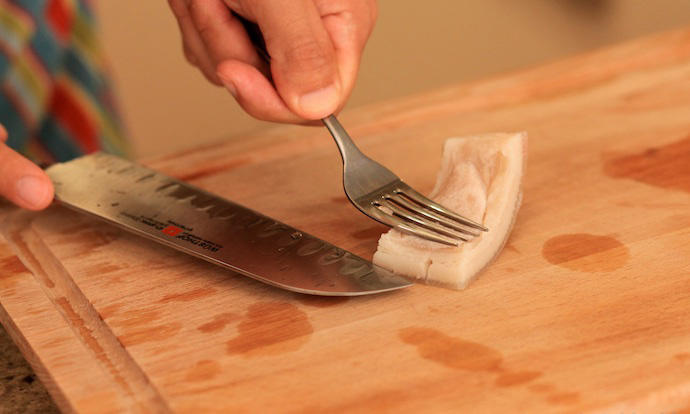 The knife should slide easily between the rind and fat. 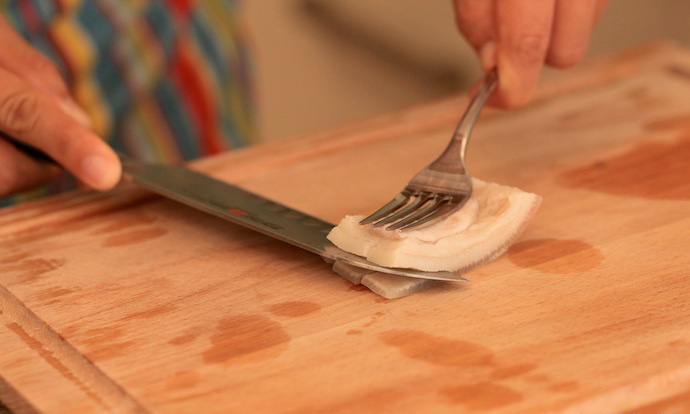 After Cutting the meat, it looks like this, without any fat: 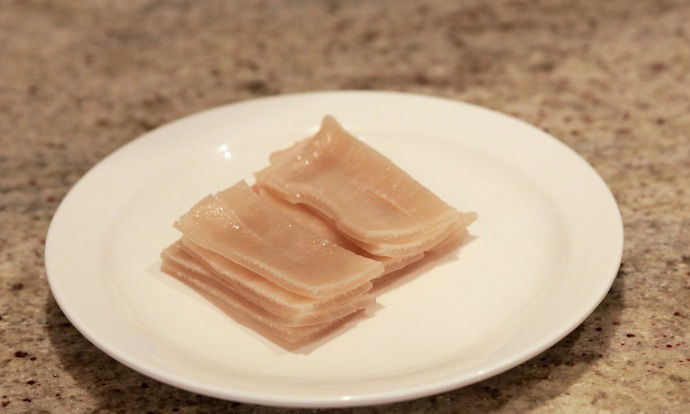 Next, chop each piece of pig skin into small pieces, the finer the better, because meat skin stock is made from the collagen, chopping finely will increase the surface area and thereby the extraction of collagen. 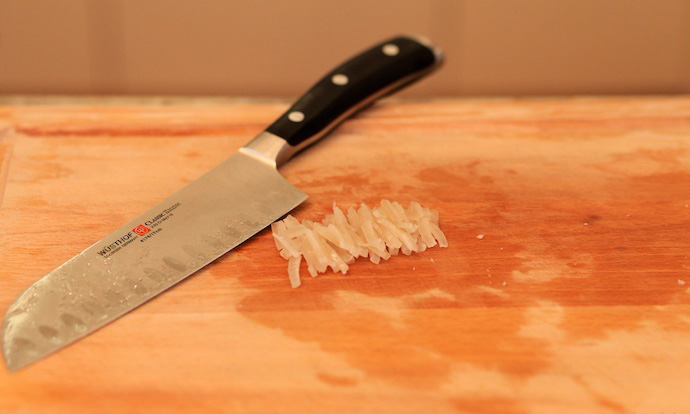 Pour water into the pot. The amount of water does not matter because later you need to keep adding water. Put the pork into the pot and heat. When the water is boiling add the star anise and salt. You do not need to put in a lot of salt since when you use the meat skin stock in your cooking, more will be added then. 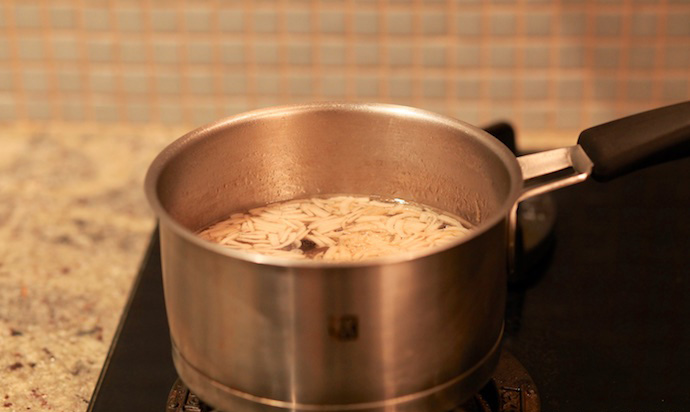 When it comes back to the boil, turn down to low and simmer, uncovered. During this process you will need to pay attention to the temperature of the stove. Do not set it too high so that the water evaporates too fast, and not too low; adjust it to keep the water boiling, but not boiling rapidly.

This is a long process, taking about 3 hours. You may need to top up with cold water during this time to avoid it going dry. To know exactly what amount of liquid to cook the pig skin in is tricky, and it may take 2-3 times before you get it right.

If the water content is too high the stock will be weak tasting and break easily, and if it is too low, you will not get much stock in the end. People will say, ha! So much meat to make such a small finished product? Ha ha.
Pick out the star anise and pour the cooked liquid into the mold. 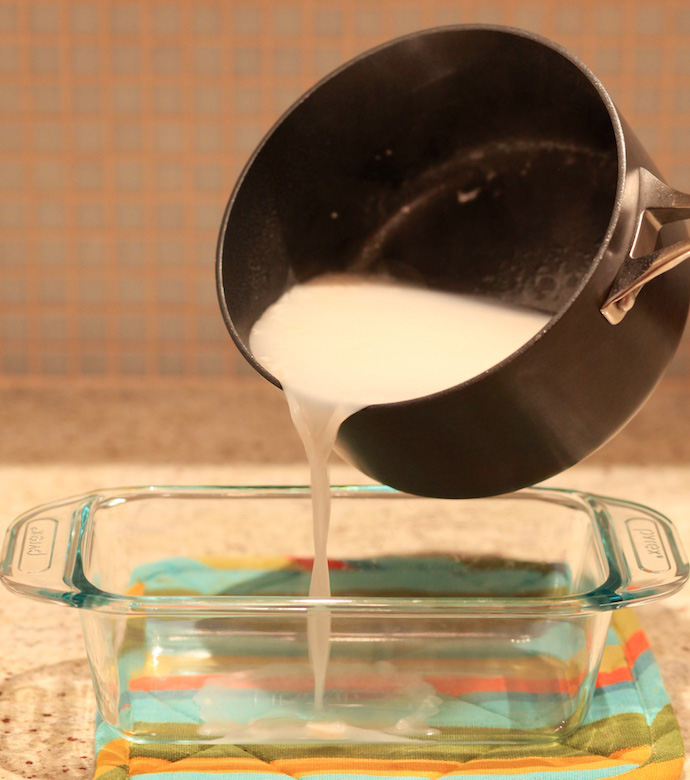 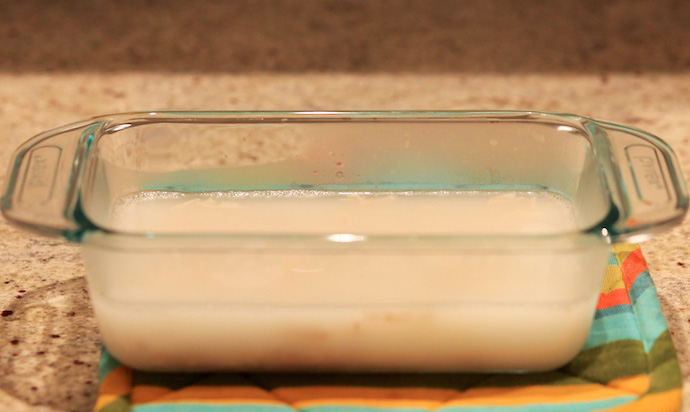 Cover the mold with plastic wrap and put it in the refrigerator freezer overnight. (Do not put it into the freezer in the freezing room, as precipitation will form due to the lower temperature.) The next day it can be cut up. 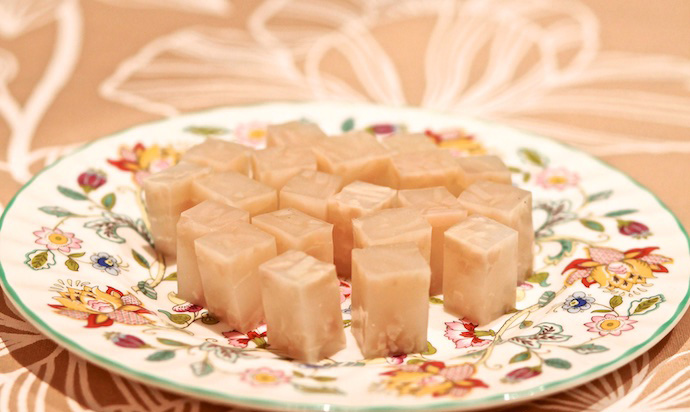 In the pursuit of more crystal-clear effect, strain the stock so no solid pieces of skin are present. 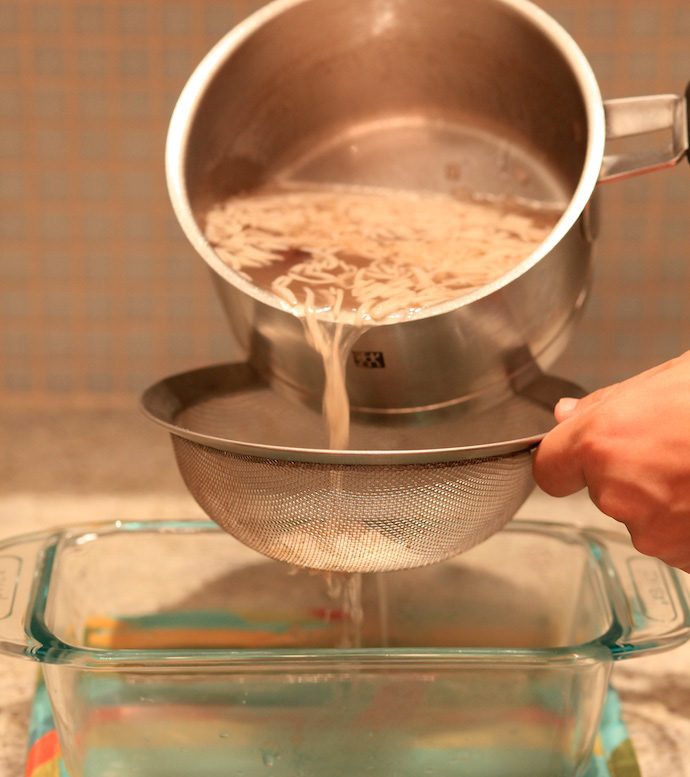 After a little cooling at room temperature, cover the mold with plastic wrap and put it into the refrigerator room overnight. It should set nice and clear. The finished product is somewhat yellow, because of the star anise. If you don’t like this color, omit the star anise, or add it in the last half hour of cooking. 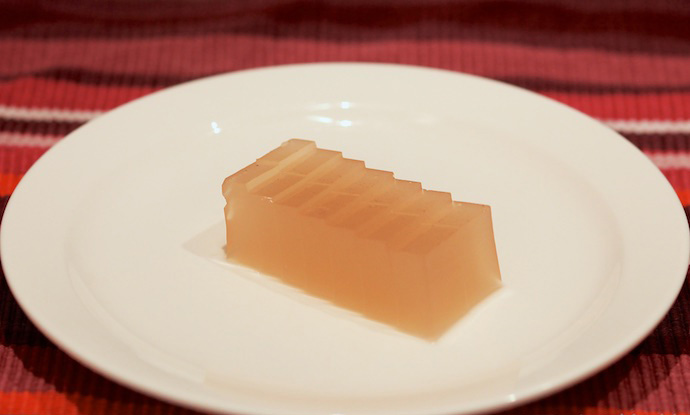