Everyone loves Red Braised Pork Belly; it really is irresistible. The ingredients are simple, just pork, sugar and soy sauce, but making it is not as easy as it sounds.

It does take some skill, which I will enlighten you on today. Braised pork has been around since ancient times, and the cooking expertise has been handed down through the centuries by highly skilled cooks. 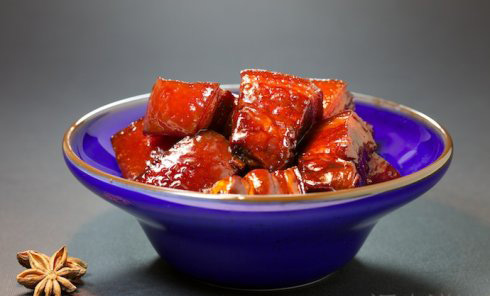 More than 900 years ago, Su Dongpo, the most famous of all braised pork fans, worked tirelessly to perfect the technique of making the perfect braised pork.

All other cooks who followed him refer to his method and consider him to be the number one authority on the subject. 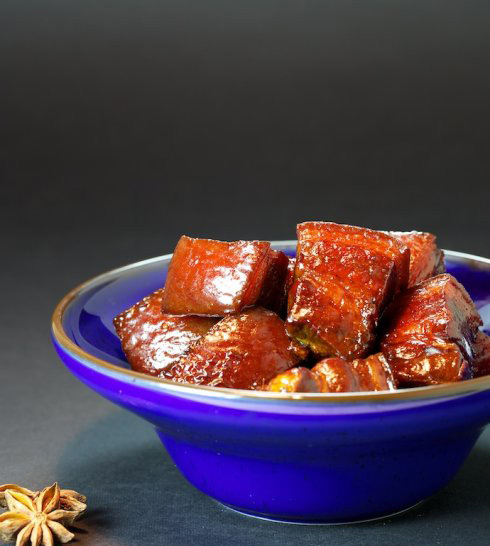 Su Dongpo concluded that three things are essential to make great braised pork: the pot must be clean (!), and you must use as little water as possible with low heat so that it stews slowly.

This dish cannot be rushed; you must be patient. Su Dongpo’s words are regarded as the “bible” of braised pork cookery. It is no wonder that Jiangsu and Zhejiang style pork is called “Dongpo meat.”

According to my understanding, there are only two challenges to cooking the perfect Red Braised Pork: producing the right color which should be “red as glass”, and perfect, melt-in-your-mouth tenderness of the meat. If either of these is lacking, you will be disappointed with your results.

The 2012 MasterChef (American version) Champion, Vietnamese Christine Ha, made Braised Pork Belly in the final, but the color of the pork dish was not up to standard in my opinion and did not reflect the name Red Braised Pork Belly. Though, my opinion may not matter with those attaining to such heights.

Now, here is what you will need to make the perfect Red Braised Pork Belly:

Some people like to use more than this to make a big pot since it is so delicious. For small families, 500 grams is a more appropriate amount, as it is better not to overdo this dish.

Its richness may cause you to regret eating too much. It is better to end this meal nicely satisfied and with a good impression, which is always the healthier option.

For this recipe, I prefer the streakier pork from under the ribs rather than from the abdomen, which is fattier. Choose a piece with several thin layers of fat through the meat.

Slice the pork into 3-4 cm square pieces. Any smaller and the meat will dry out, any bigger and it will exude too much oil. 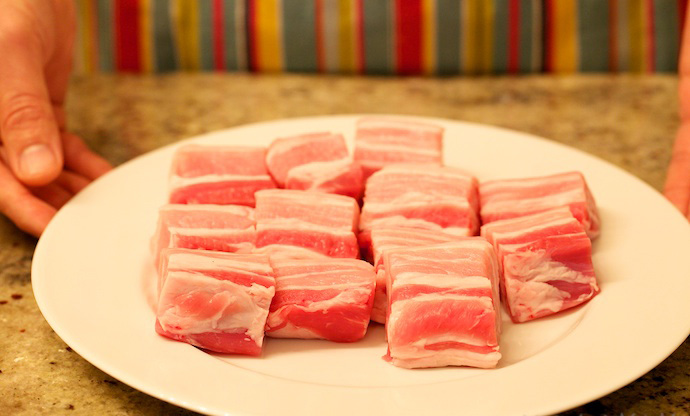 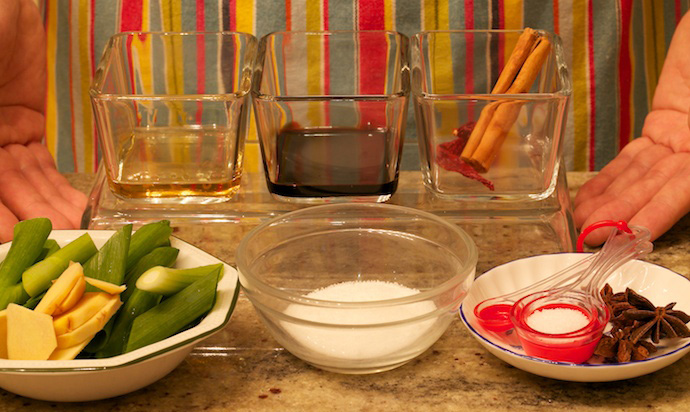 Firstly, gather all the ingredients and have them at the ready so you are not interrupted during the cooking phase. Pausing in the middle of the cooking will affect the flavor.

Secondly, the pork must be pretreated. Traditionally at least three kinds of treatment are applied: deep frying, boiling in water and stir-frying. You could also try the Western method of shallow frying by preheating the pan for 90 seconds and cooking in a small amount of oil in a frying pan. 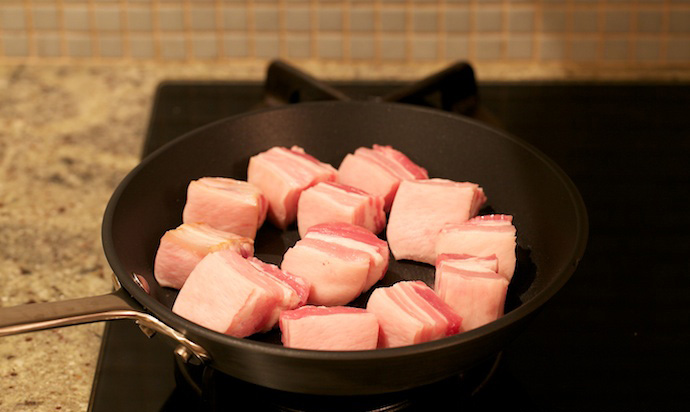 In a non-stick pan, fry the four sides of the pork pieces only, (not the top fatty side or the lean bottom side, otherwise the meat may lose its shape), until they are golden brown. Frying this way removes some of the fat, and the caramelization of the pork will add flavor to the stock.

Gently turn the meat using silicone tongs to help protect the shape of the pieces. Remove the pork from the pan and place onto a plate. Cover with foil to keep warm. 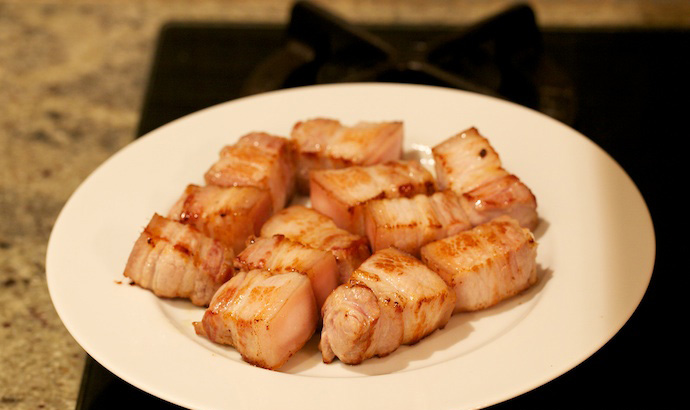 The third step is to ‘candy’ the pork. The ‘red’ color is produced from the color of the caramelized sugar. Sugar caramelizes at 170 degrees Celsius.

It is not absolutely necessary to do the caramelization of sugar separately at this point, and it can be done later at the liquid reduction stage producing the same full flavor. I explain how to do this in this article. However, it takes longer to reduce the liquid at that point, and it can cause the meat to dry out somewhat. Making the caramel at the earlier stage can avoid these problems.

It is best to use a stewing pot to make the fried candy so you can mix the meat and sugar together. The right choice of stewing pot is critical as it will directly affect the quality of the finished product. If the red pork meat dries out or is tough, in all likelihood, the wrong kind of pot is the cause.

When choosing a suitable pot for this dish, it is important the lid seals tightly and does not have a vent. I didn’t think this would ever make a significant difference. However, I noticed when I cooked rice in a pot with a vented lid, the rice was hard on the surface. When I cooked it with a tight lid without a vent, the rice was soft. So, I applied this to cooking pork, and the same thing happens.

The other important thing to consider is the uniformity of thermal conductivity of the pot base as overheating causes meat and juices to stick. A good quality heavy-based stainless steel pot will heat evenly and cook better.

Some people are under the impression that casserole thermal conductivity is relatively uniform, but in fact, it is not. Casserole dishes have low thermal conductivity causing uneven heat distribution. I recommend a stainless steel pot, which is better than a cast iron one.

First pour 10 g of peanut oil inside the saucepan and then pour 30 g of sugar over it. The role of the peanut oil acts as a thermal conductor and accelerates the melting process of the sugar. 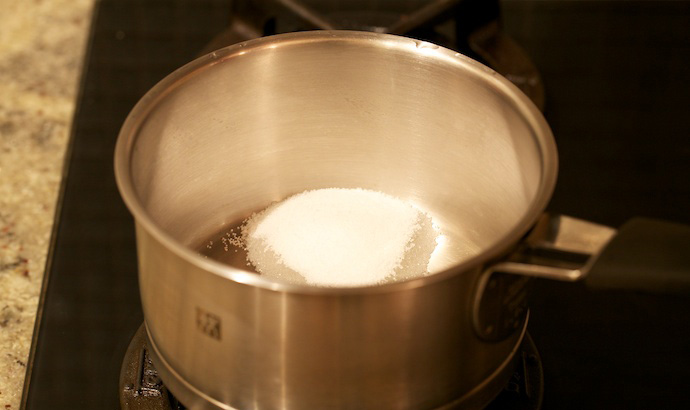 Heat on high until the sugar gradually melts and turns a golden yellow. 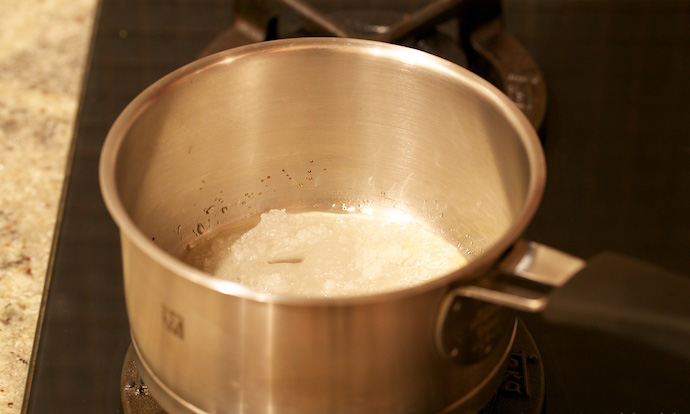 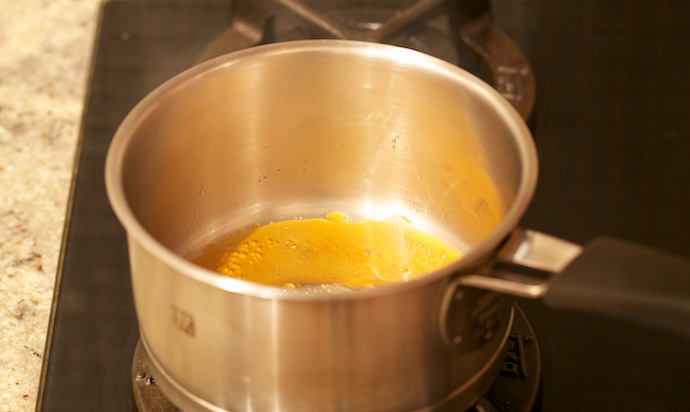 At this point you need to turn the stove down to a minimum.

Caramel discoloration happens very quickly, in a matter of seconds, so you need to keep a constant eye on it.
Wait until the sugar turns reddish brown, and then remove the pot from the stove. 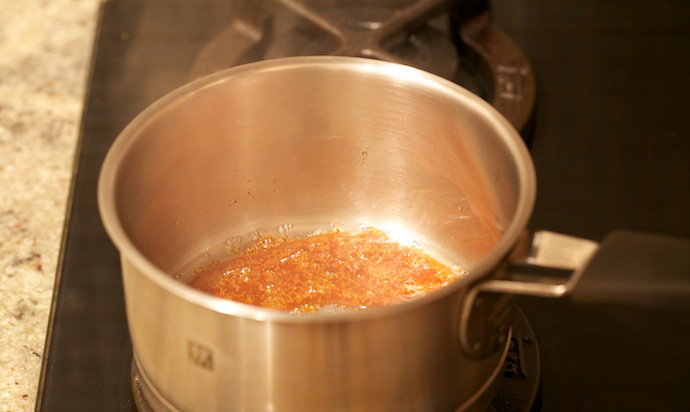 Using tongs, carefully add the prepared pork pieces, turning gently to coat in the caramel. Do this in batches: if you put all the meat in at once the meat juices mixed with hot sugar will spatter. Two things are important here: keep the shape of the pork, and avoid hot juices spattering. 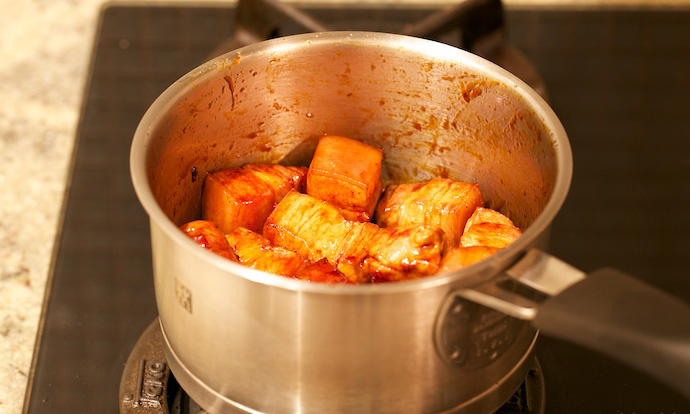 The fourth step is to stew the pork. Place the chopped onion, ginger, star anise, cinnamon and 20 ml of soy sauce to the saucepan and toss to combine evenly. 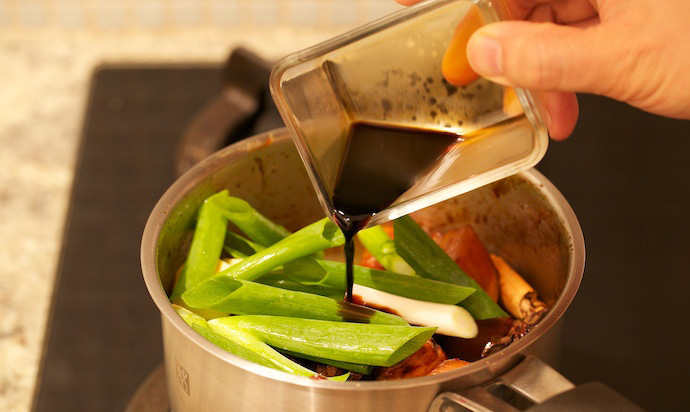 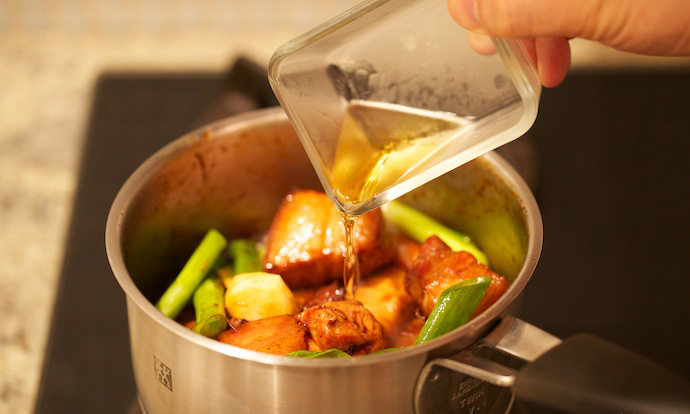 Finally pour in the boiling water, making sure to pour it on the sides of the pot not directly on the meat, or the candy will be washed off the pork pieces. 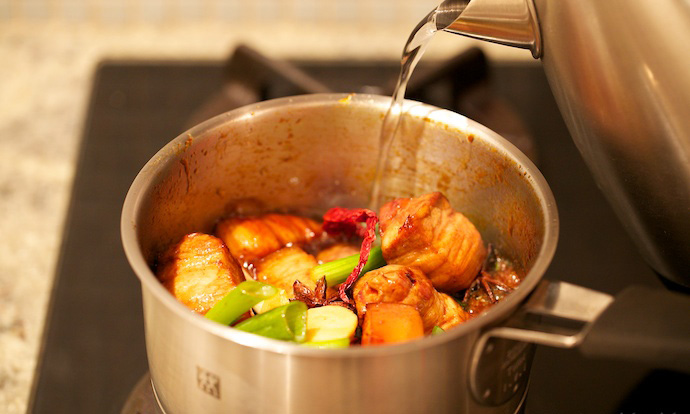 Fill to about 3/4 of the height of the meat and add 1/2 teaspoon of salt (3-4 g). For the pork, as Su Dongpo said, there should be less water than pork. If the pot lid fits tightly, no more water is needed as all moisture will be retained. A poorly fitting lid will cause the pork to dry out. 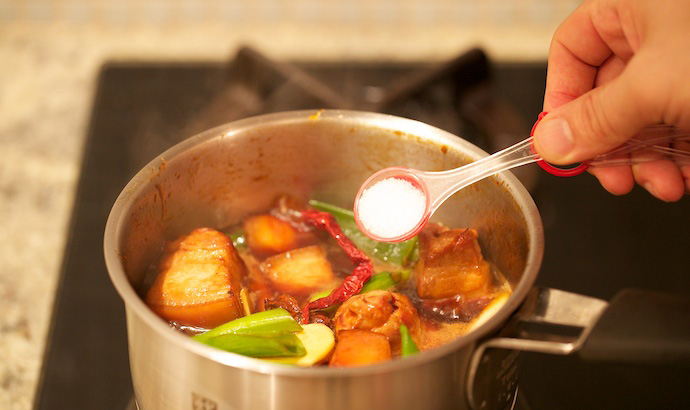 After it has come to the boil, immediately transfer the pot to the smallest hotplate on the lowest setting. Simmer for about 90 minutes.

The fifth step is to reduce the pan juices. Strain the juices into a heatproof jug to remove the spices. 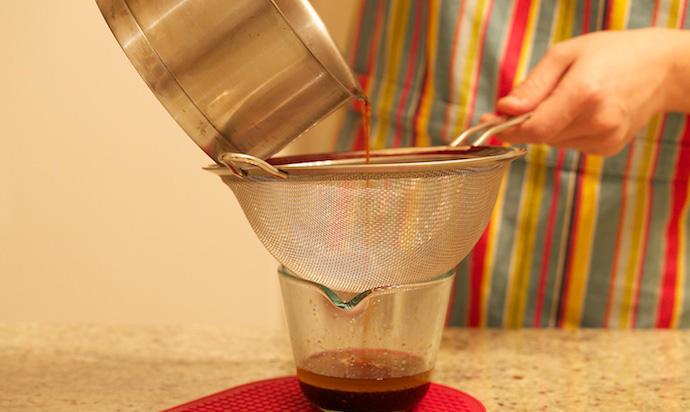 There will be a layer of oil on the surface of the pan juices, which is neither healthy nor delicious, so we need to skim it off. 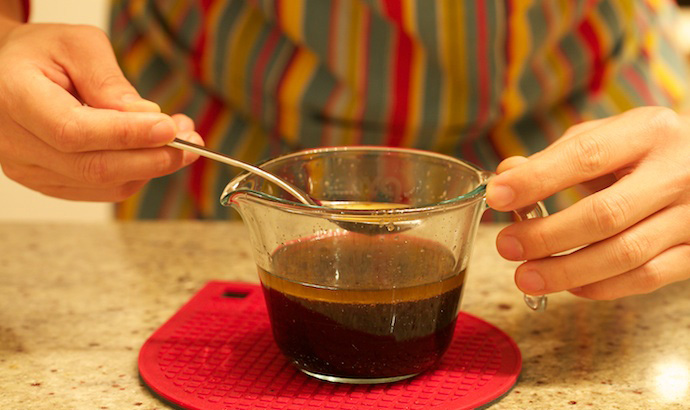 Pour the remaining liquid into a pan and heat. 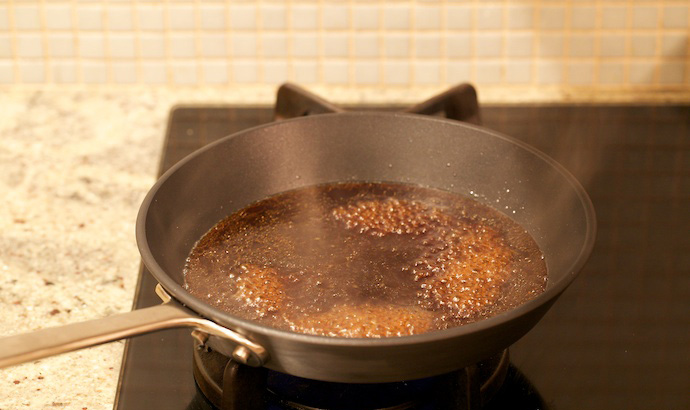 The liquid contains a lot of pork skin precipitation and needs to be reduced. Gently simmer until it reduces to the point that when you run a spatula through it, it will separate long enough to see the bottom of the pan. 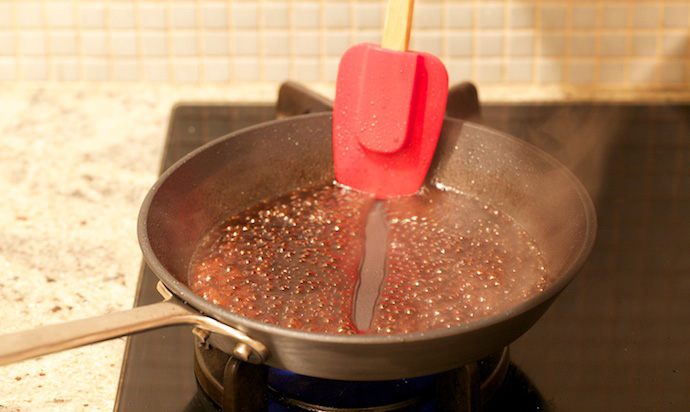 Once the liquid has reached this syrupy state, turn off the stove, and transfer the pork from the saucepan to this pan. Gently toss to coat. 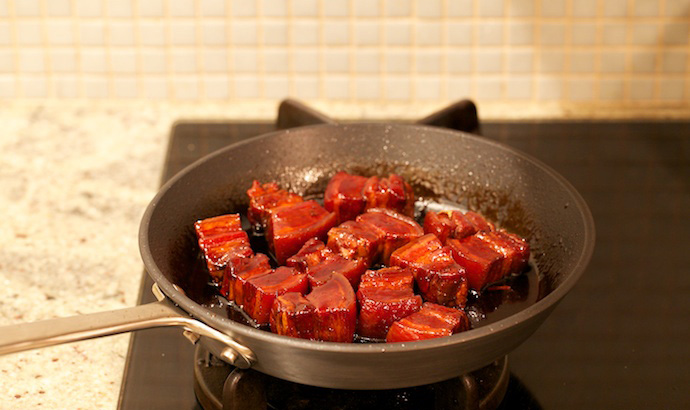 How good does that look? Don’t look too long, do not delay a second, eat the pork immediately. It tastes even better than it looks, but if you leave it too long the pork will harden and go cold, tough and dry, losing its soft waxy texture. So, seize the moment and tuck in!

Remember these tips for perfect results:

1) Pan frying to a golden yellow increases the flavor.
2) Choose the right pot, be sure the lid seal is tight and the base has good thermal conductivity.
3) It is quicker to make the caramel separately at the beginning as I have done rather than at the end.
4) Skim the fat from the pan juices before attempting to reduce it to a syrup.