How to Rehydrating and Clean Sea Cucumbers (With Recipe)

Sea cucumbers are a unique and exotic food. They can be eaten after being washed with water, but they must be carefully prepared.

This kind of supplemental treasure is unique and delicious. Those who have not made any sea cucumbers do not know where to start after getting the dry ingredients.

So, how do dried sea cucumbers come to be edible? 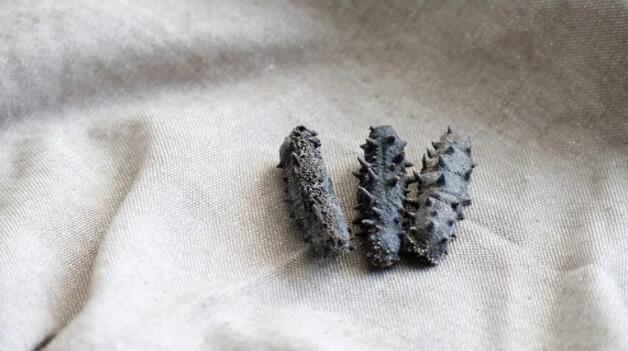 Before I begin, I think it is necessary to explain first that the rehydrating of sea cucumbers takes a long time. Therefore, recipes using sea cucumbers as ingredients must be prepared in advance.

You need to adjust the length of time according to the size you buy. But don’t worry, I will talk about how to judge whether the rehydrating is completed and it’s not very difficult for you to complete the process.

The sea cucumber should be one of the representative impressions of Zhongshan seafood. But to be honest, other sea cucumber dishes are not particularly difficult. I will introduce a recipe for sea cucumbers below.

The difficulty is the full hydration of the sea cucumber. If it is not done fully or correctly, you will be unable to chew them and they will not taste very good…

The sea cucumber that I bought was not big. It was a little larger than my little finger.

The pictures below are to facilitate the cleanup of the sea cucumber. Therefore, the standard for judging the quality of sea cucumber soaked is very simple. Look at whether the sea cucumber is soft enough to be cut with scissors.

Sea cucumbers, whether they are large or small, must be soaked for at least 24 hours. If your sea cucumbers are large, the time for this will have to be properly extended. You have to use scissors to cut the Sea cucumbers to test if it is completely soaked.

Step 2: When the sea cucumber is soft enough that it can be cleaned, you can use the scissors to clean the stomach of sea cucumber. (which is very dirty, so this may take some time)

You can find a natural crack near the belly of the sea cucumber. Cut along the crack to the two ends, and then pull out the internal organs, the teeth and the dirt.

Step 3: After taking out various impurities, it is necessary to process several longitudinal internal ribs on the abdominal wall of the sea cucumber. This rib is very nutritious and should not be removed. Use scissors to cut each of the internal ribs into 3 and 4 segments along their length.

Once the cuts are made to the stomach, remove the internal organs, and cut the internal ribs, do not forget to rinse the cucumber with clean water at the end. 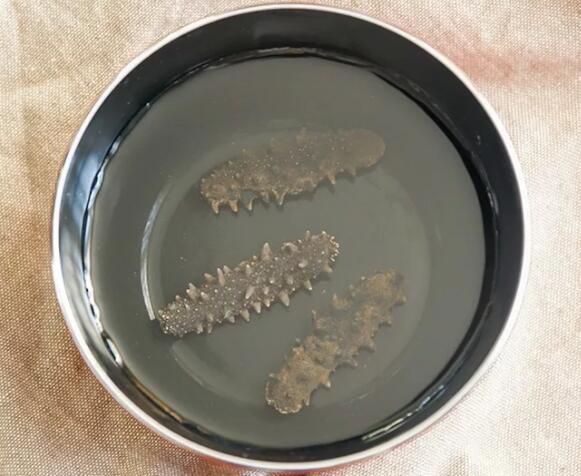 The sea cucumbers before cooking (pictured above).

Step 4: The clean sea cucumbers can then be cooked, and the pans must be completely oil-free and salt-free. Pour in pure water to submerge the sea cucumbers, put on the lid. Once the water begins to boil, turn down the heat and let simmer for another 20 minutes. Then turn off the heat and allow the water in the pan to cool naturally. 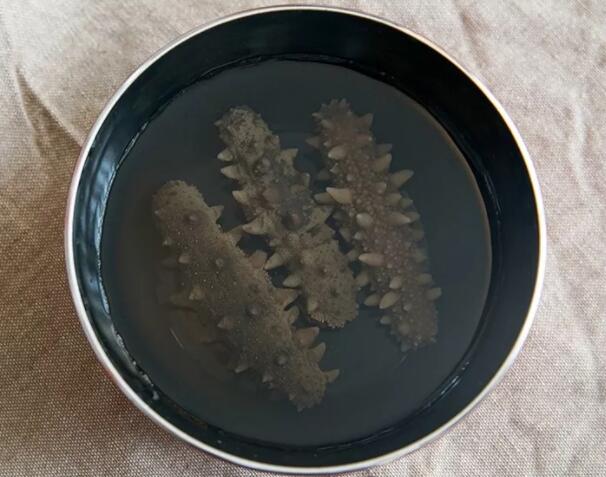 The sea cucumbers after cooking (pictured above)

After the cooking process, the sea cucumbers may shrink a bit after cooling. This is natural, and will regain its size once it is cooked in the dish you prepare.

If you buy large sea cucumber, 20 minutes may not be long enough, it is best to check. There are two kinds of inspection methods: First, use a cloth to pick one up, and pinch the cucumber. If you do not feel anything hard in it, that means that the sea cucumbers are cooked. The second, pick up a sea cucumber in the middle with chopsticks, if the ends sag, it will most likely be done.

After cooking, the water used to cook the sea cucumbers has no further use, so you can discard it. 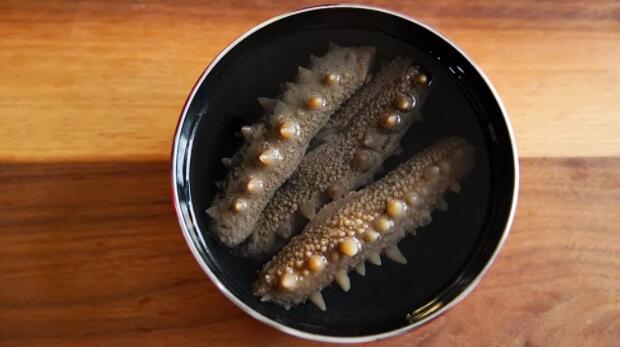 Step 5: After the water in the pot is naturally cooled, the sea cucumbers are removed from the pot and immersed in a basin of fresh water, soaked for 24-48 hours. The water is changed every 12 hours.

After all is done, you will see that they have gained greatly in size.

Please see the sea cucumbers before Rehydrating and after Rehydrating. 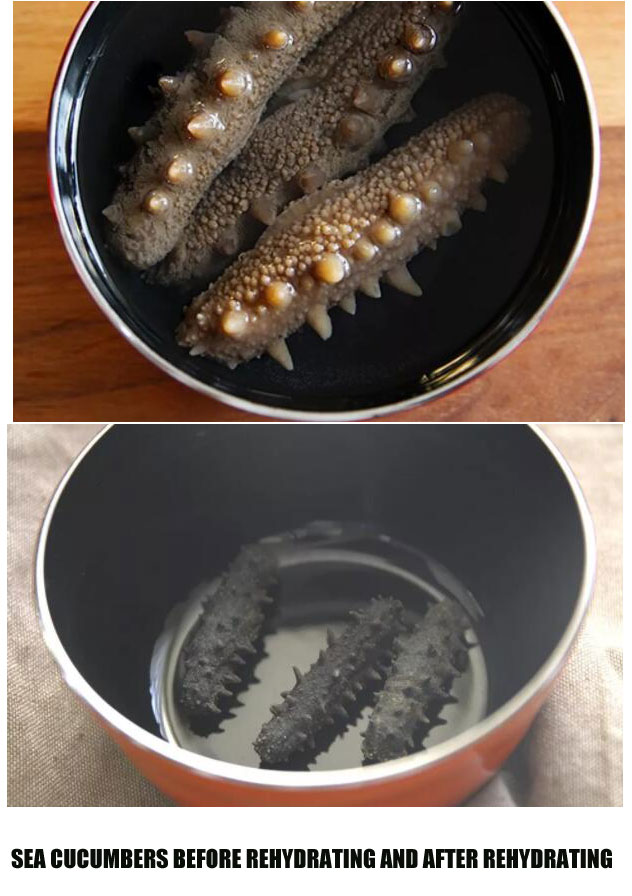 1. During the process of rehydrating- hands, pots, and utensils must all be kept in an oil-free, salt-free and alkali-free state, otherwise it will affect the process, and do not apply hand cream on hands.

2. Since the sea cucumbers will grow large after soaking, it is recommended that you use a larger container to hold the sea cucumbers. The purified water must be free of pollutants and let the sea cucumbers sit loose. Don’t pack them together. (Much like my Pickled Duck Eggs recipe, clean water and utensils are VERY important when performing this process.)

3. Sea cucumber is a low-temperature aquatic product. When it is soaked, it is recommended to use purified water, ordinary cold pure water. If the water temperature is too high, sea cucumber may rot. If you are doing this in the summer, you can simply add ice cubes or put it in the refrigerator.

4. If you have soaked more sea cucumbers than you need, the uneaten portions can be individually sealed in fresh-keeping bags and then left in the fridge to be frozen. Naturally thawed before eating, frozen sea cucumbers are recommended to be eaten within one month.

5. Because sea cucumbers have been boiled for about 20 minutes during the rehydrating process, it is not advisable to stew for too long after finished. Cooking for 40 minutes is almost enough. Do not go over 1 hour. Overcooked sea cucumber will be kind of like chewing gum.

6. Important 1) do not eat sea cucumber within 2 hours of acidic fruit, such as grapes, persimmons, hawthorn, pomegranate, green fruit, etc., otherwise there will be abdominal pain, nausea and vomiting. 2) People with diarrhea should not eat them. 4) People with spleen and stomach deficiency have difficulty digesting them. 5) Infants should not eat sea cucumbers because the digestive system is not fully developed. 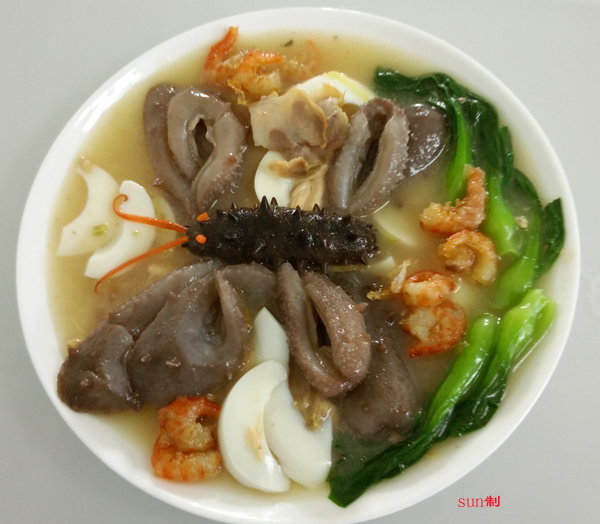 Butterfly Sea Cucumber is a rare Han traditional cuisine in Yangzhou. The dishes are like butterflies flying. The taste is smooth, salty and delicious. 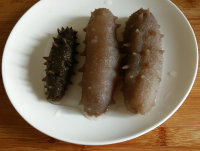 Step 6. add a little salt in the boiling water pot and the small green vegetables until soft, remove

Step 7. Shock the vegetables in cold water, set aside

Step 8. Stir the shrimp in a warm pan with oil

Step 9. Set the cooked shrimp aside

Step 10. Repeat with the bacon

Step 11. Set the bacon aside 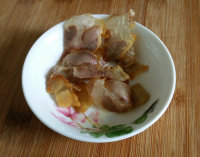 Step 13. take a small pot of oil and add the onion ginger saute

Step 14. Quickly add the soup and the list from seasoning 1, boil

Step 16. Add the sea cucumber, wet starch, and shrimp, stir together a few moments to warm the ingredients 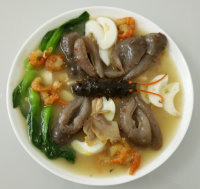