In the Chinese culture circle, there are very few places where you will find a dish featuring fried squid. The symbolism of the squid is not a particularly positive one.

When an employer has decided to lay off employees, these employees are at a disadvantage as they are expected to roll up their belongings and leave.

Either to hide from the fact of being laid-off, or making fun of the situation, the “rolling” of the squid has been connected with the idea of having to pack up your stuff and go as this was a common practice years ago.

It is not the flavor of the squid, but the symbolic action that happens when it is fried. It rolls up like a laid-off employee had to “roll” up their bedrolls from living in the worker’s quarters of a factory. 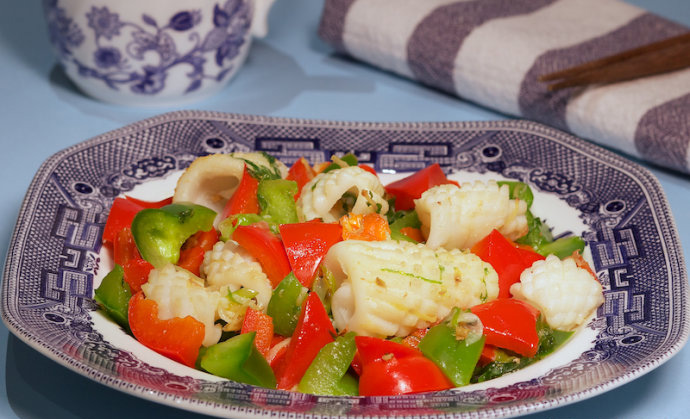 Many people from Hong Kong believe that the bosses of some companies, of the past, felt bad about the market changing and having to shrink their companies by doing employee layoffs.

This dish requires skill in cutting squid rolls. Many people simmered the cut squid in a saucepan and would not see the squid roll up. This directly affected the beauty of the dish. This blog post gives detailed explanations on how to cut squid rolls.

how to cut squid

1.Wash the whole piece of squid first, then spread it on the chopping board and cut it using a sloping knife on the inside of the squid. Be careful not to cut all the way through. After the cutting process, the squid will have a diagonal shaped design from the knife cuts.

2.Cut along the slightly vertical direction of the “diagonal” knifecuts (also be careful not to cut the squid all the way through) so that when the whole squid is cut, you will end up with a “grid”

3.Then the large piece of squid with the grid-like pattern is changed into diamond-shaped strips (the size of the strips can be based on personal preference).

The production method is as follows:

The first step is to deal with the squid.

Clean the squid and lay it on the chopping board. Hold the squid and tear off the end of the squid. Using a knife to get started, lift the skin up until you can grab it with your fingers. Use the knife to put pressure on the squid so that you can gently pull off the rest of the skin. 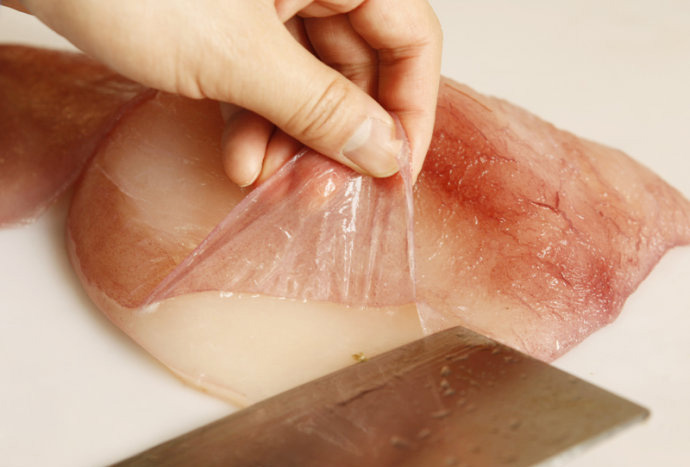 With the inside of the fillet pointing up, first cut a parallel pattern keeping the knife at a forty-five degree angle and cut to depth of three quarters of the flesh. 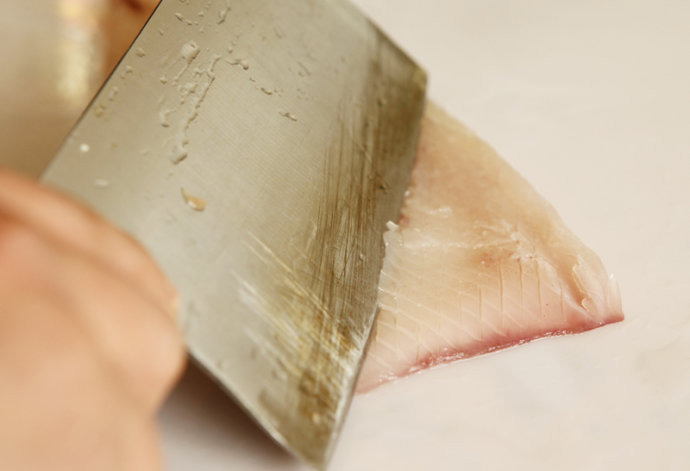 Then, score the flesh in the opposite direction to create a crisscross pattern. The cuts will be at a 90 degrees angle to the first parallel cuts. (Do not apply a great amount of pressure on your knife and allow the weight of your knife to cut the meat. This will ensure that you are not tearing or ripping through the flesh. This will give you a clean score.) 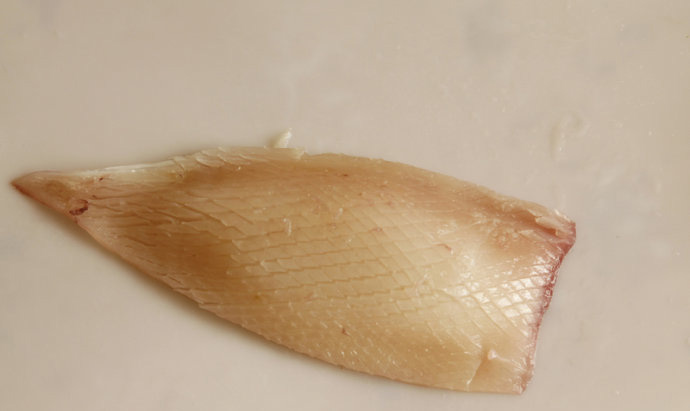 Cut the scored squid into equal pieces the size you want. The squid’s tentacles are to be cut into pieces as well. 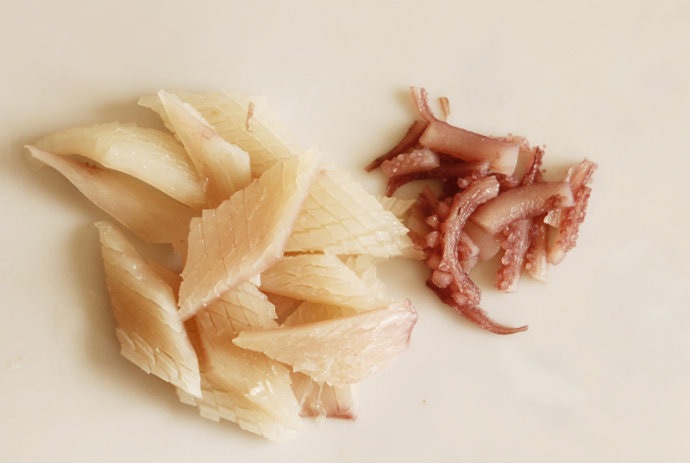 Like all meats and seafood, you should dry the surface moisture before cooking. This is the same for cooking squid. When you dry the surface moisture of the meat, you allow the temperature to rise when fried, as well as reduce the cooking time. The fresher the squid used, the better quality for this dish. If you do use frozen squid, it must be fully thawed so that the temperature of the squid is as close to room temperature as possible. 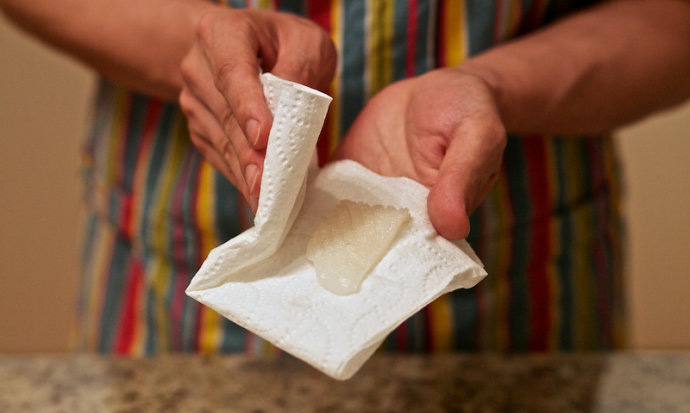 The second step is to prepare the other ingredients. You need to cut the green peppers and red peppers into 1 cm square pieces. 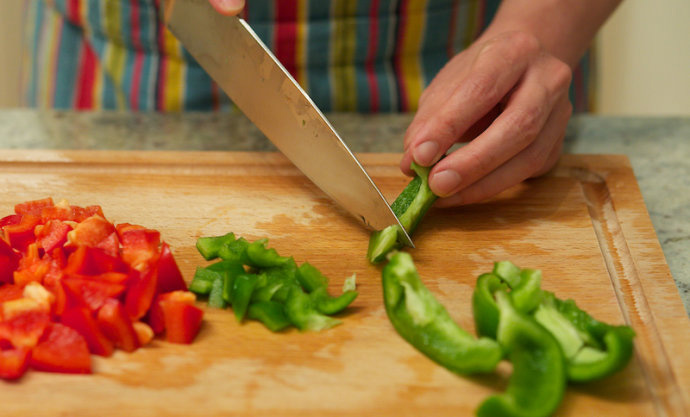 Shallots are to be chopped and the garlic and ginger are to be cut into long thin strips. 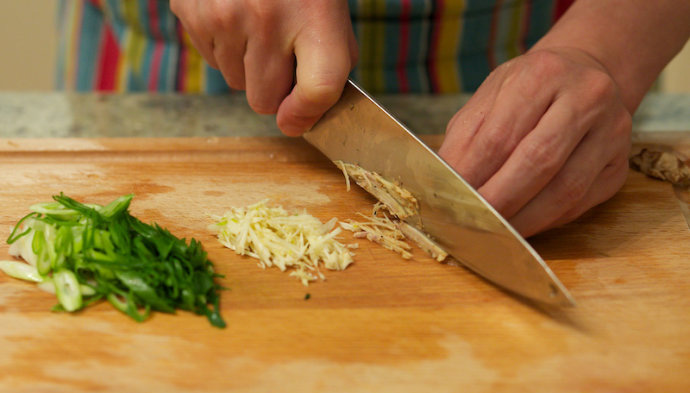 The third step is to stir-fry! Preheat the pan for about 2 minutes (Depending on the weight of the pan, the heavy pan takes longer to preheat than a lighter one.). Then, sprinkle a little bit of vegetable oil in the pan. 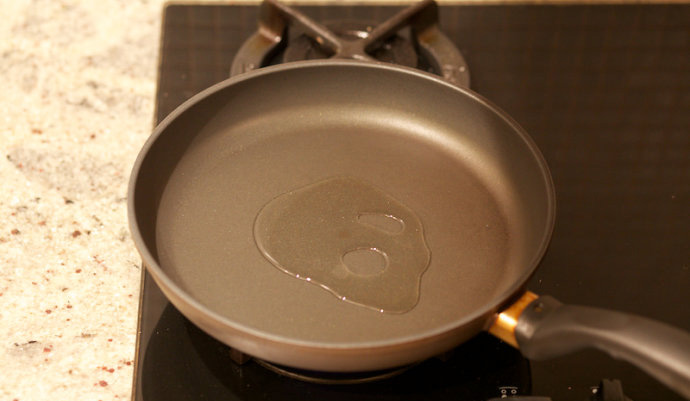 Put the chopped shallots, ginger and garlic into the pan and stir until you smell the aroma. 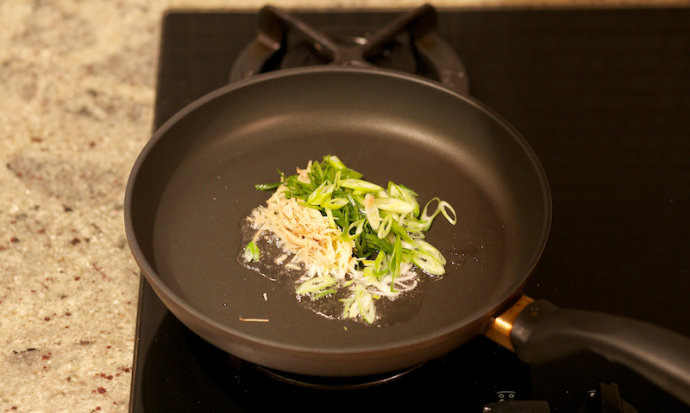 Add the squid to the pan and slightly stir the ingredients, season with salt and continue to fry. 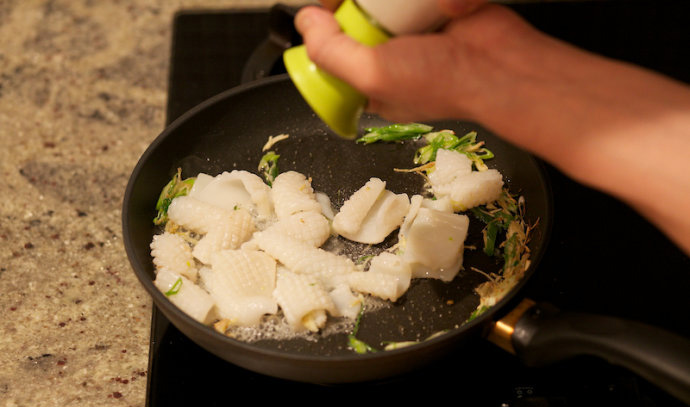 Wait until the squid’s flesh color changes from translucent to white, add the cut green peppers and red peppers, stir fry a few times, add a little salt to taste, and then you can enjoy the dish. 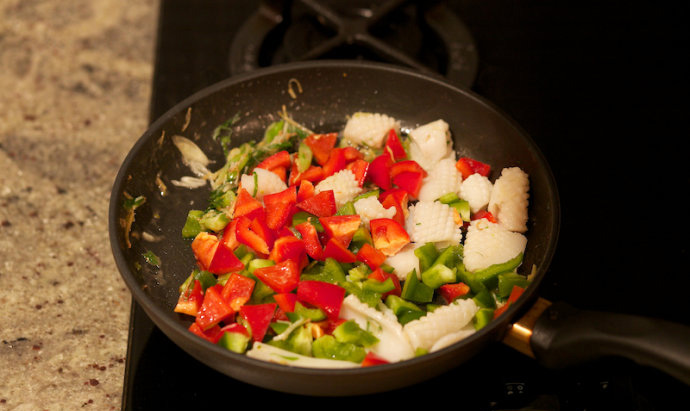 The taste of squid cooked in place is full of elasticity. The green peppers and red peppers absorb the savory flavor and aroma of the squid, shallots, and ginger. All of these ingredients blend well together and provide a mouth-watering deliciousness, even though the mind has long forgotten the hidden meaning behind this dish.

The squid should have the vibrant purple spots on the epidermis/skin centered on the midline, mild smell, and feeling of elasticity. These are the signs of a relatively fresh squid.