Braised beef noodles are Taiwan’s signature dish, even if you haven’t tried it yourself, you will see the name displayed in eateries all over Taiwan.

Many years ago, the Shanghai Xujiahui subway station had a shop called “Eight Beef Noodles” selling the tastiest and juiciest beef noodles but alas! it is no longer there. I have tried many times to find the secret to these great tasting beef noodles and after many failures, I have finally succeeded! 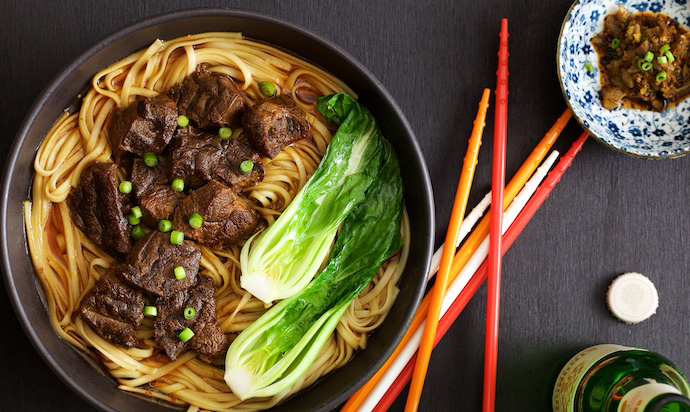 However, braised beef noodles have not enjoyed such status. They have kept a low profile and are considered a humble dish. Not so! 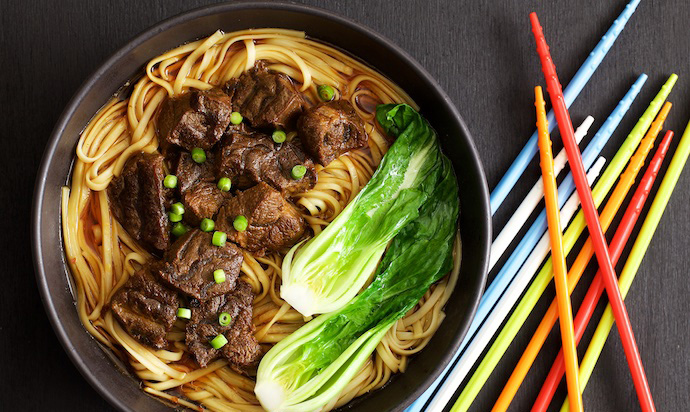 So far we do not know who invented braised beef noodles, but we do know they originated in Taiwan’s Kaohsiung Gangshan Air Force Base.

In 1949, during the Kuomintang civil war, at the time of the defeat of the mainland battle, a large number of national government soldiers and civil servants moved to Taiwan, a total of more than 1 million people, and Taiwan’s total population was fewer than 10 million people.

How to settle these people became a top priority. Higher rank or good luck led to some being assigned to the former Japanese military and political personnel quarters. The rest built simple, temporary dwellings on public land.

People of the same kind tend to congregate together and so settlements of various sizes formed. Residents of these villages had a similar background and a strong sense of identity between each other, and over time as their unique culture formed, so too, did food unique to that culture develop.

The National Government’s Air Force Mechanical School was originally located in Chengdu, Sichuan Province, but moved to Gangshan District, Kaohsiung, Taiwan in 1949. To accommodate these people, 22 government villages were established.

After 1958, the cross-strait large-scale armed conflict subsided, and the village residents’ livelihood gradually became their focus. Most of the veterans were not skilled and could only rely on their memories of exchanging home-made snacks for some income. Business prospered, and Liu Deming who lived in Gang Shan Concord Village, produced one of the most famous bean pastes which became a staple food among the local people.

According to the food historian Professor Luoyao Dong’s research, Taiwan Braised Beef noodles emerged from this background. Sichuan cuisine does not have braised beef noodles, however, the Sichuan veterans in Chengdu created what they called a “small bowl of red soup beef” and noodles, which was equally delicious.

Taiwan braised beef noodles look and taste good, but unfortunately because the origin was not well known, some smart businessmen in the Chinese mainland market-places sold them as “California beef noodles” but in fact they had nothing to do with the United States California, and certainly did not originate there!

After years of training and study, I have gained much experience in cooking beef. When cooking beef, the two most difficult things to achieve are a good full flavor, and secondly, the right texture. Beef texture is quite dense making it difficult to take on flavor from other ingredients, so seasoning needs special attention.

Stewing beef for a long time produces a soft and flaky texture. Many students find it difficult to achieve this but in the following recipe, I teach you how to cook a pot of first-class tasting, tender and juicy braised beef, coupled with smooth soup noodles and mellow, spicy soup. Tasty enough to get anyone hooked!
For my tasty braised beef you will need:

For the braised beef, the choice of beef is very important, one principle is the more tender cuts tend to produce better dishes, beef flank, brisket or sirloin are all good choices. You do not need to use the expensive parts such as the loin. These cuts are best suited to faster, high heat cooking. Slow cooking of these cuts tends to cause loss of flavor rather than improved flavor.

Prepare the beef by cutting it into 2-3 cm square pieces. 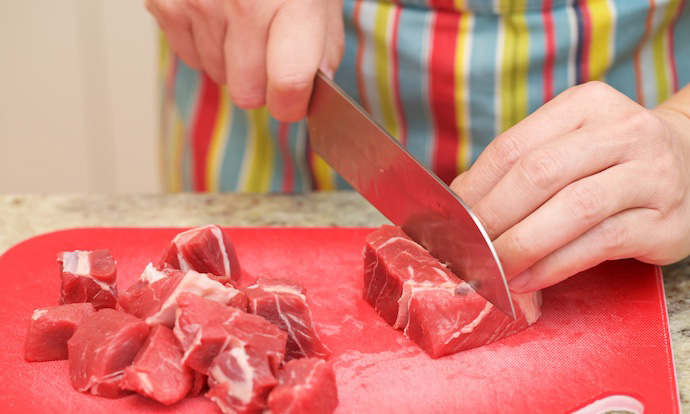 Take a large pot and add 2 liters of water and bring to the boil. Simmer a small amount of the beef at a time until it changes color and the water returns to the boil; remove the beef. Allow the water to come to the boil again before adding the next batch. The beef is cooked in batches for two reasons: to remove the strong beefy taste and to prevent discoloration of the braised beef mixture in the following steps. 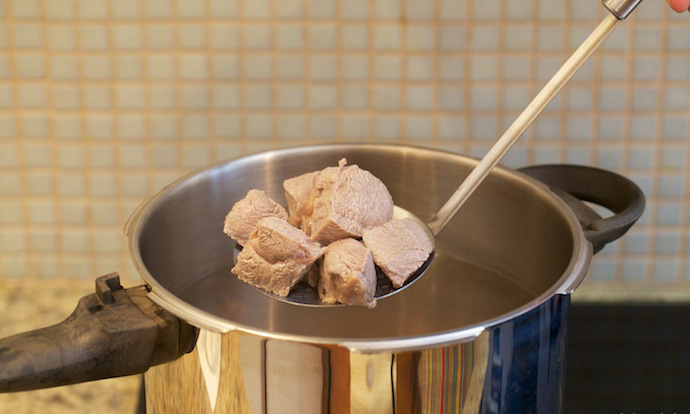 Take a 20cm deep, heavy-based pot and heat 15 ml of vegetable oil. Add the Black Cardamom pod, nutmeg, geraniol, dried red pepper, fennel, pepper, star anise, ginger, scallion and brown sugar, and stir fry constantly until the fragrance is released. Frying in the wok brings out the spices’ fragrance, especially pepper and fennel, more than if it is cooked in water as boiling water does not reach a high enough temperature. 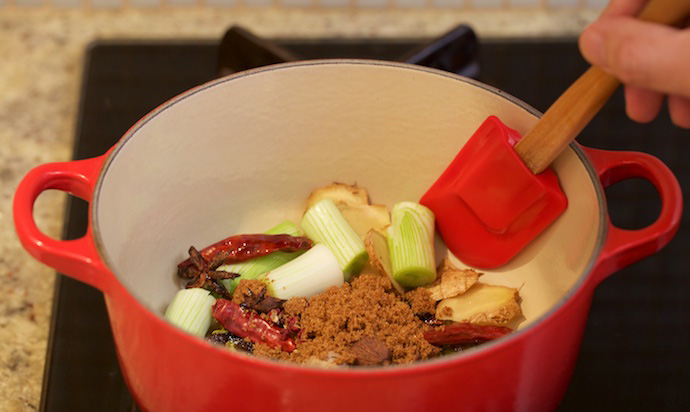 When you can smell the aroma of the spices and they have changed color slightly, pour in half the beef stock (about 375 ml). 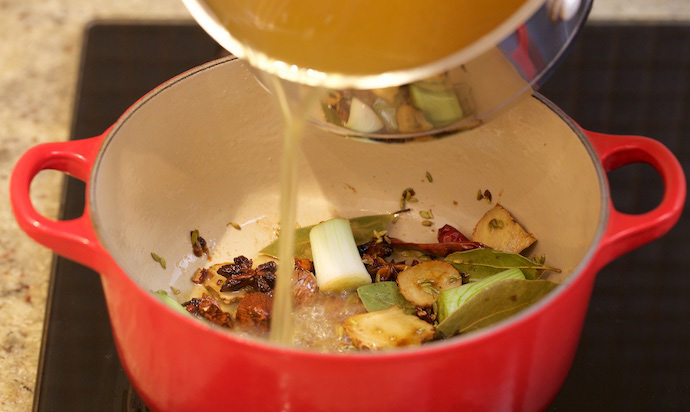 Add the beef and the rest of the beef stock. I use beef stock, and in theory you can replace with water, but the flavor is inferior. The flavor of the stock penetrates the beef with more flavor. This is the first tip for making a well flavored beef stew. 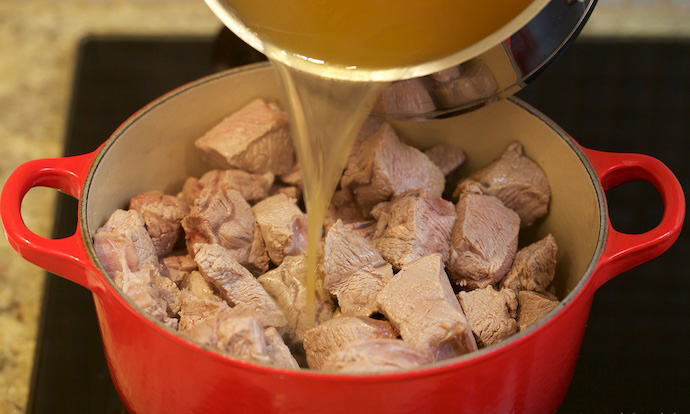 Pour 50 ml of Shaoxing wine into the pot, bring to the boil, reduce the heat, cover and stew for one hour. Students should note that at this point we have not put in any salt spices. The main reason meat stew becomes dry is due to salt drawing out the juices by osmotic pressure. This is the second tip for successful braised beef: first stew the beef for one hour and then add the salt spices, so that the moisture in the beef can be kept to the maximum and the texture is soft and juicy. 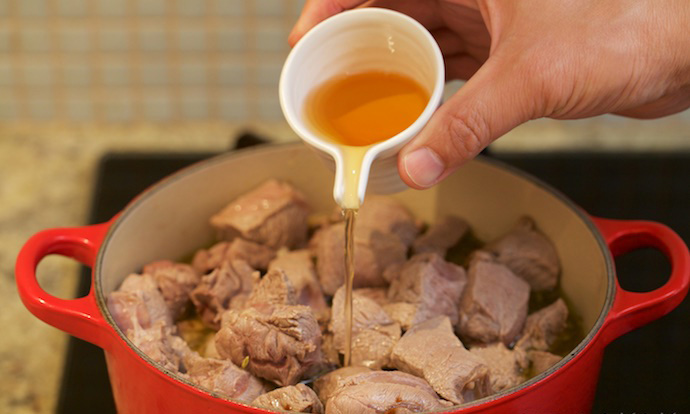 While the beef is stewing, we can prepare the bean paste and tempeh, which is the basis of many Sichuan flavor dishes. To release the fragrance, we need to chop the bean paste. 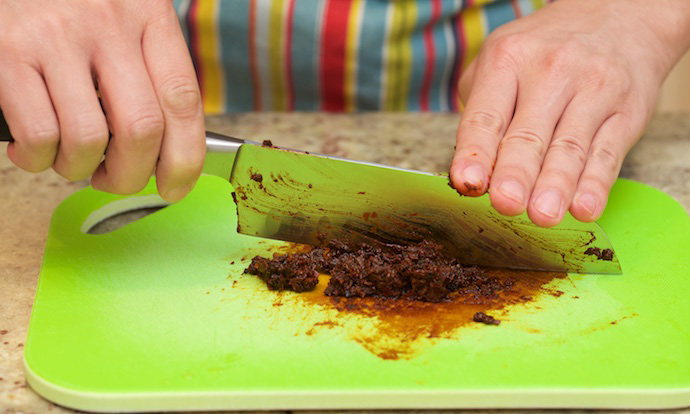 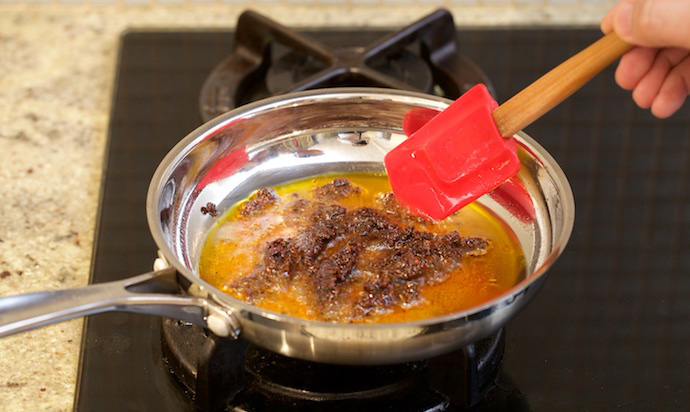 After one hour, the fried bean paste and tempeh will have combined with the oil. Add this mixture into the beef. 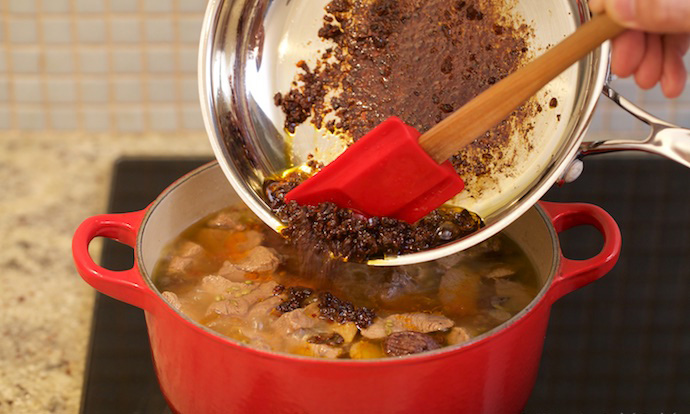 Then stir in 100 ml of soy sauce, replace the lid and stew for another hour. 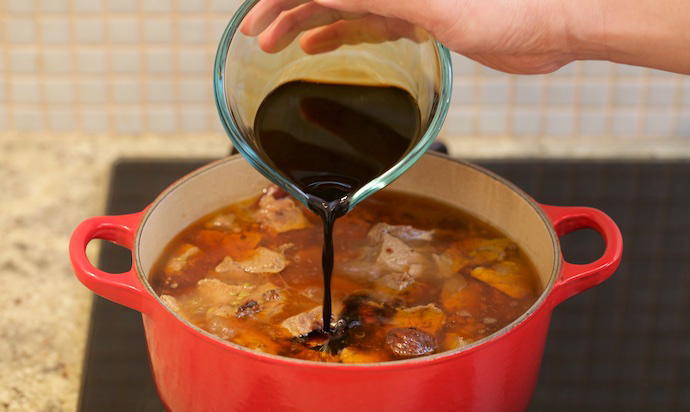 Time to open the lid and take in the mind-blowing aroma! Using chopsticks, take out a piece of the beef to try. It should be tender and juicy, with flavor that lingers in your mouth!
Remove the beef a bit at a time and strain the sauce to remove the larger pieces of spices, and then put the beef back in. If you want even more flavor, place the stew in a sealed container and refrigerate for 24 hours. Reheat on low. 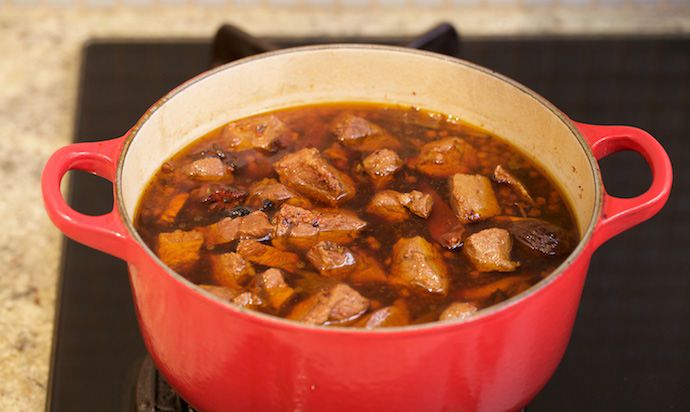 Now we can make braised beef noodles. Into a large saucepan add 2 liters of water and bring to the boil. Cook the noodles. If you are using dry noodles, cook them to the extent you like, if fresh noodles, cook until the noodles float.
Into a serving dish, pour some of the beef stew liquid and place the cooked noodles into the liquid. Place a few pieces of beef (about 8-10 is good) on top of the noodles. Garnish with a few slices of green onion and serve with hot vegetables. Authentic Taiwan braised beef noodles are traditionally accompanied by chopped sautéed sauerkraut. Delicious! 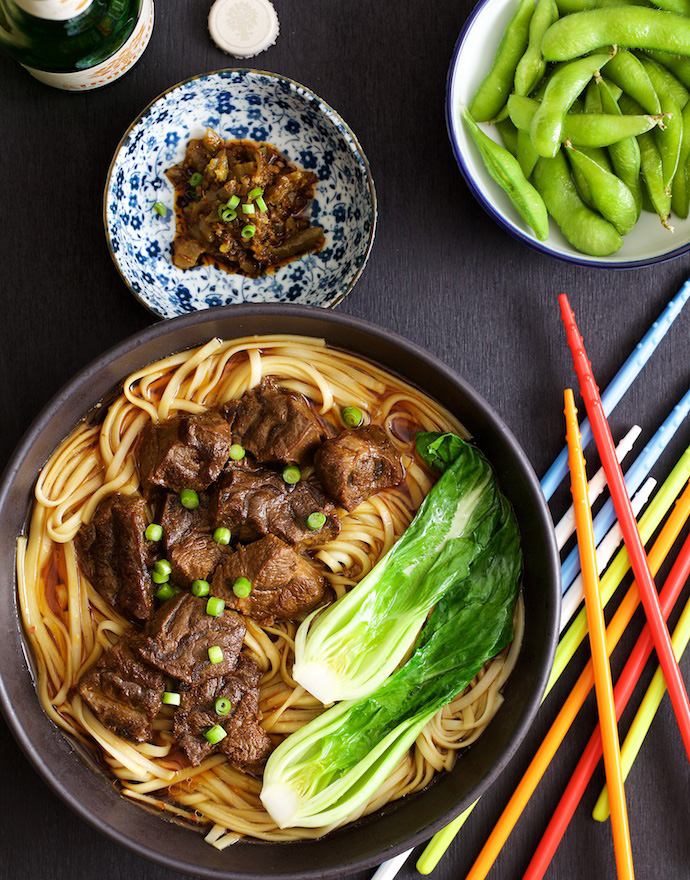