This ancestor to the wife’s cake is a kind of Chinese dim sum (We call it lao po bing in China). The outside is toasted into a seductive golden color, and the layers of the pastry are as thin as cotton tissue.

The crisp and loose cake is very fluffy. Each taste will be better than the last. Sweet as honey! 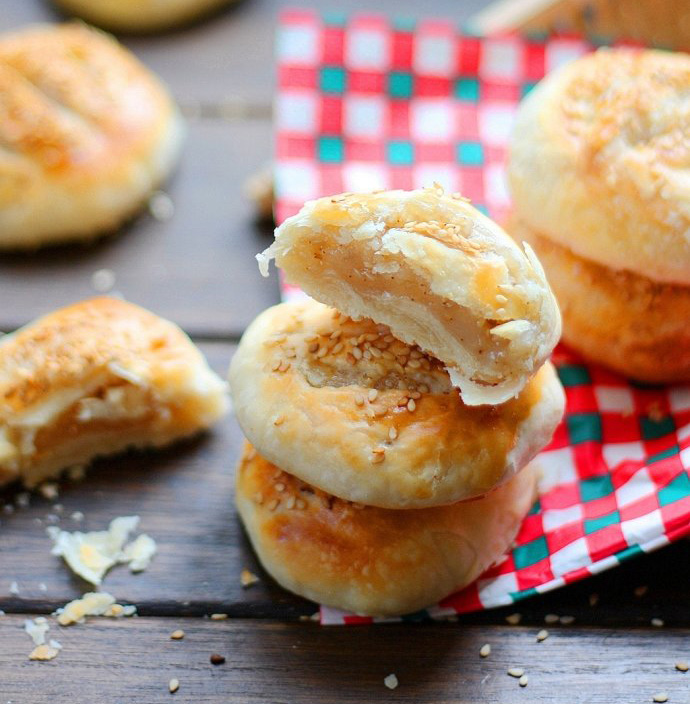 The people were oppressed and plundered very seriously. There were numerous uprisings throughout the country, one of the most recognizable ones was the rebel army commanded by Zhu Yuanzhang.

In the early days of the uprising, because of the many wars at that time, there was often not enough food, and the troops still had to fight. The wife of Yuanzhang came up with something they could eat, such as wheat and wax gourd, and ground it into flour.

She made the cake and distributed it to the sergeants. It was not only convenient to carry, but also could be eaten anywhere and anytime. It helped for the fights to come.

Because the cakes made by such a mess and are unpalatable nowadays, people have updated the method and ingredients of the cake.

People had found wheat flour, cake flour, sugar, and sesame made the cakes what they are today. The cake is very delicious, sweet, and fluffy; this is the ancestor of the wife’s cake.

Baking: middle oven rack, 180 degrees, 20 minutes (adjusted according to your own oven)

Step 5: Put 110 grams of water in glutinous rice filling formula, 60 grams of fine sugar, and 30 grams of salad oil into the pot.

Step 8: Pour in the melon candy and sesame seeds, stir well, let cool and put in the refrigerator for later. 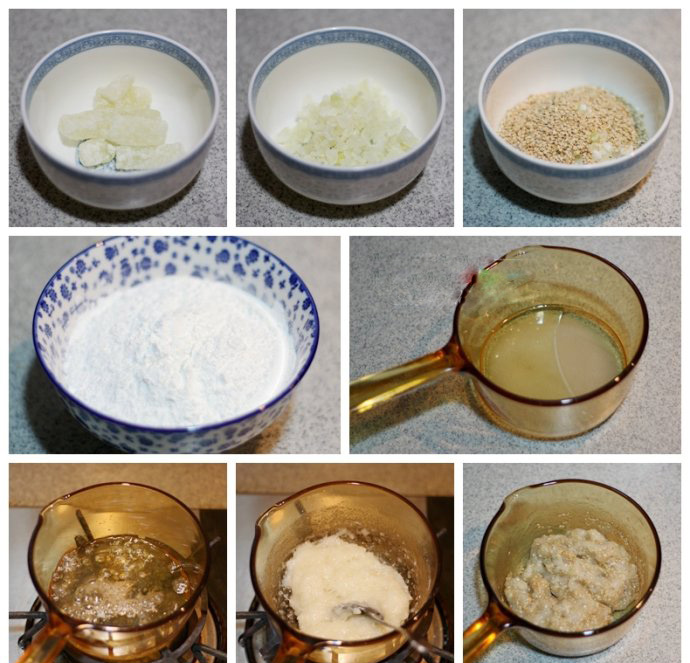 Step 9: Beginning the production of water and lard dough, the lard dough, and building the treats.

Step 10: Add all ingredients from the water and lard dough into a bowl, and knead into a soft uniform dough.

Step 11: Divided into 10 even pieces, ball up, cover with plastic wrap, let it relax.

Step 12: To make the lard dough, put the ingredients stated above into a bowl.

Step 15: After 20 minutes of relaxing the dough, the first balls you made and flatten it, take a ball from the second dough and place onto that.

Step 16: Wrap into a ball and place the pinched side down

Step 17: Press down on it to flatten it out into an oval. 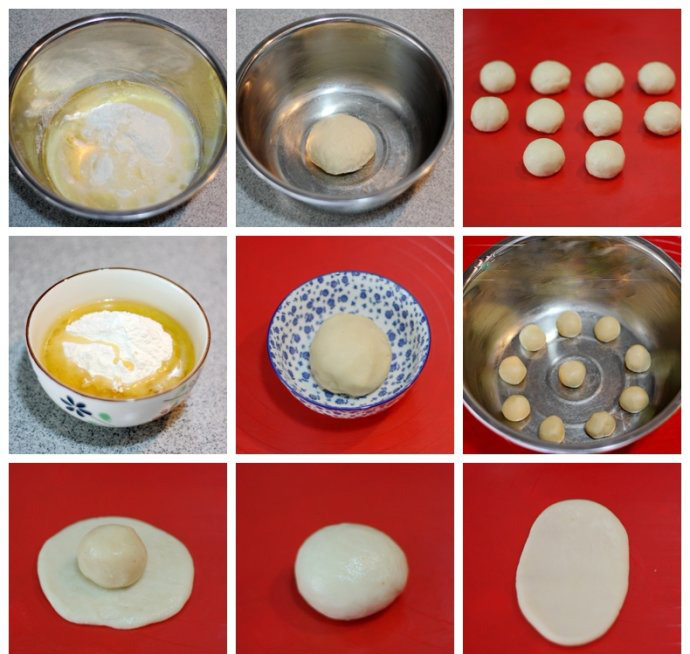 Step 18: Roll towards you

Step 21: Continue this process for all 10 portions

Step 22: Take one of the pieces, roll into a ball and flatten. Place a small portion of the filling in the middle.

Step 23: Wrap the dough around the fillings, and place the pinched side down

Step 24: Continue this for the rest of the portions

Step 25: Brush the top with an egg-wash, sprinkle with sesame seeds, cut three slits in the surface layer of the cake. Then….time to bake! (180 degrees, 20 minutes ) 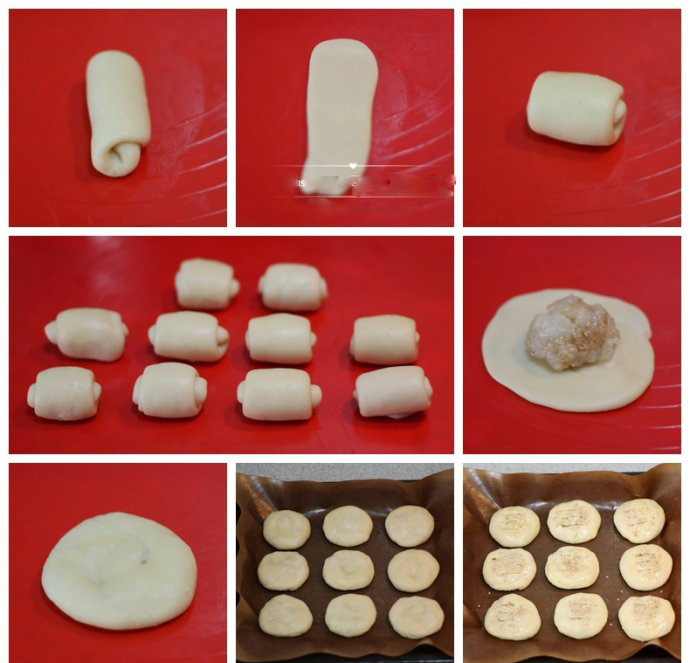 1: The amount of oil in the formula can be replaced with the same amount of butter or common vegetable oil, but lard gives it the best pastry-like effect.

2: The rice filling can be sticky and tough to work with when fresh, so I advise you make it a day in advance and refrigerate overnight. It will then be much easier to manipulate.

3: Finally, when making the slits in the top, try not to cut into the filling in the middle, or whilst baking the filling will start to come out of the middle. It won’t affect the flavor, but will not be as visually appealing. 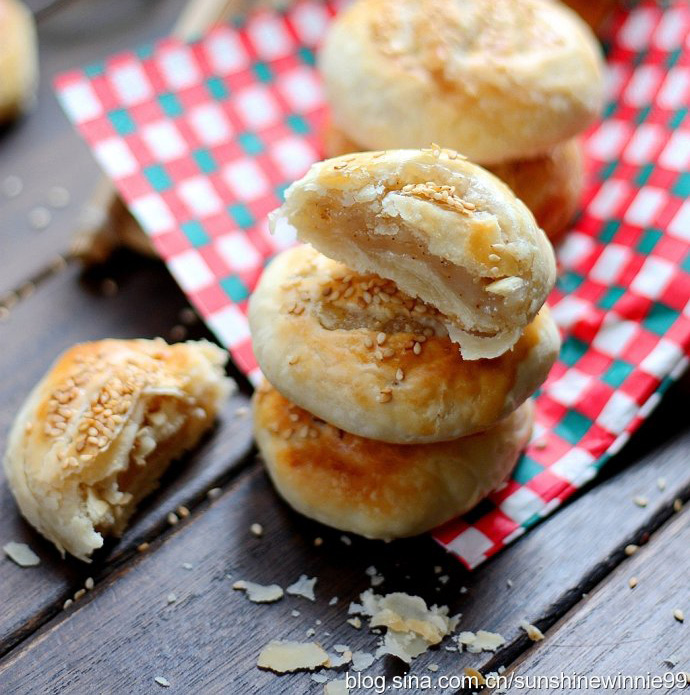