Every province in China has its version of noodles (Such as Lanzhou Beef Noodles), and if you were to ask which is the most delicious, you would get various replies, according to people’s tastes.

But if you were to ask which noodles are the most extravagant everyone would agree that Beijing noodles fit the bill. 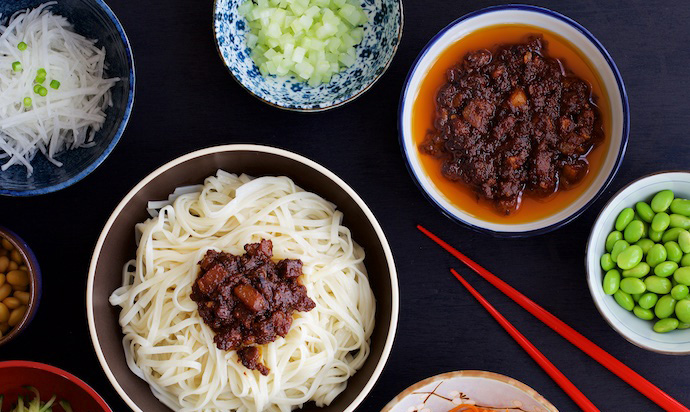 In 1644, the final year of the Ming dynasty, the capital dialect was Jianghuai Mandarin originating from Zhu Yuanzhang who was from Fengyang, Anhui. His many civil servants were from the Jiangsu and Zhejiang areas. On March 19, Zicheng Li captured Beijing, and Emperor Chongzhen committed suicide ending the Ming Dynasty.

The Shaxi (Zicheng Li was from Shanxi) and Henan dialects then became the dominant voice of the capital. However, this rule was not maintained for long, and a month later Beijing City ushered its new leader into the millennium-old capital: Manchu Regent Duoergun and his hundreds of thousands of Eight Banner elite troops. 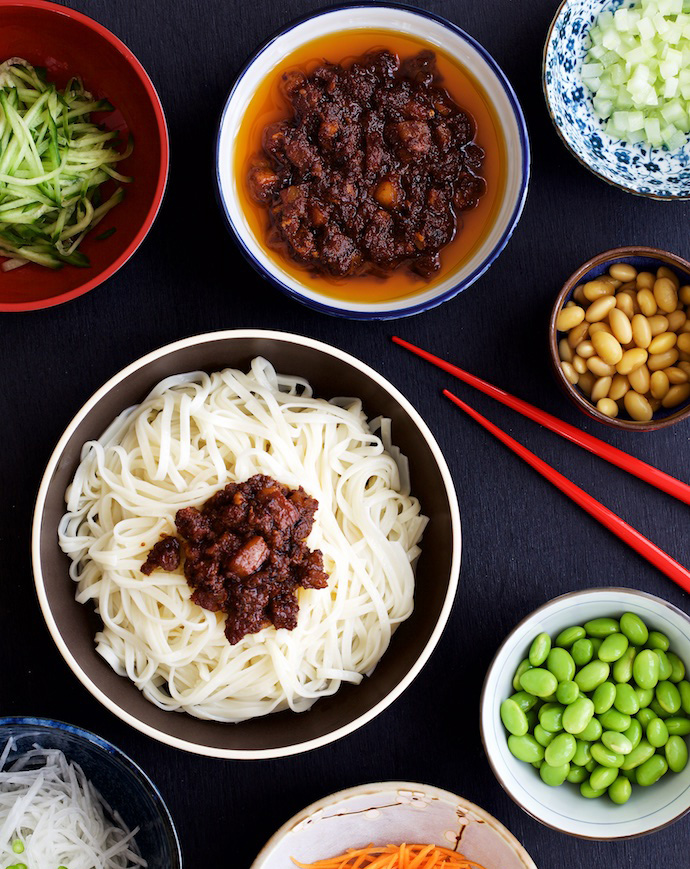 The new master moved all the Chinese people populating the inner city of Beijing to the outer city, allowing only the Eight Banner soldiers to settle within the walls.

Beijing thus became a barracks. Eight Banner soldiers were the heirs of the Qing dynasty fortune, receiving wages every month. Each year the officials were alotted the fresh rice, and the soldiers were given the old, yellow rice. Entry into the Eight Banners was hereditary and descendants were not allowed to engage in other occupations; they were bound to give their lives in protective service to the court.

So, although every Bannerman in Beijing was guaranteed life, it was also a life doomed to worry. Of course, the degree of happiness depended largely on where each stood in the Eight Banners hierarchy. At the bottom of the pyramid, the ordinary Banner soldier received a monthly income of three or four silver, while those at the top, such as the leader, Zuoling received 50 to 100 silver a year.

Before the Qing Dynasty, the Eight Banners did not have any fixed pay; their basic income came by looting, intended to cultivate a ferocious temperament. After entering the city of Beijing with the booty fast running out a wage system was necessarily introduced and life became stable and leisurely. They no longer had to hunt for their daily subsistence and were getting three meals a day. These meals became the focus of their day, everything else being worked around them.

From the middle of the Qing Dynasty, the population increased, but the number of soldiers remained fixed, and had to be maintained, creating a serious problem. When a man filled a vacancy for a soldier his life was guaranteed. As a result of this day to day stability, the people became particularly fond of noodles and perfected them into several amazing dishes.

In the end, it does not matter what the noodles look like; taste is always king. People say that Beijing’s noodles are delicious. But I am afraid that is not the case. Many outsiders attracted by their reputation are let down. Some well-known noodle shops no longer have the essence of the old Beijing. If you want to eat delicious noodles, you need to taste the noodles of old Beijing.

So, why is it when we buy the same noodle dishes, which have all used the same meat and ingredients, and cooked on the same stoves, that they do not all taste the same? Obviously, it is the practice and process that makes the difference. Today I will share my practice so you can bring out the essence of the old Beijing noodle dishes.

Noodles without a fried sauce are like a stage set without the singers, or a play in which the protagonist does not appear. The sauce is the main event. Traditionally fried noodles pay attention to making a small amount of dry fried sauce. The dry fried sauce made in a large pan lacks the same flavor as it does when made in a small pan.

Dry frying allows the water in the sauce to evaporate quickly and also dissipates the alcohol and acetic acid, making a richer sauce. As most of the water evaporates, the oil temperature continues to rise so that the starch in the soy paste caramelizes and darkens to a bright red. It thickens to a consistency that when you run a chopstick through the sauce, it stays in place.

The general complaint with making “dry fried” sauce is that it takes half an hour to mix the sauce and that the noodles are too salty. I address these two issues with my improved recipe.
Here is what you will need:

Step 1
Dice the meat. If the pork is proving difficult to cut, I recommend putting it in the freezer to harden it or cut it while it is still partially frozen. 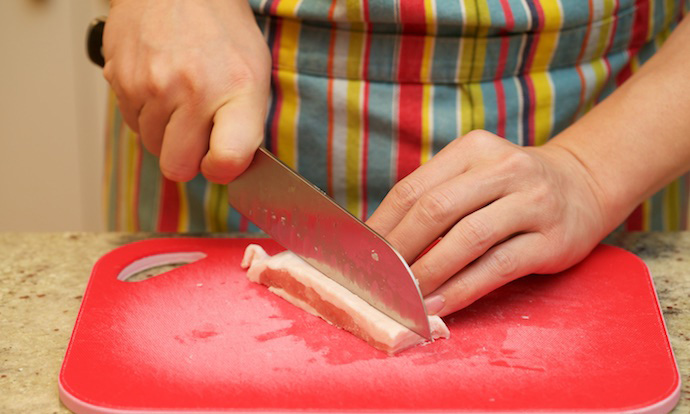 Dice the pork into 1cm cubes. 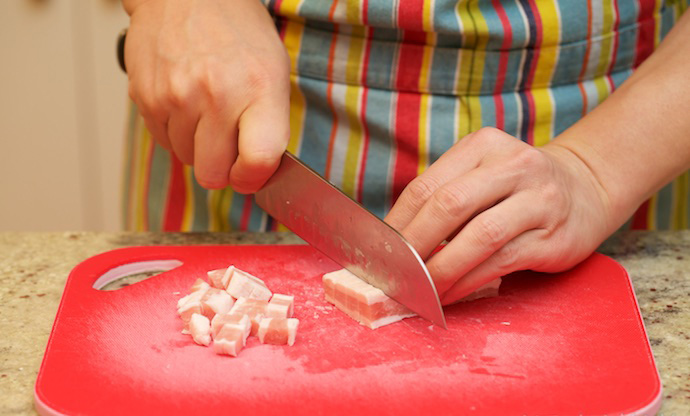 Step 2
Prepare the other ingredients.
Cut the green onion lengthwise and then slice, the finer, the better. You can also use a food processor to do this step.
Slice the garlic into thin strips. 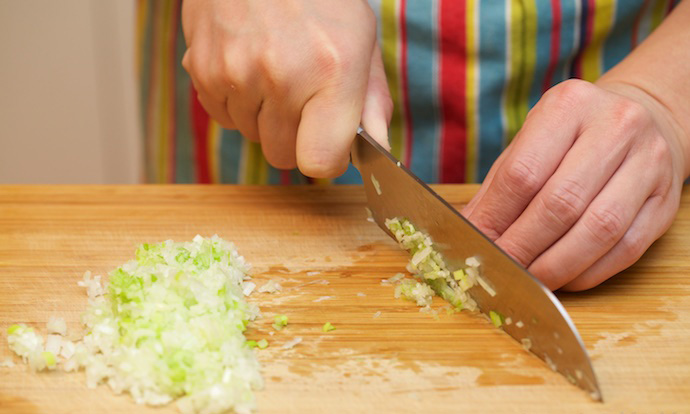 Cut the ginger very finely, also the finer, the better, as it distributes more flavor. 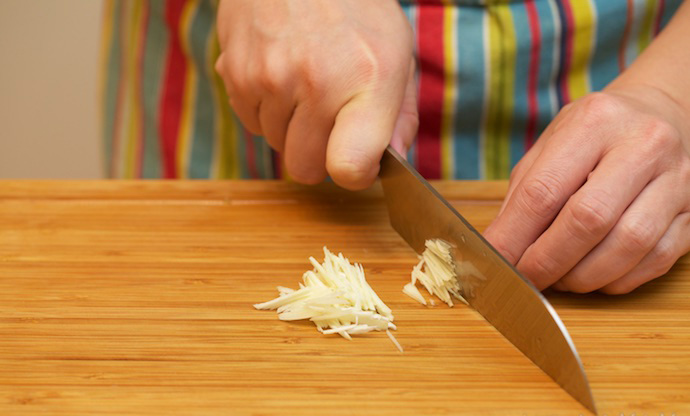 Chop the Pixian bean paste to a minced consistency. 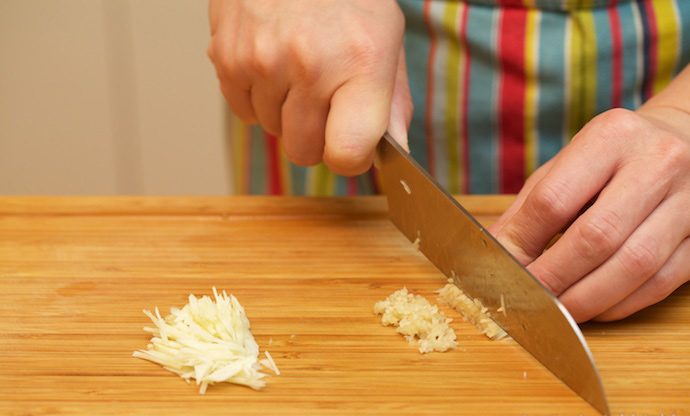 The bean paste and tempeh must be chopped finely so their flavor can be fully released. 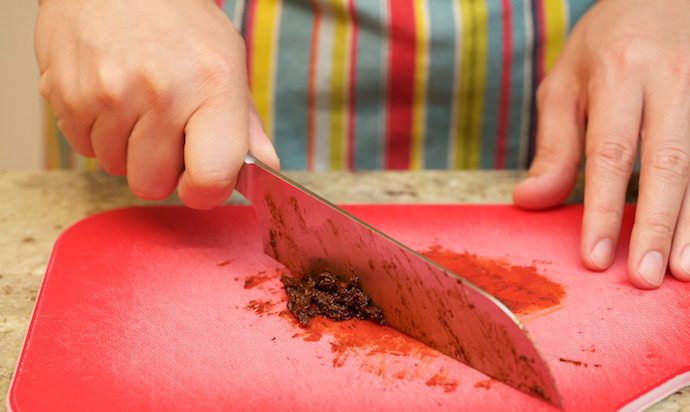 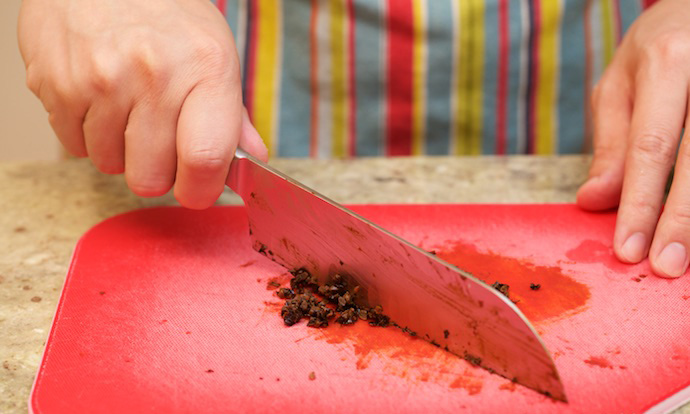 Now you have all the ingredients for the sauce ready.

It is widespread practice to dilute the soy paste with hot water and then heat it with the diced meat. But to achieve the “fried” effect, all the water must be evaporated a process which is not easy to control. An alternative way is to add the ingredients directly to the pan, that is, the so-called “dry fried.”

Take a heavy based soup pot and warm up for 1 minute. Add 45 ml of rapeseed oil, soy paste, chopped bean paste and tempeh. Heat slowly on low for 20 minutes, until the water partly evaporates and the color deepens. When the fried sauce is very sticky and fragrant, remove it from the stove and put aside. 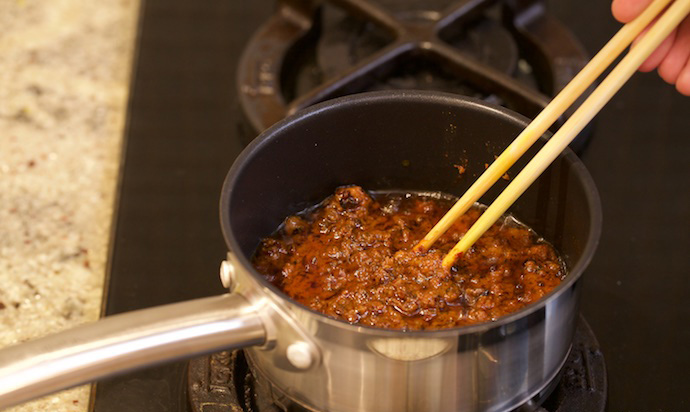 Preheat a separate thick based pan on medium for 1 minute (remember overheating causes sticking) and add 20 ml of rapeseed oil, the chopped green onion, garlic and ginger. Stir fry constantly, so the moisture in the ginger and garlic slowly evaporates, being careful not to burn them.

This should take about 15 minutes. I use more green onions in this recipe for several reasons. Besides increasing the green onion flavor, they also act as a filler, reduce the saltiness and make the sauce thicker. A thicker sauce will adhere to the noodles better. 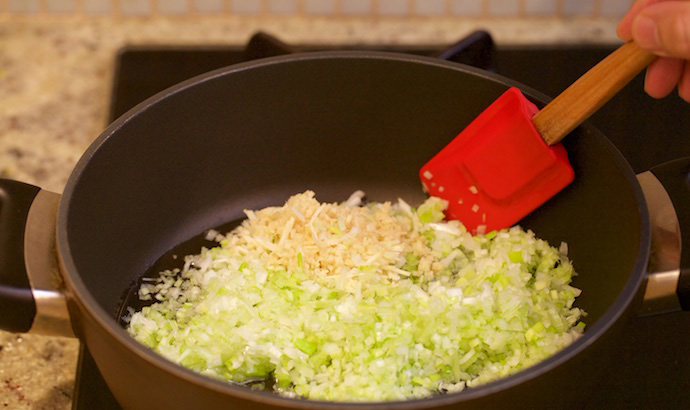 Once the moisture from the onion, ginger and garlic has almost evaporated, add in the chopped pork and stir fry on high heat. 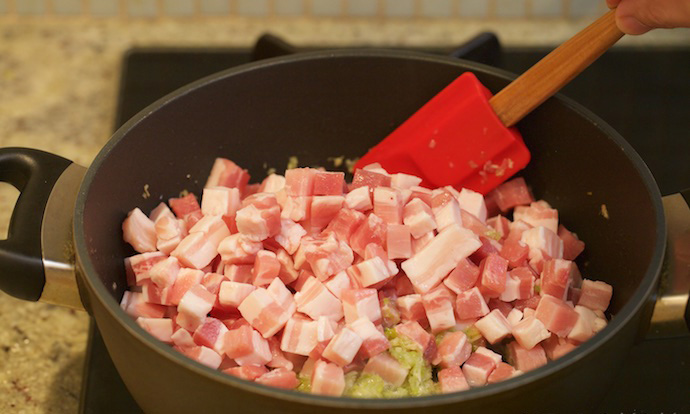 Add the two star anise to make the fried sauce even more fragrant. 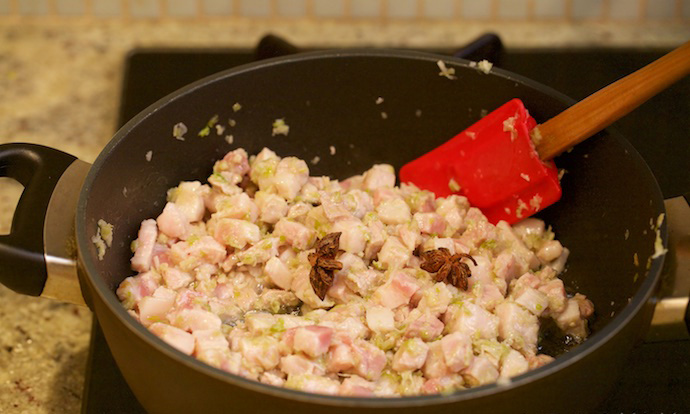 After about 10 minutes of frying, the mixture will become pale in color and begin to build up some grease from the meat. At this point add in the soy paste, bean paste and tempeh mixture. 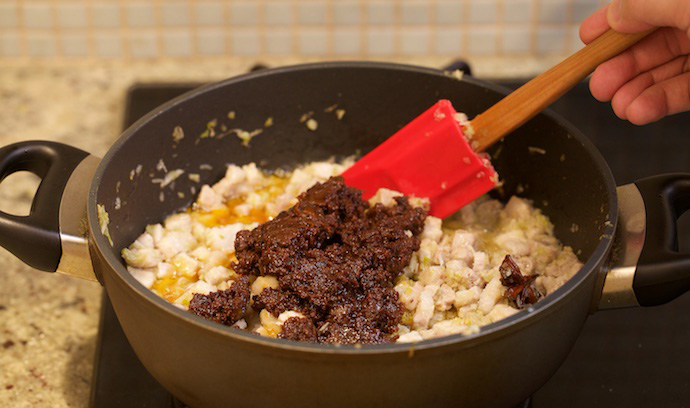 Stir fry evenly to combine then add the brown sugar, continuing to stir. Although the nutritional value of brown sugar is no different to white sugar, the flavor is very different, brown sugar being richer. 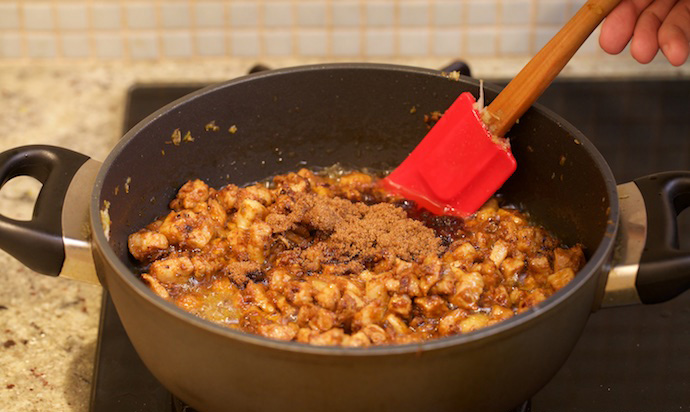 At this point the sauce does not look like much, and you may be a tad disappointed, but don’t worry, the last weapon is still to come: the stock. Pour 150 ml of stock into the pot and stir to combine. The fried sauce gradually combines with the stock, coating the diced pork. Continue to heat, so that the water in the stock evaporates and the sauce thickens becoming sticky.

When you can run a spatula through the sauce and have it stay apart and not immediately rejoin, you have reached the right consistency. When the sauce reaches this level of stickiness, it has become “small bowl dry fried” fried sauce. This process requires continuously scraping the wall and bottom of the pot with a silicon spatula to stop the sauce sticking to the sides. 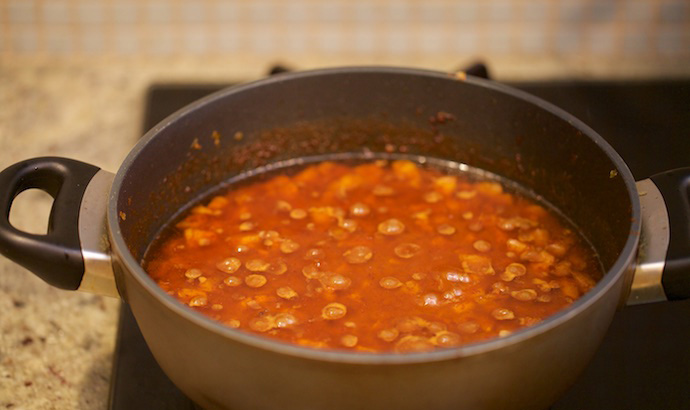 You will get the most enjoyment from this meal by eating the fried sauce as soon as possible. Otherwise it will become salty, and the meat hardened. 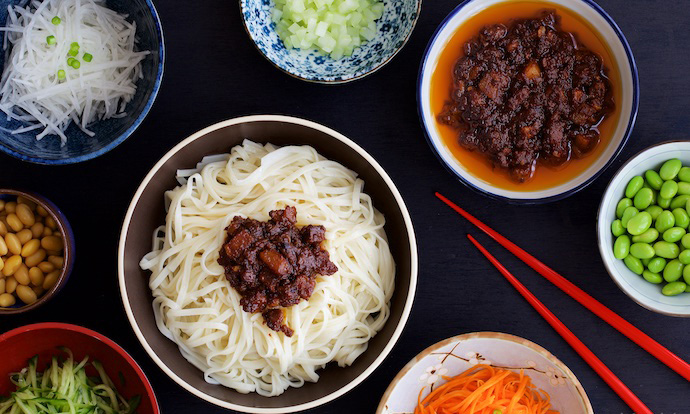