A simple and great way to add an extra kick to your dishes- prepare this basic Hunan Chili Pepper recipe for an added boost to the list of ingredients in your fridge that is very versatile!

Chili peppers are native to Central and South America and are widely used by the indigenous peoples. It was inferred 7,000 years ago that peppers began to be used by humans.

After Columbus discovered the New World of the Americas, peppers were introduced to Europe, and then the Portuguese merchants introduced them to the Asian countries in the late Ming Dynasty. 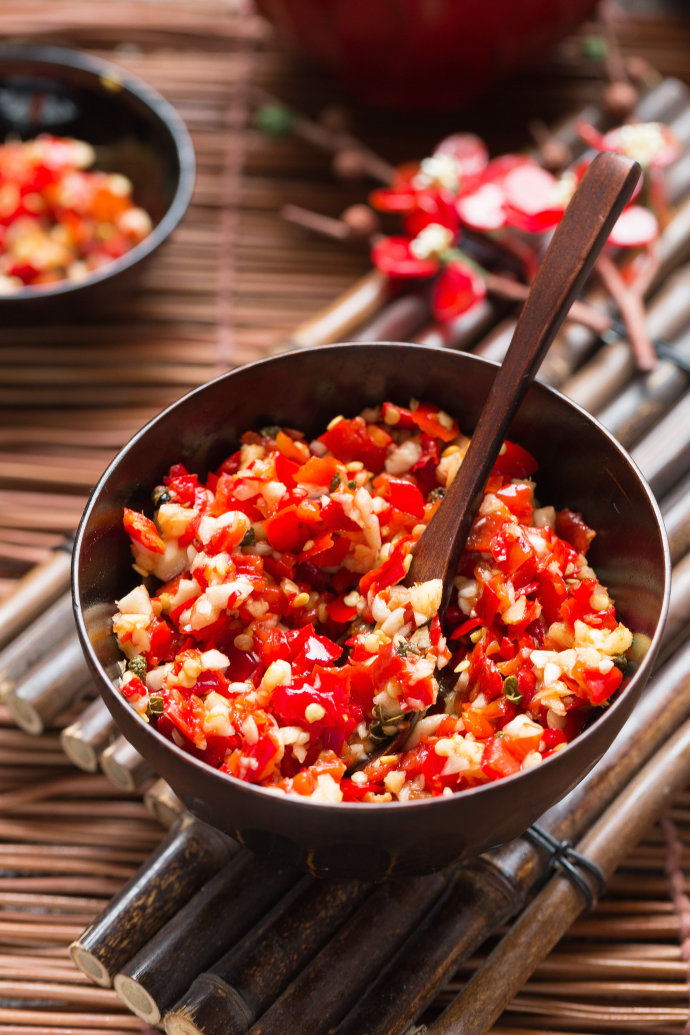 The peppers introduced to China set off a diet revolution, and greatly reduced the use of traditional spices, Sichuan peppercorn, ginger, and so on.

Due to the traffic and communication at that time and the economic situation, it did not spread to the countryside. But now, there is a trend of eating spicy peppers in the country, and chili peppers have gradually captured more and more areas that are not traditionally spicy.

The Chinese are used to picking vegetables for long-term preservation. 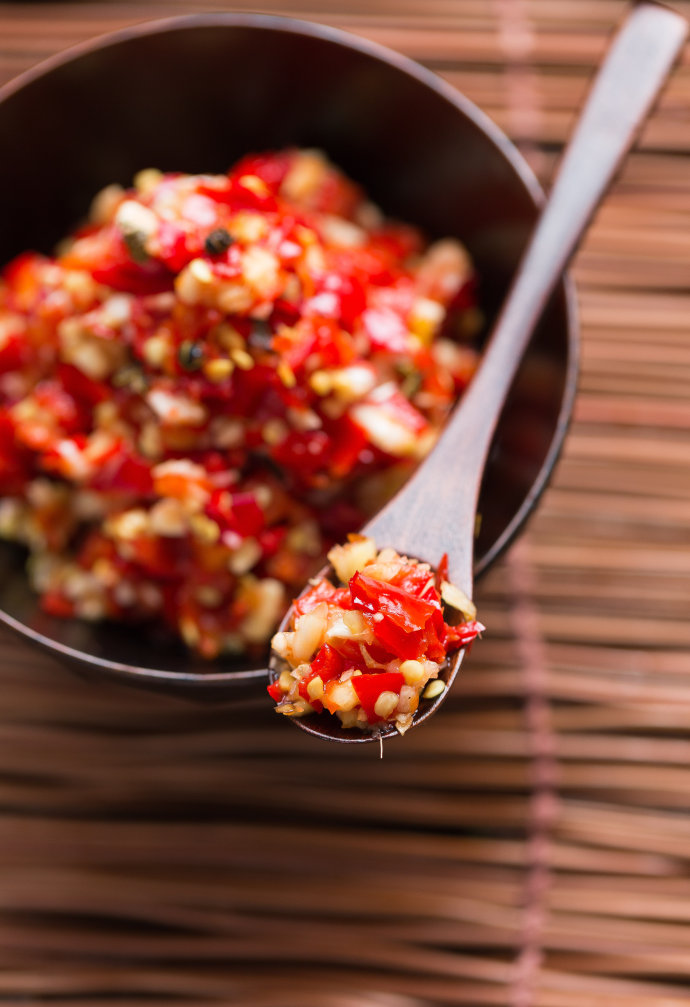 After chili peppers entered China, a variety of pepper sauces were created, which greatly enriched the taste of their most popular foods.

Hunan is one of the provinces where people who live there love to eat spicy food as Sichuan province in China.

Today I will introduce you to a universal Chili Pepper Sauces (some people call hunan chili sauce) that I have experience with. Because it is a very large amount, in addition to eating it yourself, it can be divided into jars for relatives and friends to enjoy also.

My secret recipe (spicy garlic sauce) can be used to fry potatoes, bean sprouts, fried chicken, scrambled eggs, stir-fried meat, steamed tofu, steamed fish, mixed with preserved eggs, and other sauces with a few spoons to taste. These can even be used with noodles or white rice. 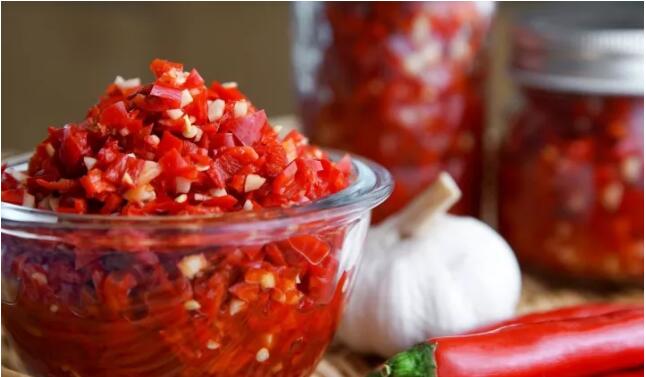 Step 1: Break apart the cloves of garlic and soak in warm water for 30 minutes. Wash the chili peppers and dry them in the meantime. 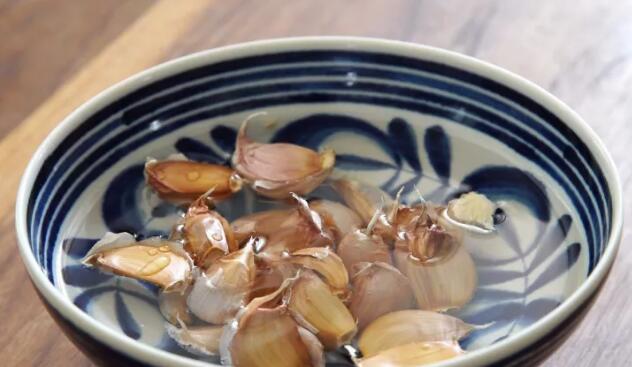 (You can also use a food processor to prepare the ginger and garlic, just do not process too much.)

Step 3: Remove the tops of the chili peppers (if you want them less spicy, remove the seeds also. You can keep or discard as many seeds as you want per your preference)

(You can also use a food processor for this part, but be very careful to process very little)

Step 5: Add all the prepared ingredients into a large bowl. 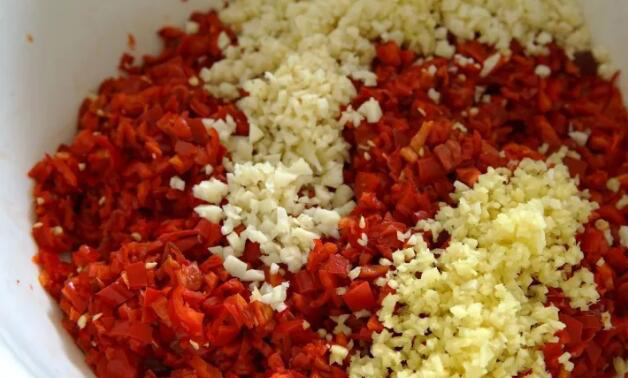 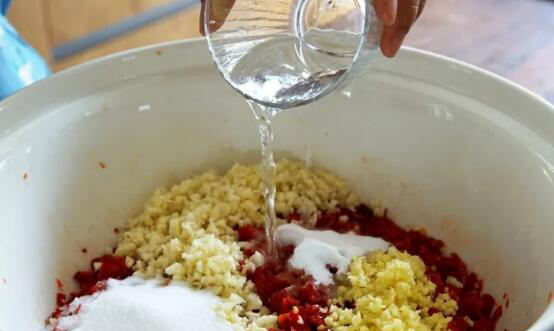 Step 7: Mix all the ingredients well.

Step 8: Cover with plastic wrap and leave it at room temperature for one day.

Step 9: They can then be divided into jars and stored in the refrigerator. Wait at least one week before enjoying.

1. When making hunan chili sauce, all ingredients and utensils should be clean and oil-free

2. When preparing the hunan chili sauce with a food processor, do not process too much. Don’t use high speeds

3. I use sea salt, so the amount is relatively large. If you use regular salt, you can have a little less. It is always best to use less salt either way, as you can add salt when cooking.

4. The amount of salt is very important. If the salt is reduced too much, the hunan chili sauce tastes sour and it is not easy to store. If there is too much, it is too salty to eat. If you prefer a slightly sour hunan chili sauce, you can put a little less salt.

5. It is also very important the jars used for storing it are clean and water and oil free.